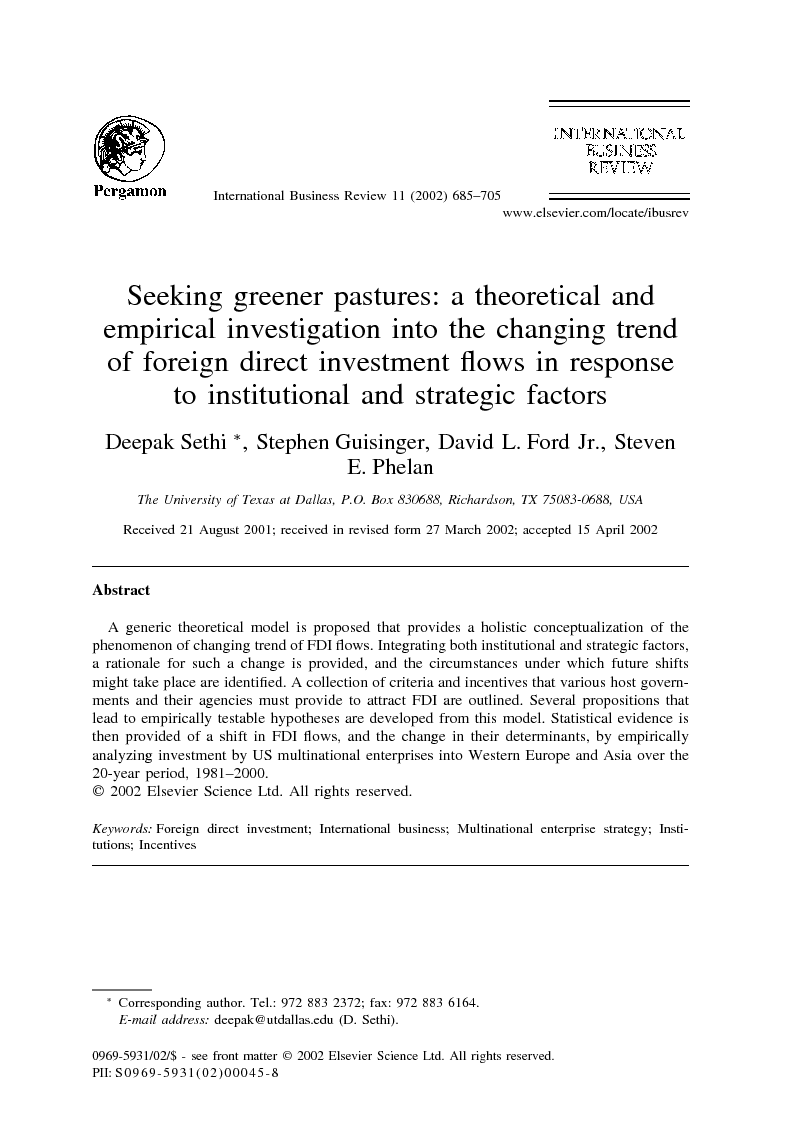 A generic theoretical model is proposed that provides a holistic conceptualization of the phenomenon of changing trend of FDI flows. Integrating both institutional and strategic factors, a rationale for such a change is provided, and the circumstances under which future shifts might take place are identified. A collection of criteria and incentives that various host governments and their agencies must provide to attract FDI are outlined. Several propositions that lead to empirically testable hypotheses are developed from this model. Statistical evidence is then provided of a shift in FDI flows, and the change in their determinants, by empirically analyzing investment by US multinational enterprises into Western Europe and Asia over the 20-year period, 1981–2000.

Globalization is the mantra of a rapidly integrating world economy. International trade, which has increased phenomenally in the last few decades, is expected to grow much more rapidly. But the acceleration in foreign direct investment (FDI) flows has been even more spectacular, far outstripping both world trade and world output. Between 1984 and 1998 the worldwide flow of FDI increased by over 1000%, while world trade grew by 91%, and world output merely by 27% (WTO, 1998). Hence, this paper focuses only upon the FDI flows, the more significant component of globalization, and not on international trade. Globalization of markets and production is being facilitated by the progressive liberalization of most economies, resulting in lower investment barriers. For instance, while between 1991 and 1996, over 100 countries made 599 changes to liberalize FDI regulations, during 1997 alone, 76 countries made 151 such regulatory changes (United Nations, 1998). Implicit in these statistics, and explicitly highlighted in the UN/WTO annual reports is the key role often played by governments, and institutions under their aegis, in attracting FDI. These reports also indicate that FDI is no longer flowing to the traditional destinations, and that its determinants and motive have changed. The changing trend of investments by multinational enterprises (MNEs) to new destinations, however, cannot entirely be explained by the liberalization measures undertaken by governments, or its institutions, like the inward investment agencies (IIAs) ( Mudambi, 1999). Other factors also are obviously involved. FDI has seldom been envisioned holistically, since researchers have often taken different snapshots of the phenomenon, through respective theoretical lenses. Combining two or more perspectives can thus be useful, as this could yield a more realistic conceptualization, which offers better explanations for the changes in the determinants and destinations of FDI flows. However, the sheer complexity of the international business environment (IBE) does not allow a single model to fully incorporate all FDI factors through time, for all MNEs, and for all countries. Hence this study attempts to integrate only the macro-economic, institutional, and strategic aspects. The issue of the level of analysis, however, needs to be addressed first. FDI is a firm level decision, one that evolves from the firm’s idiosyncratic strategic objectives in the prevailing IBE. The levels of development in different countries, and their governments’ policies, also differentially affect FDI decisions. But, FDI trends indicate that MNEs often invest in a particular country or region almost in droves, notwithstanding variations in individual investment decisions. There is also a bandwagon effect to exploit emerging markets, for reasons of oligopolistic rivalry ( Knickerbocker, 1973). Such shifts in FDI flows over time could therefore be analyzed at a country level of analysis, since the determinants under investigation have a homogenous effect on all MNEs ( Freeman, 1978). Our approach thus incorporates country-level data in the analyses. The need to integrate institutions into theory, to facilitate designing of appropriate incentive structures, can hardly be over-emphasized. The foregoing statistics amply illustrate the success of various institutional measures in attracting FDI, and in enhancing such flows. But this paper argues that institutional support is merely one element, howsoever significant, of the entire phenomenon. Strategic compulsions facing MNEs also need to be considered. Even with the best of incentives an IIA would fail to attract FDI if the country had poor infrastructure, and political/economic instability. Even if those were sound, but the country was neither a large market, nor a low-wage haven, then again investment incentives were unlikely to work. Many examples of under-developed and politically/economically unstable countries in Africa, Latin America, or Central Asia could be cited in this regard. Conversely, MNEs unencumbered by severe competitive pressures in the original FDI destinations might deem shifting future investments to less lucrative locations unnecessary, despite incentives. However, the same MNEs might readily move to an unattractive location, even without incentives, if their rivals were entering that market. Consequently, for a correct perspective of the phenomenon, its holistic conceptualization must integrate the host countries’ macro-economic and institutional incentive aspects, along with the MNEs’ strategy compulsions. This paper, therefore, provides a rationale for the changing trend of FDI flows that integrates institutional and strategic factors. It amplifies the criteria for the incentives that governments must provide to attract FDI. Propositions, and empirically testable hypotheses, are developed from the model. The paper then provides statistical evidence of the changing trend of FDI flows by empirically analyzing US FDI into Western Europe and Asia over 20 years (1981–2000). Evidence of changes in determinants of US FDI flows is also provided. However, the institutional incentives posited in the generic model are not empirically tested, as that would require entirely different variables and statistical model. Given the vast scope, verification of the latter aspect is left to another paper. The contributions of this study, therefore, are (1) development of a generic model that provides a more realistic conceptualization of FDI by integrating both, the institutional and strategic factors; (2) based thereupon, providing a rationale for the shift in the trend of FDI flows; and (3) providing empirical evidence of the changing pattern of US FDI into Western Europe and Asia, and the changes in its determinants.

The summary of the tests of all hypotheses tabulated in Table 4 provides ample empirical evidence of the main contention of this study that there is a significant shift of US FDI from the culturally proximate, developed countries of Western Europe, to the developing countries in Asia. With aggregate investment stock of US FDI in Western Europe and Asia as the dependent variable, Model 1 reflects the historical position and traditional determinants of those investments. The signs and significance level of coefficients show that historically more US FDI has gone into Western European countries (high GNPs and low populations than Asian countries, and also lower country risk). Cultural proximity to USA did matter, with all four attributes being negative and significant at the 0.001 level. Thus all traditional determinants found significant in previous studies stand confirmed in this model too. Model 2, with investment flows as the dependent variable, aims at ascertaining changes in the traditional determinants. A comparison of the coefficients of Models 1 and 2 confirms those changes. They show that now more US FDI flows to the high population, low-GNP, culturally distant developing countries. Hypothesis 1 is thus supported. It is further supported since coefficients in Models 3and 4—the three year snapshots of US FDI at the beginning and the end of the 20-year period—also show a reversal in signs and significance level.