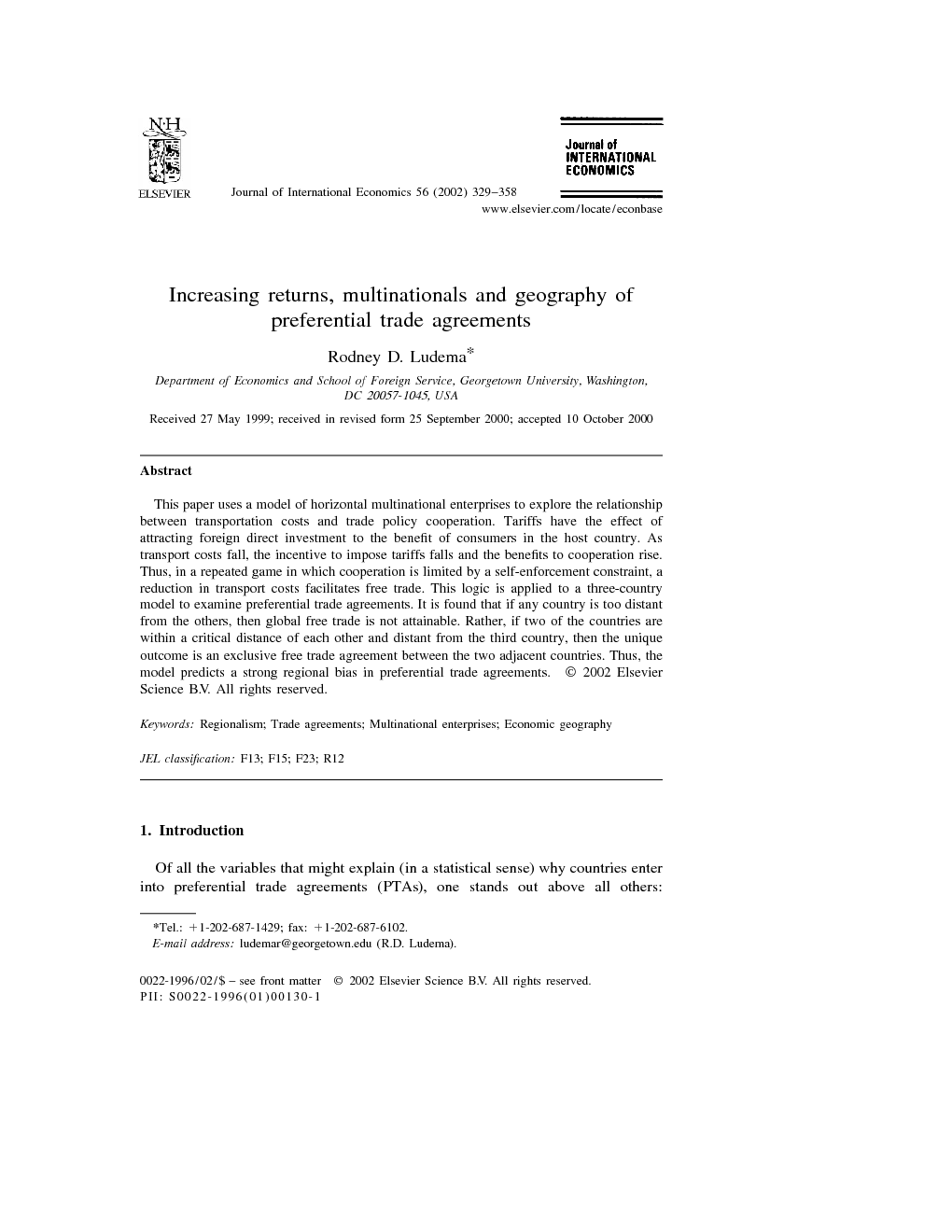 This paper uses a model of horizontal multinational enterprises to explore the relationship between transportation costs and trade policy cooperation. Tariffs have the effect of attracting foreign direct investment to the benefit of consumers in the host country. As transport costs fall, the incentive to impose tariffs falls and the benefits to cooperation rise. Thus, in a repeated game in which cooperation is limited by a self-enforcement constraint, a reduction in transport costs facilitates free trade. This logic is applied to a three-country model to examine preferential trade agreements. It is found that if any country is too distant from the others, then global free trade is not attainable. Rather, if two of the countries are within a critical distance of each other and distant from the third country, then the unique outcome is an exclusive free trade agreement between the two adjacent countries. Thus, the model predicts a strong regional bias in preferential trade agreements.

Of all the variables that might explain (in a statistical sense) why countries enter into preferential trade agreements (PTAs), one stands out above all others: proximity. Virtually all PTAs are between geographically contiguous countries. Those that are not tend to be based on former imperial relationships, which have been diminishing in importance.1 Indeed, so strong is the relationship between proximity and PTAs that few economists even bother to make a distinction between preferential trade and ‘regionalism’.2 Despite this obvious link, however, the theory of PTAs has not produced a compelling argument for why it exists. This paper suggests an approach to this issue and constructs a simple example, based on the theory of multinational enterprises (MNEs), to illustrate its potential.3 The approach taken in this paper will be summarized briefly at this point, postponing the details until the next subsections. There is a certain class of international trade models, involving elements of increasing returns and imperfect competition, in which transportation costs (which are closely correlated with distance) provide an argument for trade policy. Perhaps the most transparent model in this class is that of a MNE that faces a trade-off between proximity and concentration.4 By restricting trade, an importing country can induce the MNE to substitute local production for exports, and this may benefit the country’s consumers through lower prices. The desirability of a trade restriction for the importing country, therefore, may increase with the transport cost. A branch of recent literature has sought to explain the nature of trade agreements by appealing to limitations placed on international cooperation by the absence of outside enforcement (e.g., Bagwell and Staiger, 1990; see Staiger, 1995, for a literature review). Without a supra-national enforcer, countries must design their trade agreements to be ‘self-enforcing.’ In a repeated game framework, this requires that at every point in time a country’s one-time incentive to deviate from an agreement be less than the discounted benefit of future cooperation. Using the simple MNE model described above, this paper shows that the one-time incentive to deviate is lower and the benefit to cooperation greater the lower is the transport cost. Thus, countries separated by low transport costs are more likely to be capable of maintaining a free trade agreement than countries separated by high transport costs. 1.1. An argument from standard preferential trade theory One of the earliest lessons from the standard theory of PTAs (Viner, 1950) is that a PTA is more likely to increase the welfare of its members if it includes the lowest cost suppliers of the goods being traded, as this eliminates the possibility of trade diversion. The cost of transporting goods across distance (as distinct from government-imposed tariffs) is one component of the cost of delivering a product to a foreign market. Other things equal, contiguous countries will be able to deliver goods to each other at lower cost than countries distant from one another. By the same token, a PTA between contiguous countries should be more likely to raise the welfare of its members than a PTA between distant countries. Krugman (1991a) offers an extreme example. Imagine that transportation costs are zero between countries on the same continent and prohibitive to trade between countries on different continents, even without tariffs. It follows that an inter-continental PTA would offer no benefits at all, while an intra-continental PTA would liberalize all trade that can be liberalized and thus certainly raise the welfare of the continent as a whole. The continent in this example is said to be a ‘natural’ trading bloc. Although there is some question as to whether the notion of a natural trading bloc generalizes beyond simple examples (see Frankel et al., 1997), the basic idea appears sensible. However, to make use of it as an explanation for the observed regional bias in PTAs,5 one must make the additional assumption that governments actually enter into those trade agreements that give the highest welfare. While this may not be an objectionable assumption per se, it is a treacherous one in this context. If the policy environment in which trade agreements are created were so benign as to enable countries to achieve maximal welfare, then why would not countries simply agree to global free trade and not bother with PTAs? A credible theory must account for the imperfections in domestic or international institutions that give rise to PTAs in the first place. 1.2. A counter-argument based on repeated game theory While there are several approaches to modeling the institutional imperfections that give rise to trade policy, the most successful approach in analyzing the character of trade agreements has been that based on the theory of repeated games. In such a model, the limits of cooperation are determined by the balance of the one-time incentive for a country to deviate from an agreement with the discounted benefit of future cooperation (avoiding trade war). Virtually the only argument in standard trade theory for not unilaterally eliminating all tariffs is the one based on monopoly power in trade. 6 The relationship between transport costs and monopoly power is generally ambiguous, but in most cases we would expect it to be negative. In Krugman’s example, there is no incentive for a country of any size to unilaterally impose a tariff on inter-continental trade, whereas a large country can expect to benefit from a small tariff on intra-continental trade through improved terms of trade. In other words, while there are greater benefits to intra-continental cooperation, there is a greater incentive to deviate as well. Thus, it certainly cannot be supposed that contiguous countries will be able to agree upon lower tariffs than distant ones, as long as we remain in a conventional constant returns-perfect competition framework. 7

The strong empirical relationship that seems to exist between proximity and preferential trade is an issue worthy of the attention of economists interested in economic geography and commercial policy. It is not easily explained using standard trade theory, even when account is taken of trade agreement imperfections due to limited enforceability. This paper uses a simple model of horizontal MNEs, which when combined limited enforceability, produces a strong inverse relationship between physical transport costs and trade policy cooperation. In the three-country model, this produces a regional bias in PTAs. This paper has highlighted the possible role of horizontal MNEs. However, it may be that multinational activity alone is too small in relation to total trade flows to account for the geography of PTAs. Thus, it would be useful to extend the analysis to other models of trade that exhibit the home market effect. Some progress has been made using the models of Venables (1985, 1987). Though the analytics of these cases are rather untidy, numerical simulations have produced results similar to those presented here. The simple MNE model used in this paper has the counterfactual implication that trade and FDI are perfect substitutes. It is well known, however, countries with large bilateral FDI flows also tend to have large bilateral trade flows. While the literature MNEs has not completely settled on an explanation for this, it is clear that to account for it there must be ‘mixed’ equilibria, in which both single-plant and multi-plant firms operate simultaneously. This possibility arises in most of leading, though more complicated, MNE models. Thus, our results should be reconsidered using a model such as Horstmann and Markusen (1992). Another worthwhile next step in this research would be to increase the number of countries. Our results seem to suggest that trade blocs may come in clusters, and there may be a maximum geographic size of an bloc. It is likely that this maximum size would grow as the transport cost falls. Despite its limitations, this paper is a step toward understanding the geography of trade agreements. The model features transport costs, economies of scale, and imperfect competition — the same recipe that has proven successful in the economic geography literature in explaining a wide variety of geographic phenomena. It also uses the repeated games approach which has been used extensively in the commercial policy literature to explain aspects of international trade agreements. This paper shows the potential of linking these two traditions for modeling the geography of trade agreements.