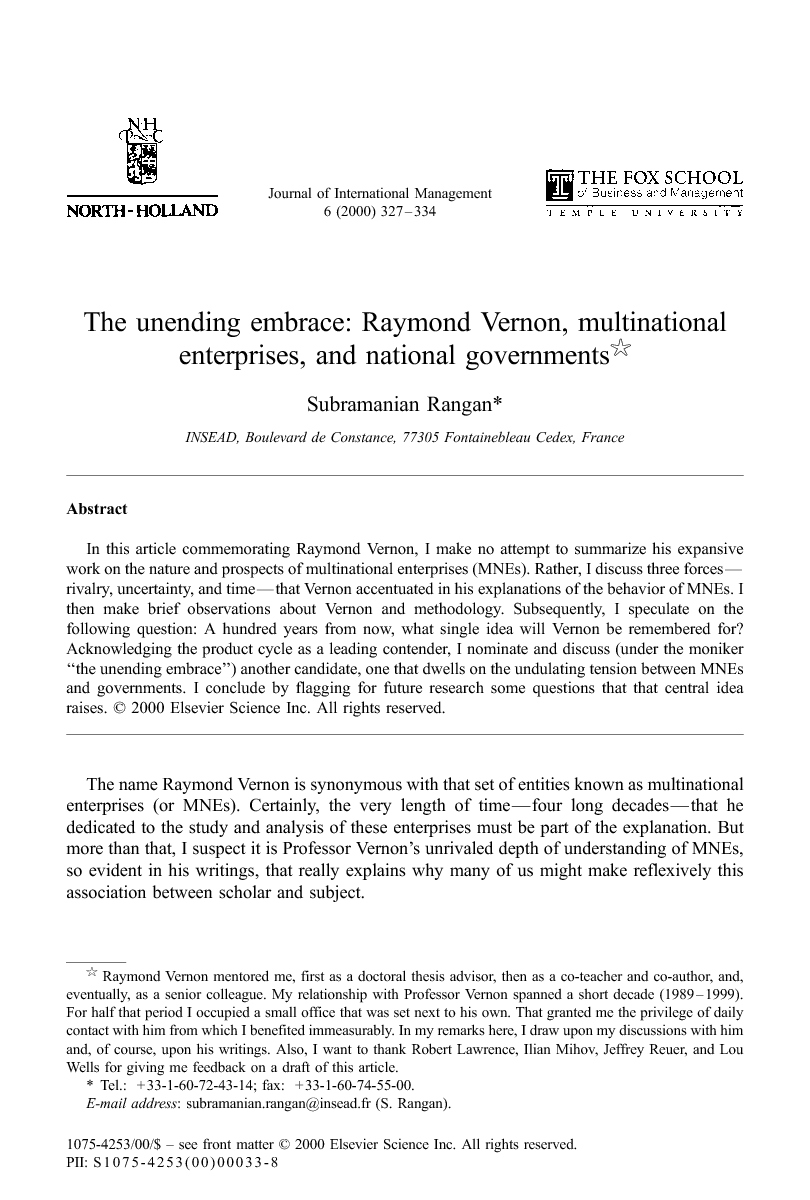 The challenge emphasized by Vernon raises several questions for research. For instance, going forward, how might MNEs allocate their operations across nations? Beyond other factors (such as transport costs, scale economies, and exchange rates), how might MNEs take the “unending embrace” into account in their location decisions? Should each MNE, even at the cost of foregoing some current efficiency, spread its operations across its major markets, and lessen (or spread) the burden of adjustment on any given locality? That is should each MNE build a “structural hedge” of sorts that keep it in ready compliance with potential local content regulations? (Think of Japanese transplants in the United States and their voluntary export restraints.) Or can MNEs assume that through a process of regional specialization, different industries will end up concentrated in different parts of the world and that eventually the adjustment problem will be worked out at the industry rather than the firm level? Put differently, in an uncertain world where the extent of the market is likely to be a political resultant, how should MNEs place their bets? Does it make sense to pursue a mixed strategy (such as the distributed specialization advocated in recent multinational management texts)? Given that tradeoffs between efficiency and sustainability are implied, the question is how might firms act to minimize such tradeoffs? On the public policy side, a question is whether regional blocs can represent a partial response to the above challenge. In other words, even if regional blocs do not bring “first-best” maximum efficiency, can they be an equilibrium arrangement that can mitigate adequately the above tensions? Thus, should governments now not push too aggressively for arrangements such as a TAFTA (Trans-Atlantic Free Trade Area)? Should further rounds of the WTO (the World Trade Organization) be put on the back burner pending a settling down and adjustment period? Should talk of a return to a worldwide fixed exchange rate regime (potentially beneficial to business) be set aside along similar grounds? More broadly, in spheres of commerce, to what extent, when, and where (beyond classic government-remediable market failures) must economics make room for politics? Having brought to our attention a challenge central to future economic well being, Ray Vernon leaves to us the responsibility of coming up with better answers. Fortunately, his academic career-long efforts at analyzing and explaining the nature of MNEs and their interactions with governments provide us an extraordinarily solid foundation upon which to build. I suggest we take that research forward bearing in mind that if we are to avoid the pessimism of Marx and work toward the optimism of Smith, we might have to pay more heed to the realism of Vernon.