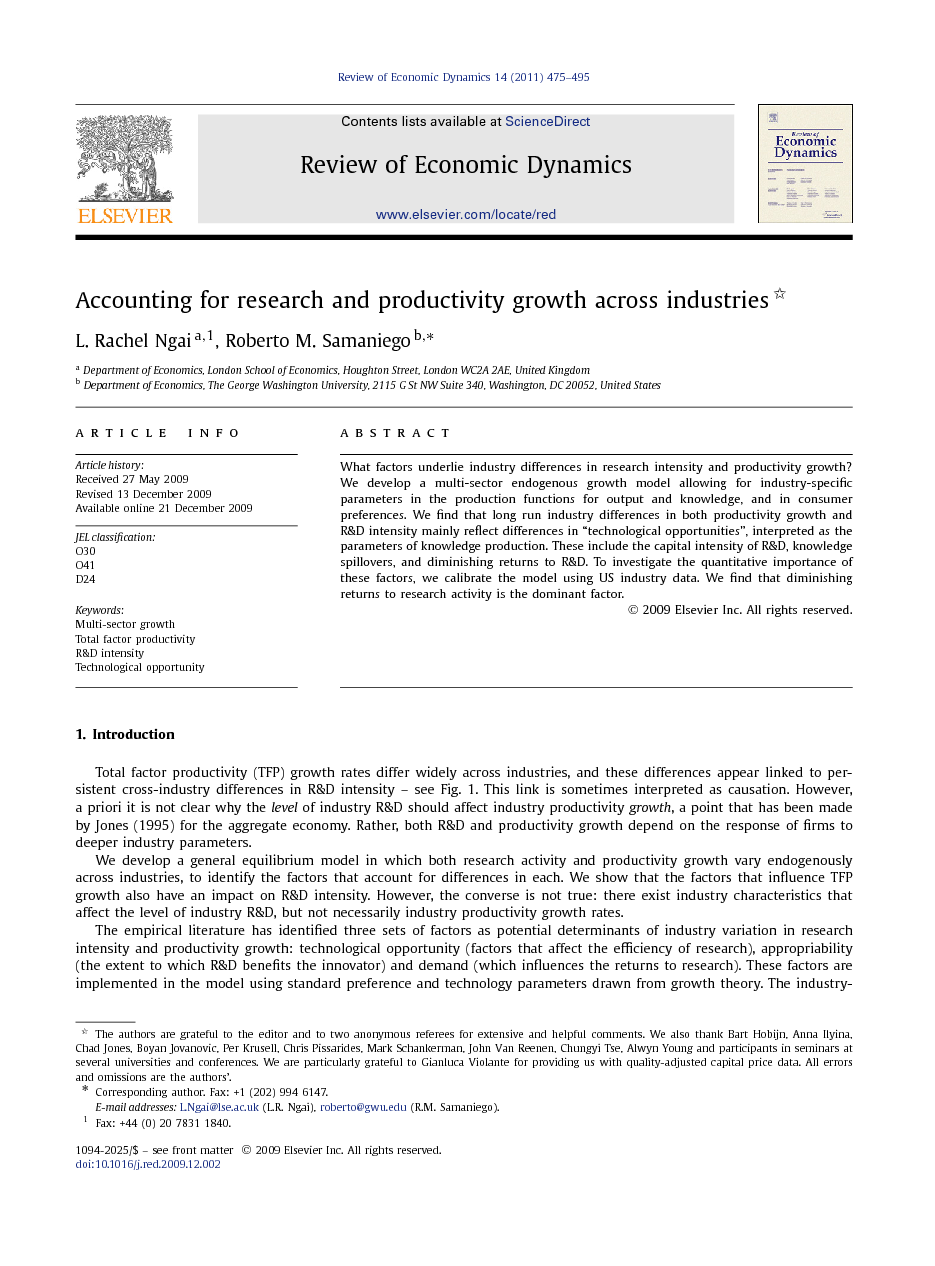 What factors underlie industry differences in research intensity and productivity growth? We develop a multi-sector endogenous growth model allowing for industry-specific parameters in the production functions for output and knowledge, and in consumer preferences. We find that long run industry differences in both productivity growth and R&D intensity mainly reflect differences in “technological opportunities”, interpreted as the parameters of knowledge production. These include the capital intensity of R&D, knowledge spillovers, and diminishing returns to R&D. To investigate the quantitative importance of these factors, we calibrate the model using US industry data. We find that diminishing returns to research activity is the dominant factor.

Total factor productivity (TFP) growth rates differ widely across industries, and these differences appear linked to persistent cross-industry differences in R&D intensity – see Fig. 1. This link is sometimes interpreted as causation. However,a priori it is not clear why the level of industry R&D should affect industry productivity growth, a point that has been madeby Jones (1995) for the aggregate economy. Rather, both R&D and productivity growth depend on the response of firms to deeper industry parameters. We develop a general equilibrium model in which both research activity and productivity growth vary endogenously across industries, to identify the factors that account for differences in each. We show that the factors that influence TFP growth also have an impact on R&D intensity. However, the converse is not true: there exist industry characteristics that affect the level of industry R&D, but not necessarily industry productivity growth rates. The empirical literature has identified three sets of factors as potential determinants of industry variation in research intensity and productivity growth: technological opportunity (factors that affect the efficiency of research), appropriability(the extent to which R&D benefits the innovator) and demand (which influences the returns to research). These factors are implemented in the model using standard preference and technology parameters drawn from growth theory. The industry-specific factors we study are: diminishing returns to research, knowledge spillovers over time, knowledge spillovers across firms, capital intensity in the production of goods, capital intensity in the production of ideas, the elasticity of substitution across different varieties of goods within each industry, and the industry’s market size. As our interest is in industry comparisons, we focus on equilibria where the distribution of productivity within sectors is stable and rank preserving. We find that differences in industry TFP growth rates depend only on factors of technological opportunity. These include the extent to which research is subject to diminishing returns, the capital share of research spending, and total knowledge spillovers. By contrast, differences in R&D intensity also depend on the extent to which knowledge spillovers accrue from the firm’s own stock of knowledge, which we interpret as a measure of appropriability.2 Product demand is fundamental in providing incentives to perform research: nevertheless, we find that industry differences in equilibrium TFP growth rates and R&D intensity do not depend on demand parameters that are constant over time.3 To narrow down which factors of technological opportunity best account for cross-industry comparisons in a productionfunction based framework, we calibrate the model using US industry data. We find that the capital intensity of research cannot account for observed industry differences in productivity growth rates. Furthermore, we find that variation in appropriability has little impact on industry variation in R&D intensity. Thus, the model indicates that variation in diminishing returns to research and in the magnitude of spillovers must jointly account for patterns of productivity growth and research activity. Finally, for each industry we select these two parameters so that the equilibrium productivity growth rate and R&D intensity level in the model match the values in the data exactly. We find that the degree of diminishing returns to R&D is the main factor behind industry variation in productivity growth rates and in R&D intensity.In related work, Klenow (1996) studies the determinants of cross-industry differences in TFP growth and R&D intensity in a 2-sector version of the Romer (1990) model. Krusell (1998) develops a 2-sector framework to endogenize the decline in the price of capital relative to consumption goods documented by Greenwood, Hercowitz and Krusell (1997), and Vourvachaki (2007) develops a two-sector endogenous growth model to endogenize technical progress in IT: however, in these papers, there is only research in one sector, and the focus is not on the factors that determine industry TFP growth rates. In the partial equilibrium model of Nelson (1988), the extent to which knowledge spills from a firm to its competitors affects R&D intensity but not TFP growth rates, and our general equilibrium environment also yields this result. Klevorick et al. (1995) and Nelson and Wolff (1997) provide evidence supporting this claim. Section 2 provides an overview of the related literature. We do this to line up the factors we wish to embody later in our model. Section 3 describes the structure of the model and outlines the main results, and Section 4 studies its long run behavior. Section 5 uses a calibration of the model to determine the relative importance of different potential determinants of research and productivity differences. Section 6 discusses possible extensions.

We develop a multi-sector, general equilibrium model of endogenous growth, incorporating a number of factors identified in the literature as potential determinants of the costs and benefits of research. We find that the main determinant of productivity growth differences across sectors are the technological opportunity parameters, especially the extent of decreasing returns to research activity. Although this parameter has not been identified as a potentially important source of cross-industry differences in the related literature, it turns out to play a pivotal role in a growth model that is consistent with stable growth over the long run. Theoretically, we find that two more factors of opportunity may be important – the extent to which new knowledge “stands on the shoulders” of prior knowledge, and the capital share of research activity –although quantitatively they do not appear to play an important role.The fraction of total spillovers that accrues from the firm’s own stock of knowledge affects cross-industry differences in research intensity but not TFP growth, whereas differences in demand factors affect neither, in line with a sense in the technology literature that technical change is primarily supply-driven. Nelson and Winter (1977) argue that innovations follow “natural trajectories” that have a technological or scientific rationale rather than being driven by movements in demand and, similarly, Rosenberg (1969) writes of innovation following a “compulsive sequence”. In our model, equilibrium differences in long run productivity growth rates depend on opportunity parameters, so that long-run TFP growth rates are determined by technological factors: “natural trajectories” are an equilibrium outcome.We see several directions for future work. It would be interesting to provide microfoundations for different factors of opportunity and appropriability. For example, could the magnitude of knowledge spillovers or the extent to which they accrue to different agents depend on the institutions that govern research, or even on organizational structure? Also, we have not used our model to explore policy implications. However, our results suggest that a “one-size fits all” R&D subsidy may not be an optimal policy when technological opportunities vary significantly across industries. We leave this topic for future work.