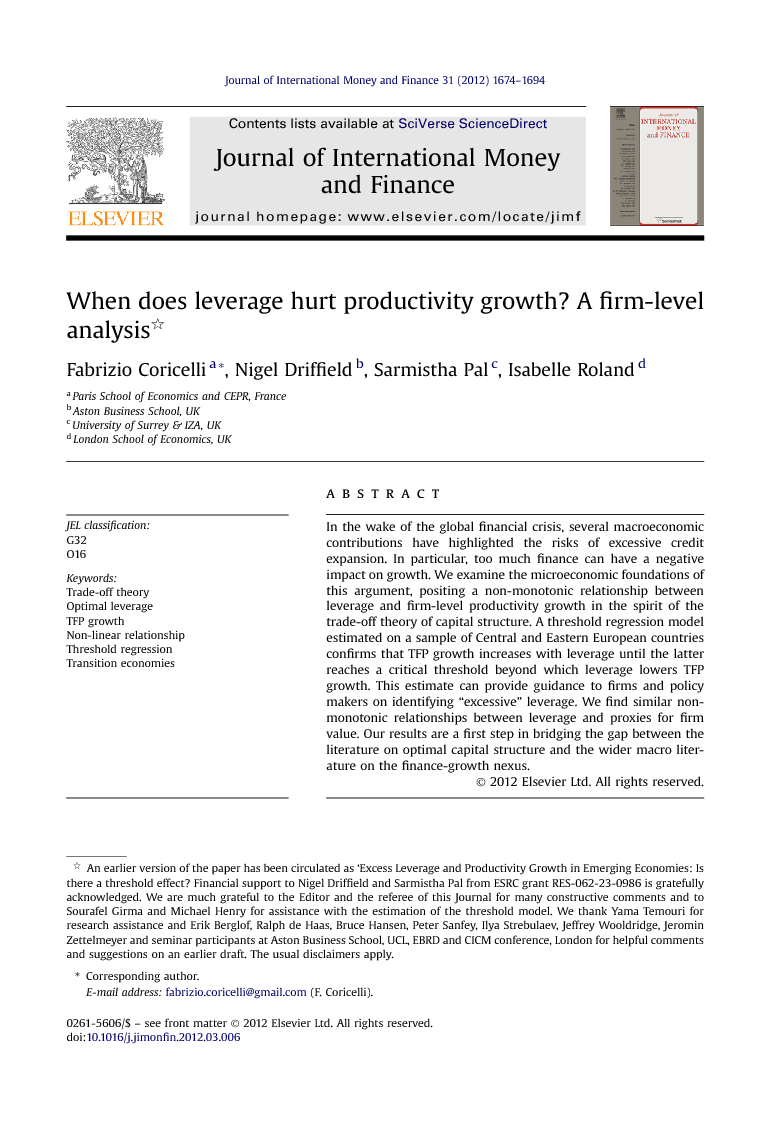 In the wake of the global financial crisis, several macroeconomic contributions have highlighted the risks of excessive credit expansion. In particular, too much finance can have a negative impact on growth. We examine the microeconomic foundations of this argument, positing a non-monotonic relationship between leverage and firm-level productivity growth in the spirit of the trade-off theory of capital structure. A threshold regression model estimated on a sample of Central and Eastern European countries confirms that TFP growth increases with leverage until the latter reaches a critical threshold beyond which leverage lowers TFP growth. This estimate can provide guidance to firms and policy makers on identifying “excessive” leverage. We find similar non-monotonic relationships between leverage and proxies for firm value. Our results are a first step in bridging the gap between the literature on optimal capital structure and the wider macro literature on the finance-growth nexus.

The paper aims to bridge the gap between the literature on optimal capital structure and the wider macroeconomic literature on finance-growth nexus. On the basis of the trade-off theory of capital structure, we posit a non-monotonic relationship between leverage and productivity growth at the firm level. TFP growth is not only the most important metric in the macroeconomic growth literature; it has attracted increasing interest from the finance literature. We provide evidence supporting our hypothesis of non-monotonicity, using a threshold regression model (Hansen, 2000). Estimates for a sample of Central and Eastern European countries confirm that TFP growth increases with book leverage until the latter reaches a critical threshold beyond which leverage becomes “excessive” and lowers TFP growth. This result points to the existence of an optimal leverage ratio where the net benefits of debt in terms of productivity gains are exhausted. Despite some variation depending on the sample and the measure of leverage, the estimates seem quite robust. The estimates of the slope coefficients for the three bands of leverage (low, intermediate and excessive) suggest that the productivity gains (costs) to leverage are substantial for underlevered (overlevered) firms. Leverage is found to have similar non-monotonic effects on return on assets and return on equity. Due to data limitations, our results are not a formal test of the trade-off theory. However, they suggest that the threshold regression approach is a promising methodology for the study of optimal capital structure and how the latter varies with firm characteristics. In contrast to existing empirical evidence based on observed leverage ratios, the threshold model allows us to endogenously determine optimal leverage despite firms' temporary deviations from the optimum. Our results suggest a positive (negative) relationship between profitability (size) and optimal leverage, unlike existing studies that use traditional cross-sectional or panel regressions. Using the leverage threshold estimates, we find evidence of a significant proportion of firms with debt ratios in excess of the upper debt threshold in our sample. Our results suggest that the proportion of firms with excessive leverage is higher among relatively less profitable firms in most sample countries, a result that extends beyond the transition sample, as shown by the study by Korteweg (2010) on the US. Finally, our results are robust to different specifications, such as instrumental variables, and to different sample periods.