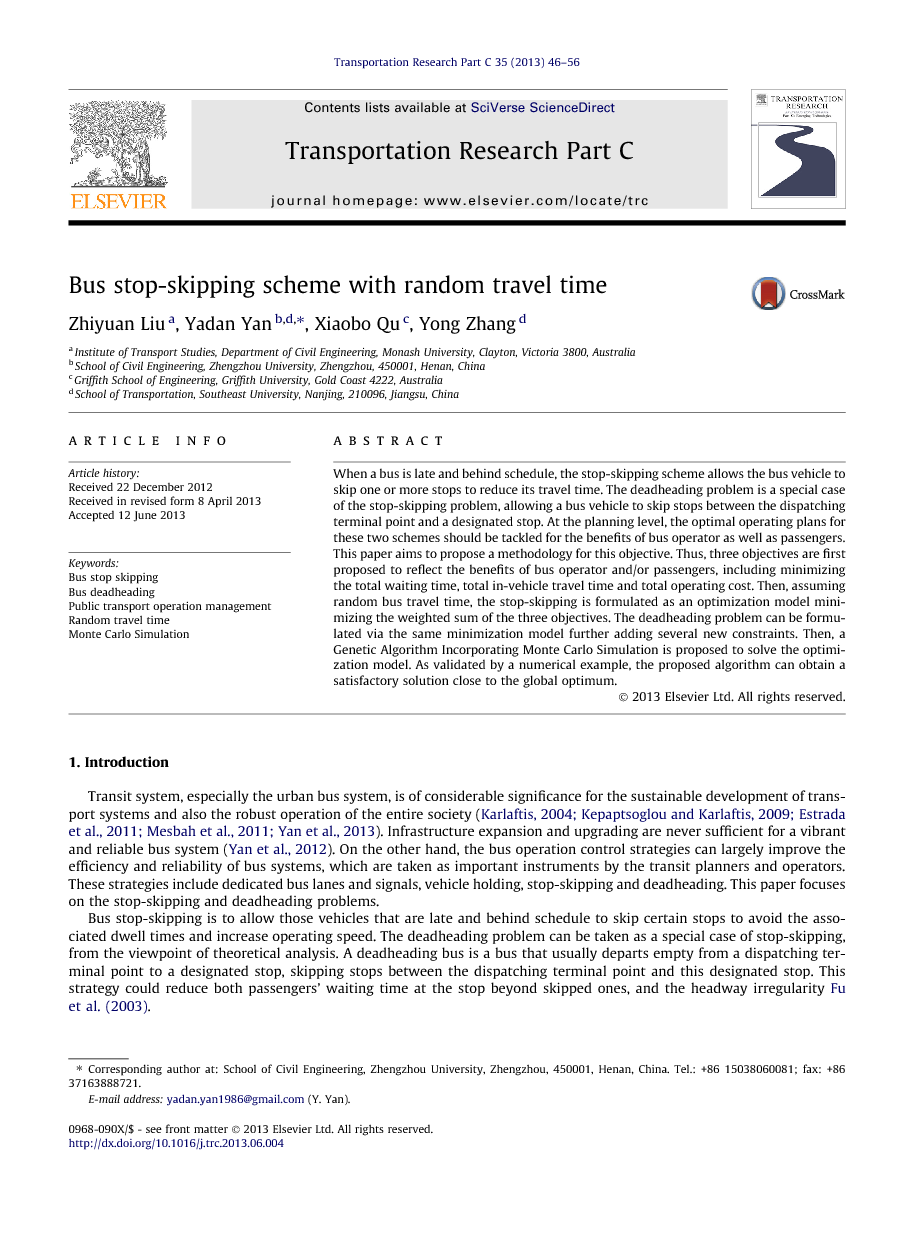 When a bus is late and behind schedule, the stop-skipping scheme allows the bus vehicle to skip one or more stops to reduce its travel time. The deadheading problem is a special case of the stop-skipping problem, allowing a bus vehicle to skip stops between the dispatching terminal point and a designated stop. At the planning level, the optimal operating plans for these two schemes should be tackled for the benefits of bus operator as well as passengers. This paper aims to propose a methodology for this objective. Thus, three objectives are first proposed to reflect the benefits of bus operator and/or passengers, including minimizing the total waiting time, total in-vehicle travel time and total operating cost. Then, assuming random bus travel time, the stop-skipping is formulated as an optimization model minimizing the weighted sum of the three objectives. The deadheading problem can be formulated via the same minimization model further adding several new constraints. Then, a Genetic Algorithm Incorporating Monte Carlo Simulation is proposed to solve the optimization model. As validated by a numerical example, the proposed algorithm can obtain a satisfactory solution close to the global optimum.

Transit system, especially the urban bus system, is of considerable significance for the sustainable development of transport systems and also the robust operation of the entire society (Karlaftis, 2004, Kepaptsoglou and Karlaftis, 2009, Estrada et al., 2011, Mesbah et al., 2011 and Yan et al., 2013). Infrastructure expansion and upgrading are never sufficient for a vibrant and reliable bus system (Yan et al., 2012). On the other hand, the bus operation control strategies can largely improve the efficiency and reliability of bus systems, which are taken as important instruments by the transit planners and operators. These strategies include dedicated bus lanes and signals, vehicle holding, stop-skipping and deadheading. This paper focuses on the stop-skipping and deadheading problems. Bus stop-skipping is to allow those vehicles that are late and behind schedule to skip certain stops to avoid the associated dwell times and increase operating speed. The deadheading problem can be taken as a special case of stop-skipping, from the viewpoint of theoretical analysis. A deadheading bus is a bus that usually departs empty from a dispatching terminal point to a designated stop, skipping stops between the dispatching terminal point and this designated stop. This strategy could reduce both passengers’ waiting time at the stop beyond skipped ones, and the headway irregularity Fu et al. (2003). The bus stop-skipping scheme can be analyzed both at the planning level and at real-time operation level (Sun, 2005). It may largely influence those passengers with either their origin or destination stop skipped, in view that they have to wait for at least one more headway to be served. Moreover, the stop-skipping of one bus would also affect the total trip time of other buses, hence influencing the operating cost of the bus company. Many previous studies on bus stop-skipping only concern reducing the waiting time of passengers at the bus stops, without considering the passengers’ in-vehicle travel time and the bus company’s operating cost. Thus, a systematic analysis is necessary for the stop-skipping problem considering its effects on each type of stakeholders, which is addressed in this paper. To better describe the practical circumstances of bus operation, the travel time of each bus between two stops is rationally assumed to be a random variable. This assumption, however, has increased the challenge of analyzing, formulating and solving the addressed stop-skipping problem.