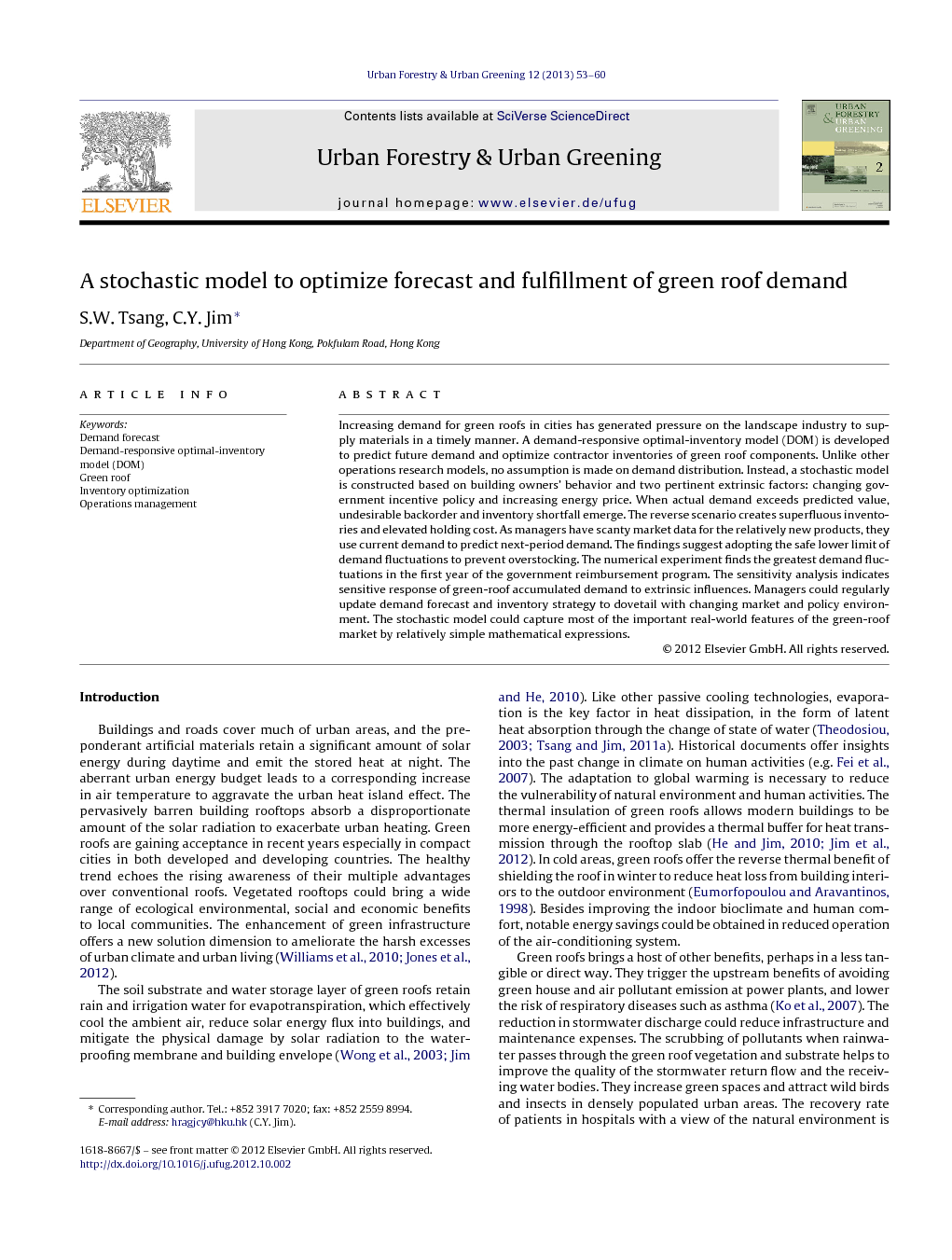 Increasing demand for green roofs in cities has generated pressure on the landscape industry to supply materials in a timely manner. A demand-responsive optimal-inventory model (DOM) is developed to predict future demand and optimize contractor inventories of green roof components. Unlike other operations research models, no assumption is made on demand distribution. Instead, a stochastic model is constructed based on building owners’ behavior and two pertinent extrinsic factors: changing government incentive policy and increasing energy price. When actual demand exceeds predicted value, undesirable backorder and inventory shortfall emerge. The reverse scenario creates superfluous inventories and elevated holding cost. As managers have scanty market data for the relatively new products, they use current demand to predict next-period demand. The findings suggest adopting the safe lower limit of demand fluctuations to prevent overstocking. The numerical experiment finds the greatest demand fluctuations in the first year of the government reimbursement program. The sensitivity analysis indicates sensitive response of green-roof accumulated demand to extrinsic influences. Managers could regularly update demand forecast and inventory strategy to dovetail with changing market and policy environment. The stochastic model could capture most of the important real-world features of the green-roof market by relatively simple mathematical expressions.

Buildings and roads cover much of urban areas, and the preponderant artificial materials retain a significant amount of solar energy during daytime and emit the stored heat at night. The aberrant urban energy budget leads to a corresponding increase in air temperature to aggravate the urban heat island effect. The pervasively barren building rooftops absorb a disproportionate amount of the solar radiation to exacerbate urban heating. Green roofs are gaining acceptance in recent years especially in compact cities in both developed and developing countries. The healthy trend echoes the rising awareness of their multiple advantages over conventional roofs. Vegetated rooftops could bring a wide range of ecological environmental, social and economic benefits to local communities. The enhancement of green infrastructure offers a new solution dimension to ameliorate the harsh excesses of urban climate and urban living (Williams et al., 2010 and Jones et al., 2012). The soil substrate and water storage layer of green roofs retain rain and irrigation water for evapotranspiration, which effectively cool the ambient air, reduce solar energy flux into buildings, and mitigate the physical damage by solar radiation to the waterproofing membrane and building envelope (Wong et al., 2003 and Jim and He, 2010). Like other passive cooling technologies, evaporation is the key factor in heat dissipation, in the form of latent heat absorption through the change of state of water (Theodosiou, 2003 and Tsang and Jim, 2011a). Historical documents offer insights into the past change in climate on human activities (e.g. Fei et al., 2007). The adaptation to global warming is necessary to reduce the vulnerability of natural environment and human activities. The thermal insulation of green roofs allows modern buildings to be more energy-efficient and provides a thermal buffer for heat transmission through the rooftop slab (He and Jim, 2010 and Jim et al., 2012). In cold areas, green roofs offer the reverse thermal benefit of shielding the roof in winter to reduce heat loss from building interiors to the outdoor environment (Eumorfopoulou and Aravantinos, 1998). Besides improving the indoor bioclimate and human comfort, notable energy savings could be obtained in reduced operation of the air-conditioning system. Green roofs brings a host of other benefits, perhaps in a less tangible or direct way. They trigger the upstream benefits of avoiding green house and air pollutant emission at power plants, and lower the risk of respiratory diseases such as asthma (Ko et al., 2007). The reduction in stormwater discharge could reduce infrastructure and maintenance expenses. The scrubbing of pollutants when rainwater passes through the green roof vegetation and substrate helps to improve the quality of the stormwater return flow and the receiving water bodies. They increase green spaces and attract wild birds and insects in densely populated urban areas. The recovery rate of patients in hospitals with a view of the natural environment is faster than those who only have a view of adjacent buildings (Ulrich, 1984 and Straits Times, 2001). In terms of cost-benefit, green roofs far outweigh the conventional roofs. The lifespan of typical green roof systems averages at 40 years (Carter and Keeler, 2008). The savings in electricity tariff for air-conditioning and refurbishment of roof waterproofing membrane are more than adequate to cover the installation and maintenance costs of green roofs. Renovation of the roof waterproofing has to be conducted for conventional rooftops every twenty years (Wong et al., 2003). Greening can extend the lifespan of the waterproofing membrane. The recent rather precipitous rise in energy price has induced the invention and adoption of energy-efficient techniques in building design. Empirical evidence shows that green roof could lower up to 75% of energy consumption for air-conditioning (Liu, 2003). The rooftop garden remains scarce in most cities despite the growing concerns about climate change and energy price hike (Tian and Jim, 2012). Most building owners have misconceptions about the installation and maintenance costs, and environmental and economic benefits. Besides, they tend to harbor misconception about the negative aspects such as increasing the likelihood of roof leaking and attracting mosquitoes and other pests. The government could introduce an incentive scheme to encourage building owners to green their rooftop so that residents and workers can share the associated multiple economic and environmental benefits (Carter and Fowler, 2008 and Tsang and Jim, 2011b). As a result, the demand for roof greening components could be boosted, particularly at the early stage of the scheme. The challenges of a fast expanding market and rising expectation call for apt and timely adjustments in the demand and supply sides of the industry (Li et al., 2009). Various econometric and computation models have been employed to study the supply and demand problems in environmental and ecological issues (Fiala, 2008 and Vona and Patriarca, 2011). Green roof contractors often face difficulties in finding an optimal match between market demand and the appropriate inventories for green roof components. In running the business, the managers have to develop strategies to improve productivity and efficiency. They shoulder the onuses of preparing budgets, controlling inventories, enhancing logistics, and responding promptly to changes in market and policy factors. Among the various externalities, the uncertainties in government environmental policy and energy price could notably mold the demand for green roof components. An optimal inventory level plays key roles in avoiding business loss to rival competitors, quality and timeliness in delivery of services, customer satisfaction, and company reputation. This paper examines the optimal inventory level by modeling roof greening demands under different market scenarios. Green roof practitioners and managers may find the findings useful for their operations. The remainder of this paper is organized in sequence. The typical green roof system and components are explained. The stochastic approach is employed to model the demand of green roofs and the associated optimal inventory level. Like other green roof researchers (e.g. Sailor, 2008), numerical experiments and sensitivity analysis are used to demonstrate model characteristics. The last section concludes the study.