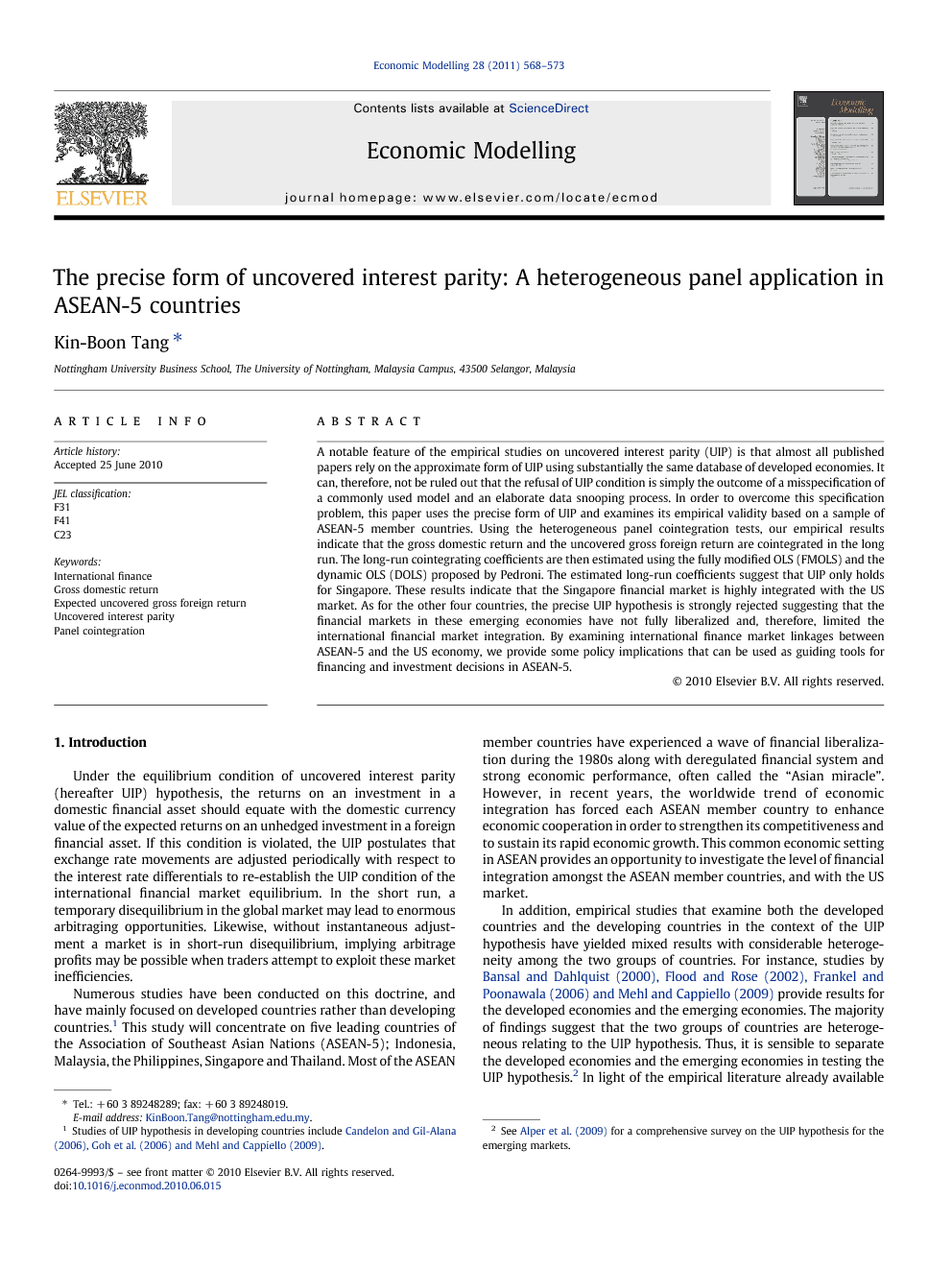 A notable feature of the empirical studies on uncovered interest parity (UIP) is that almost all published papers rely on the approximate form of UIP using substantially the same database of developed economies. It can, therefore, not be ruled out that the refusal of UIP condition is simply the outcome of a misspecification of a commonly used model and an elaborate data snooping process. In order to overcome this specification problem, this paper uses the precise form of UIP and examines its empirical validity based on a sample of ASEAN-5 member countries. Using the heterogeneous panel cointegration tests, our empirical results indicate that the gross domestic return and the uncovered gross foreign return are cointegrated in the long run. The long-run cointegrating coefficients are then estimated using the fully modified OLS (FMOLS) and the dynamic OLS (DOLS) proposed by Pedroni. The estimated long-run coefficients suggest that UIP only holds for Singapore. These results indicate that the Singapore financial market is highly integrated with the US market. As for the other four countries, the precise UIP hypothesis is strongly rejected suggesting that the financial markets in these emerging economies have not fully liberalized and, therefore, limited the international financial market integration. By examining international finance market linkages between ASEAN-5 and the US economy, we provide some policy implications that can be used as guiding tools for financing and investment decisions in ASEAN-5.

This paper has examined the empirical validity of uncovered interest parity for fi ve ASEAN member countries as a long-run equilibrium condition UIP speci fi ed in precise form rather than the conventional approximate speci fi cation. The results obtained from panel approaches strongly reject the precise form of UIP hypothesis for Indonesia, Malaysia, the Philippines and Thailand. The rejection of UIP in this instance suggests that the fi nancial markets in these emerging economies are not fully integrated with the US economy. These fi ndings also point to the potential importance of market inef fi ciency for the rejection of UIP. Using the same panel techniques,the success of UIP condition between Singapore and US appears to be an important fi nding in this paper – suggesting that the Singaporean fi nancial market is more integrated with the US market. The long- standing and strong economic relations between the two countries are likely to have contributed to this result. This paper also provides some empirical support for the debate that Singapore has well- developed and liberalized fi nancial institutions with very few restrictions on the capital fl ows between Singapore and the United States suggesting that the two countries' fi nancial markets are well integrated. Nevertheless, our results are subject to structural changes as the sample covers periods of extensive capital controls and fi xed exchange rates system in the region, particularly during the Asian crisis in 1997/1998. This issue deserves further investigation with particular emphasis on the structural-break analysis under the different exchange rate regimes involved.