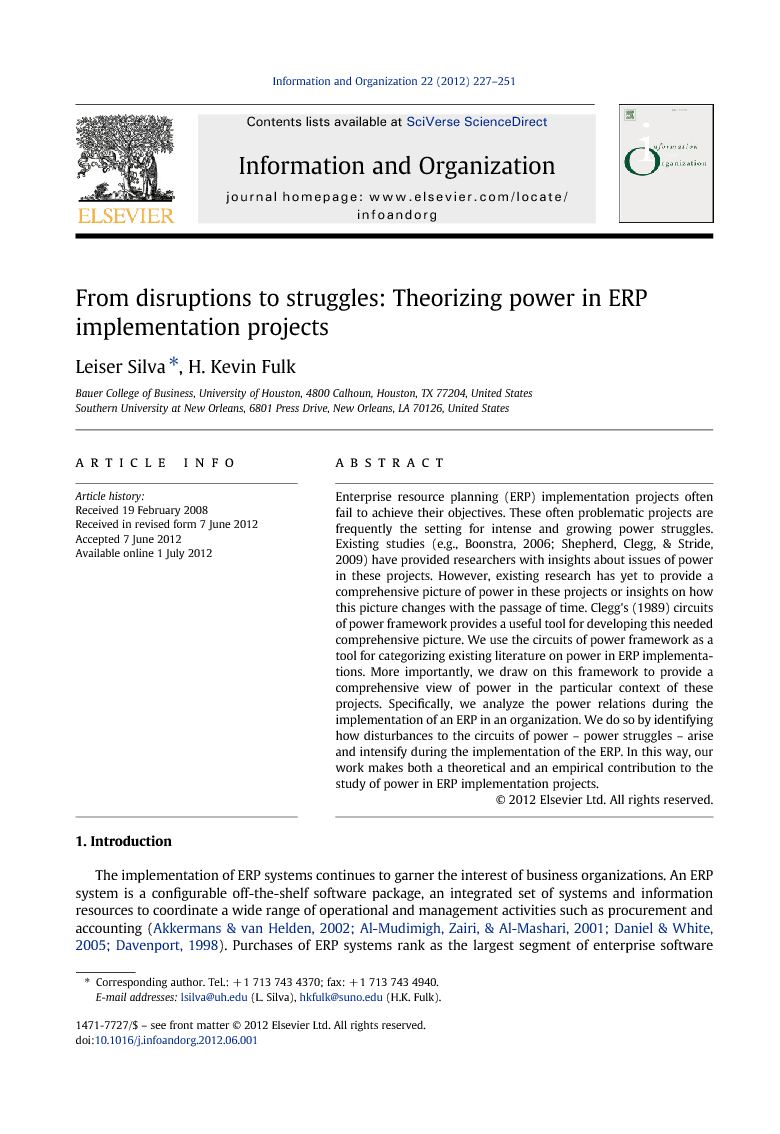 Enterprise resource planning (ERP) implementation projects often fail to achieve their objectives. These often problematic projects are frequently the setting for intense and growing power struggles. Existing studies (e.g., Boonstra, 2006; Shepherd, Clegg, & Stride, 2009) have provided researchers with insights about issues of power in these projects. However, existing research has yet to provide a comprehensive picture of power in these projects or insights on how this picture changes with the passage of time. Clegg's (1989) circuits of power framework provides a useful tool for developing this needed comprehensive picture. We use the circuits of power framework as a tool for categorizing existing literature on power in ERP implementations. More importantly, we draw on this framework to provide a comprehensive view of power in the particular context of these projects. Specifically, we analyze the power relations during the implementation of an ERP in an organization. We do so by identifying how disturbances to the circuits of power – power struggles – arise and intensify during the implementation of the ERP. In this way, our work makes both a theoretical and an empirical contribution to the study of power in ERP implementation projects.

The implementation of ERP systems continues to garner the interest of business organizations. An ERP system is a configurable off-the-shelf software package, an integrated set of systems and information resources to coordinate a wide range of operational and management activities such as procurement and accounting (Akkermans and van Helden, 2002, Al-Mudimigh et al., 2001, Daniel and White, 2005 and Davenport, 1998). Purchases of ERP systems rank as the largest segment of enterprise software spending, which is projected to increase through 2015 (Gartner, Inc., 2011). ERP systems are expected to provide benefits such as reducing development costs and giving real time access to business data (Davenport, 1998, Palomino Murcia and Whitley, 2007 and Seethamraju, 2008). However, ERP implementation projects are often problematic endeavors. Estimates suggest that up to 75% of ERP implementations fail to achieve their intended objectives (Robey, Ross, & Boudreau, 2002). Faced with the often problematic outcomes of ERP implementations, IS researchers have sought to understand reasons for these projects' poor performance. Power struggles, often manifested in conflict and resistance, have been referred to as one of the main reasons why ERP projects fail to achieve their goals (see for example Allen et al., 2002 and Markus et al., 2000). Although, there have been many studies that concentrate on power and ERP implementations (these will be discussed in the literature review section), their scope is narrow as these tend to focus mainly on conflicting actions. However, as it has been demonstrated in sociology (e.g., Clegg, 1989, Giddens, 1984 and Lukes, 1974) and IS literature (see Jasperson, Carte, Saunders, Butler, Croes, & Zheng, 2002), power operates beyond actions and behaviors; it does it also through the creation of meanings and techniques of production. Hence the motivation of our paper; that is identifying what are the antecedents of power struggles. We will argue that these struggles are rooted in rules of meaning and techniques of production. Accordingly, our research objectives are: (1) to empirically demonstrate – through a case study – how power operates through meanings and techniques of production and (2) to theorize on the conditions that engender power struggles.

Our study's findings have implications for both research and practice. As noted previously, our work demonstrates the value of the Circuits of Power framework both as a tool for categorizing and integrating the diverse findings of existing research on power and as a tool for analyzing power issues. Nevertheless, it may be worth reflecting on the limitations of our theoretical lens. One of the main issues is the Circuits of Power focus. The Circuits framework concentrates on explaining integration as a result of power, yet the system we studied did not reach integration. However, although not for explaining integration, the Circuits' conceptual richness helped us in structuring and conceptualizing the case. It was fundamental in identifying the circumstances and context in which power disruptions occurred; which was one of the objectives of our research. Even though it may seem dissonant to apply a theoretical lens that focuses on integration to explain disruptions, it is important to emphasize that we do not deem integration and lack of it as a dichotomy but as a spectrum, with low integration on one extreme and high integration on the other. In order to understand such a continuum we need to acknowledge not only factors that favor integration but also those that hinder it; hence our contribution in theorizing about disruptions. We do not claim, however, that we have made a general contribution to the theory, but a very specific one, which circumscribes itself to ERP implementations. It may be a matter of further research to establish whether the proposed conditions for disruptions hold for other types of systems and in other contexts.