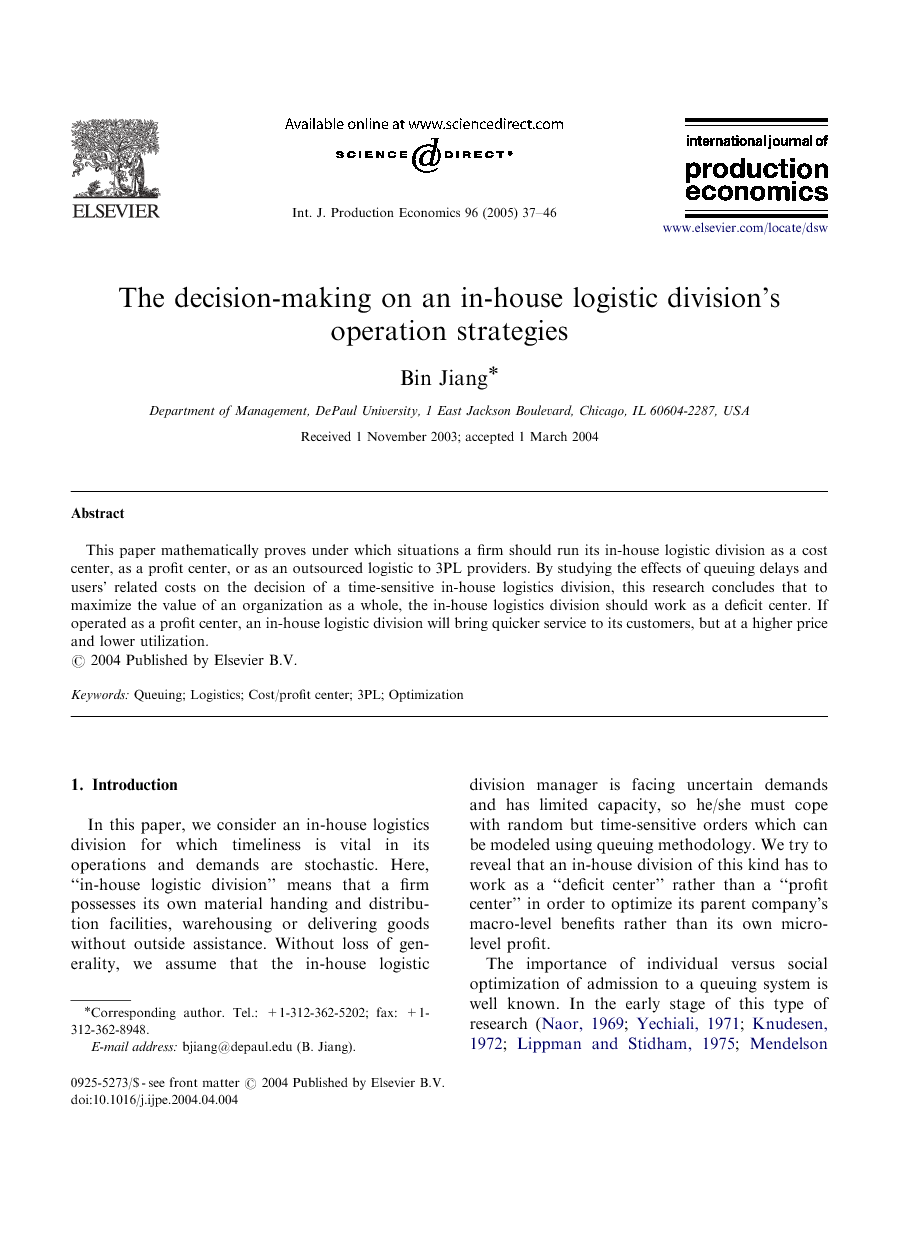 In this paper, we consider an in-house logistics division for which timeliness is vital in its operations and demands are stochastic. Here, “in-house logistic division” means that a firm possesses its own material handing and distribution facilities, warehousing or delivering goods without outside assistance. Without loss of generality, we assume that the in-house logistic division manager is facing uncertain demands and has limited capacity, so he/she must cope with random but time-sensitive orders which can be modeled using queuing methodology. We try to reveal that an in-house division of this kind has to work as a “deficit center” rather than a “profit center” in order to optimize its parent company’s macro-level benefits rather than its own micro-level profit. The importance of individual versus social optimization of admission to a queuing system is well known. In the early stage of this type of research (Naor, 1969; Yechiali, 1971; Knudesen, 1972; Lippman and Stidham, 1975; Mendelson and Yechiali, 1981), modes were restricted to the case of a fixed-capacity queuing system and study the optimal balking policies as a function of the number of customers in the queue were studied. They have shown that the use of queue size as a rationing device cannot lead to an optimal allocation of resources unless prices are simultaneously imposed. The pricing and long-run capacity (flexible-capacity) decisions of a service facility have been studied by Mendelson (1985). Since then, papers have built on this framework by studying multiclass queue and incentive-compatible priority pricing (Dewan and Mendelson, 1990; Mendelson and Whang, 1990; Stidham, 1992; Hassin, 1998; Ha, 1998; Cachon and Harker, 2002). It is not as clear, however, what the implications of these effects on the management and control of in-house logistics divisions are, thus there is a gap between the technical level and the management level. This gap limits the ability of an in-house logistics manager to make sound resource allocation and capacity decisions, and hampers his ability to justify investments for the purpose of improving response time, increasing order fill rate, or reducing costs to high-level management. As third-party-logistics (3PL) is emerging as a selectable strategy, a firm should decide which kinds of logistic services are suitable for outsourcing, and which ones should be kept in-house. So far, however, we rarely find rigorous mathematical proofs to support such logistics decision-making.