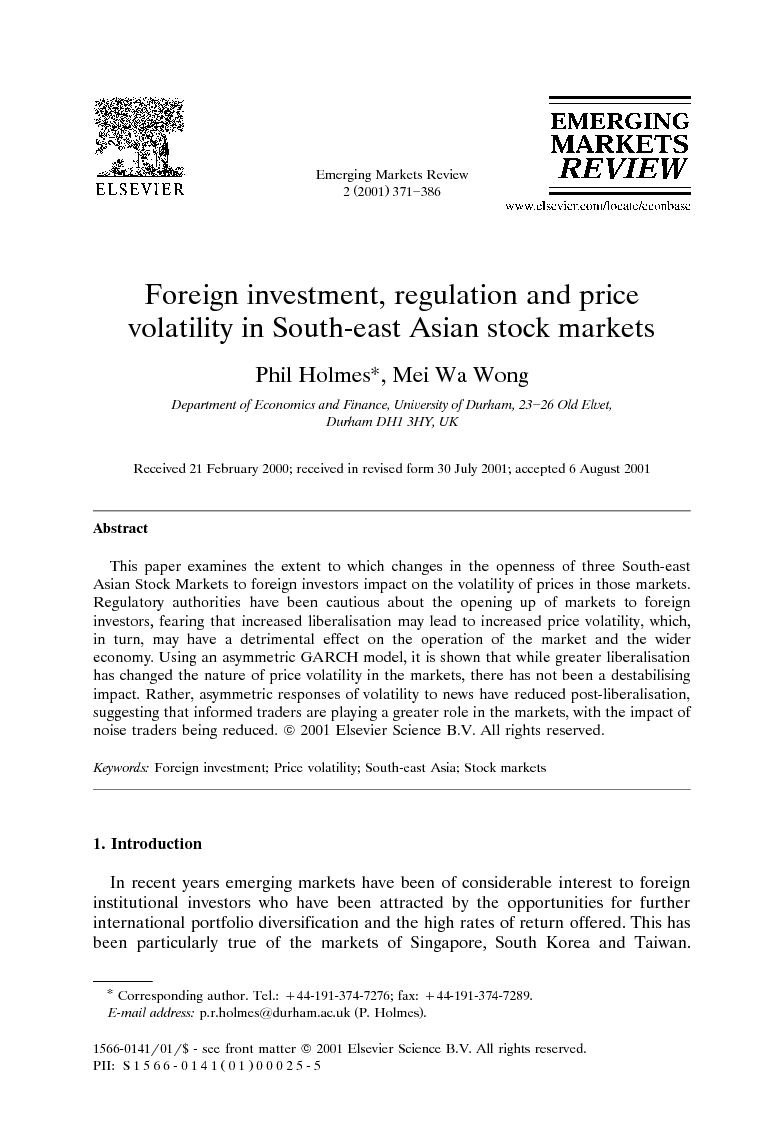 This paper examines the extent to which changes in the openness of three South-east Asian Stock Markets to foreign investors impact on the volatility of prices in those markets. Regulatory authorities have been cautious about the opening up of markets to foreign investors, fearing that increased liberalisation may lead to increased price volatility, which, in turn, may have a detrimental effect on the operation of the market and the wider economy. Using an asymmetric GARCH model, it is shown that while greater liberalisation has changed the nature of price volatility in the markets, there has not been a destabilising impact. Rather, asymmetric responses of volatility to news have reduced post-liberalisation, suggesting that informed traders are playing a greater role in the markets, with the impact of noise traders being reduced.

In recent years emerging markets have been of considerable interest to foreign institutional investors who have been attracted by the opportunities for further international portfolio diversification and the high rates of return offered. This has been particularly true of the markets of Singapore, South Korea and Taiwan. However, until relatively recently foreign participation in some stock exchanges was limited by formal restrictions on foreign investment, resulting from a general fear that an influx of foreign investors may destabilise the market. This, in turn, is expected to make prices more volatile, increase perceived riskiness and hence the cost of capital, and thus threaten the growth of the economy as a whole. The extent to which the increased openness of less well established markets impacts on stock price volatility is important, not only because it may lead to a change in perceived riskiness, but also because it is likely to impact on the degree to which regulators liberalise markets and encourage the movement of foreign investors into the market. This, in turn, will have important implications for the ability of firms in emerging markets to raise capital and will impact on a country's ability to maintain high long-term growth. However, although the issues of stock market integration and volatility spillover between mature and emerging stock markets have been widely addressed, there have been no direct studies of the impact of the openness to foreign investment on the level and nature of volatility of individual South-east Asian stock markets. Such a study is of importance, since it provides insights into the impact of foreign investors on price volatility and thus informs regulators’ decisions. Specifically, by examining the extent to which opening up the market changes the asymmetric response of volatility to news, it is possible to determine whether foreign investors increase the impact of noise traders or whether price movements are more related to information post-liberalisation than they were previously. In addition, by examining the impact on the level of volatility it is possible to determine whether the fear relating to liberalisation is warranted. We seek to address a gap in the literature in this paper, by examining the nature and structure of volatility in the stock exchanges of the three South-east Asian markets of Singapore, South Korea and Taiwan, both before and after the opening up of these markets to foreign investors. We will argue that while increased openness does raise the possibility of foreign investors having a destabilising impact by rapidly moving into and out of the market, it is also the case that increased openness for foreign investors may lead to an increase in the number and influence of informed traders in the local market. This may reduce the effect of noise trading and positive feedback trading on market volatility, which in turn may affect the asymmetric response of volatility to news. Such an effect, far from being detrimental to the stock exchange in question and the broader economy, may improve efficiency, increase investor confidence and bring tangible benefits to the economy. Clearly, such an impact provides important information to regulators considering opening up their markets to foreign investors. The rest of the paper is organised as follows. Section 2 briefly discusses arguments about the possible link between foreign investment and local stock market volatility, briefly discusses relevant work on South-east Asian stock markets and identifies shortcomings of this work. Section 3 provides an outline of the major changes over the last decade in each of the three stock markets in relation to foreign investment. Empirical design and data description are given in Section 4, while Section 5 reports and discusses the empirical results. Finally, Section 6 provides concluding remarks and discusses the implications of the findings.

In this paper, we seek to measure directly the impact of increasing foreign investment opportunities in local stocks on the level and nature of volatility of three South-east Asian stock markets, namely Singapore, South Korea and Taiwan. The opening up of the Taiwan and Korea Stock Exchanges and the institutional changes in Singapore in the early 1990s which have led to an increase in foreign investment opportunities have provided an opportunity to assess the impact of increased openness for foreign investors. In addition, this study provides the first direct examination of the asymmetric responses of volatility to news in these South-east Asian stock markets, both before and after they became more liberalised or attractive to foreign investors. The results show that the effect of increasing foreign investment opportunities in local stock markets has come through a reduction in volatility and in asymmetries in the three markets. In all markets the liberalisation has led to a fall in volatility, although the effect is insignificantly different from zero for Korea. Furthermore, asymmetric effects have fallen substantially in all markets. It appears that as the opportunities for foreign investment increased, informed traders became more dominant in the market, and thus the impact of noise trading on volatility was reduced. Hence, the evidence presented here does not support the view that opening up the markets has had a destabilising impact on the markets. On the contrary, the view that liberalisation can have a positive impact on local markets is supported by these results.