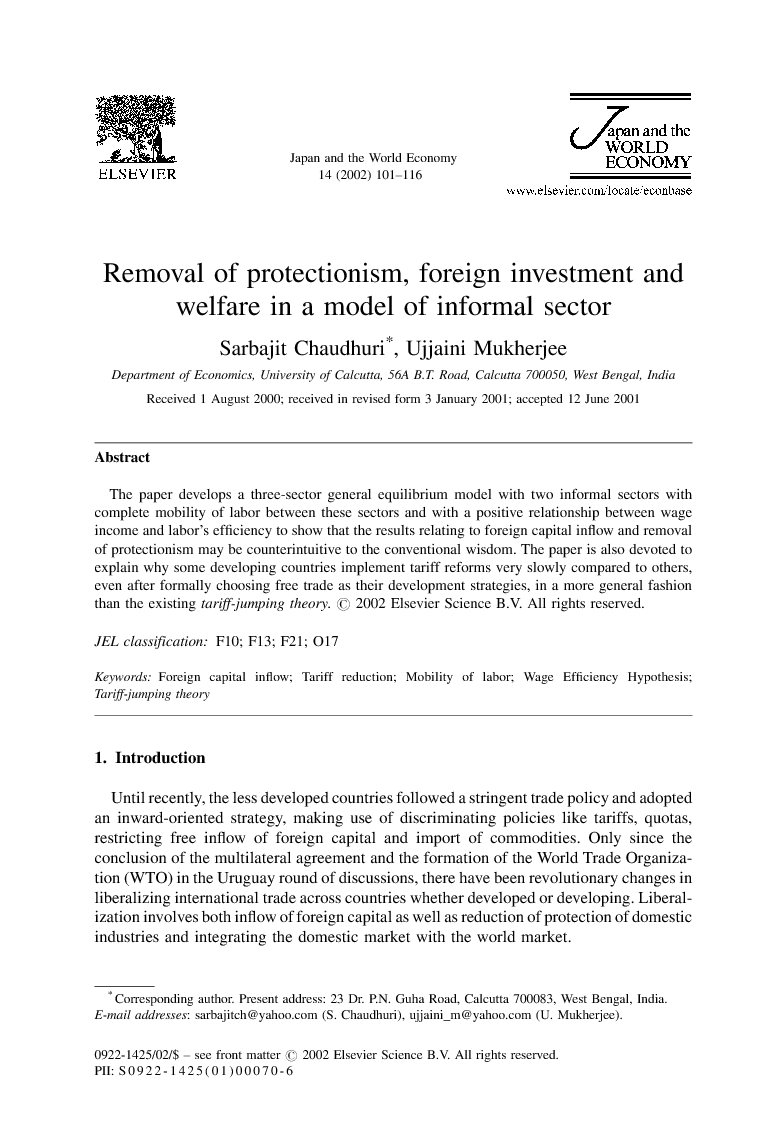 The paper develops a three-sector general equilibrium model with two informal sectors with complete mobility of labor between these sectors and with a positive relationship between wage income and labor’s efficiency to show that the results relating to foreign capital inflow and removal of protectionism may be counterintuitive to the conventional wisdom. The paper is also devoted to explain why some developing countries implement tariff reforms very slowly compared to others, even after formally choosing free trade as their development strategies, in a more general fashion than the existing tariff-jumping theory.

Developing countries have been vigorously implementing trade liberalization policies for the last decade and a half. However, many developing countries are implementing their tariff reforms at slower rates than the average rate, although these are successful in attracting substantial amount of FDI. The present paper provides explanation as to why they are walking behind others with respect to the pace of tariff reforms, more satisfactorily than the existing tariff-jumping theory. It shows that foreign capital inflow may be desirable from the welfare perspective of the developing countries, if there exist two distortions rather than one in the markets: a commodity market distortion in the form of tariff and a labor market distortion in the form of unionized wage, and also if the efficiency of labor is positively related to the average wage in the economy. Besides, the paper has pointed out that a reduction of tariff may act as deterrent to FDI even if it flows into the export sector of the economy. Moreover, tariff reduction also lowers welfare directly by reducing the rental income from domestic capital stock as well as the labor income through reallocation of labor among the different sectors of the economy. However, we need not be too much worried about the static effects of implementing free trade, which are likely to prove costly for the developing countries. In the absence of protection, the inefficiency of the inward-oriented firms will be exposed, and their survival will be difficult unless they adjust radically to the new environment. However, they expect to benefit from the new opportunities generated by the dynamic effects of free trade. Indeed, estimates indicate that further reforms coupled with more domestic and foreign investment could make the benefits of free trade outweigh its costs and actually increase the welfare. Lifting protection is expected to make firms behave more efficiently and adapt to international requirements. The dampening effects of removal of protectionism on FDI can be overcome by other liberalization policies like simplification of repatriations laws, reduction of obligatory export requirements, opening up of hitherto unexposed sectors to the MNCs, etc. These policies, if successfully undertaken, are expected to stimulate FDI, which is crucial. FDI in the export sector shoots up exports and in the import-competing sector reduces the total imports. Expansion of the export sector is expected to increase employment, since in the LDCs this sector is generally the more labor-intensive one. The end result will depend on the net outcome of destruction and creation effects of tariff reduction and stimulation of foreign investment.