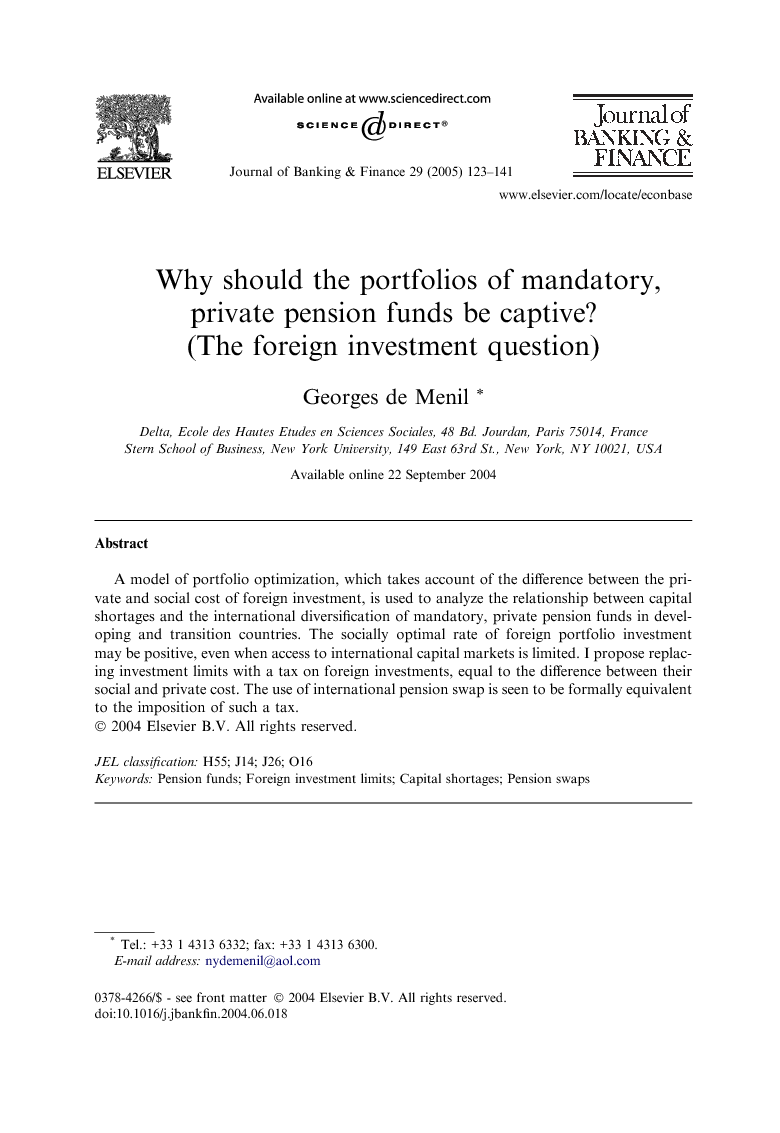 A model of portfolio optimization, which takes account of the difference between the private and social cost of foreign investment, is used to analyze the relationship between capital shortages and the international diversification of mandatory, private pension funds in developing and transition countries. The socially optimal rate of foreign portfolio investment may be positive, even when access to international capital markets is limited. I propose replacing investment limits with a tax on foreign investments, equal to the difference between their social and private cost. The use of international pension swap is seen to be formally equivalent to the imposition of such a tax.

From Chile in 1981 to Croatia in 2002, the architects of mandatory, private pension funds (MPPFs) have engaged in intense debate over foreign investment limits. Some have held that the principal objective of these systems – enhancing the well being of working people in their retirement years – is furthered by allowing them to enjoy the benefits of international diversification. Others have argued that the limited access that developing and transition countries have to international financial markets points to an important, second purpose for these schemes – to raise low levels of national saving, and provide new sources of capital for domestic investment. In the interests of this second objective, it is argued that MPPF funds should largely be restricted to domestic investments. In fact, foreign investment limits have remained low in most of developing and transition countries with MPPFs. This paper analyzes the relationship between international diversification and capital shortages in a simple model of portfolio optimization. The conclusion is that the foreign diversification which is in the private interests of the beneficiaries is compatible, to a certain degree, with the development priorities of countries faced with a balance of payments constraint. The analysis shows that, even if capital is scarce because the access to international capital markets is limited, the optimal rate of foreign investment is not necessarily zero. The focus in this analysis on the wedge between the private and social costs of foreign investment leads naturally to a proposal to replace investment limits with a tax on foreign investments, thereby forcing investors to internalize social costs, and placing the burden of predicting the variability of costs and returns squarely with fund managers. The model also throws light on the suggestion by Bodie and Merton (2003) that foreign diversification can be reconciled with capital shortages through the use of international pension swaps. When the economic costs, which are associated with these contracts in capital constrained countries, are incorporated into the analysis, the free use of international swaps is seen to be formally equivalent to the regime in which foreign investment bears the socially optimal tax described above. Important institutional arguments for and against each of these two regimes are evoked. In some countries, where there is no tradition of successful financial regulation, it may be prudent to continue to use quantitative ceilings to regulate foreign investment. In such cases, these limits should be reviewed regularly in the light of the considerations examined here. Whatever regulatory strategy is followed, limits on foreign investment should eventually disappear, when access to international capital becomes unrestricted, as it will, for instance, when EU accession countries join the European Monetary Union.