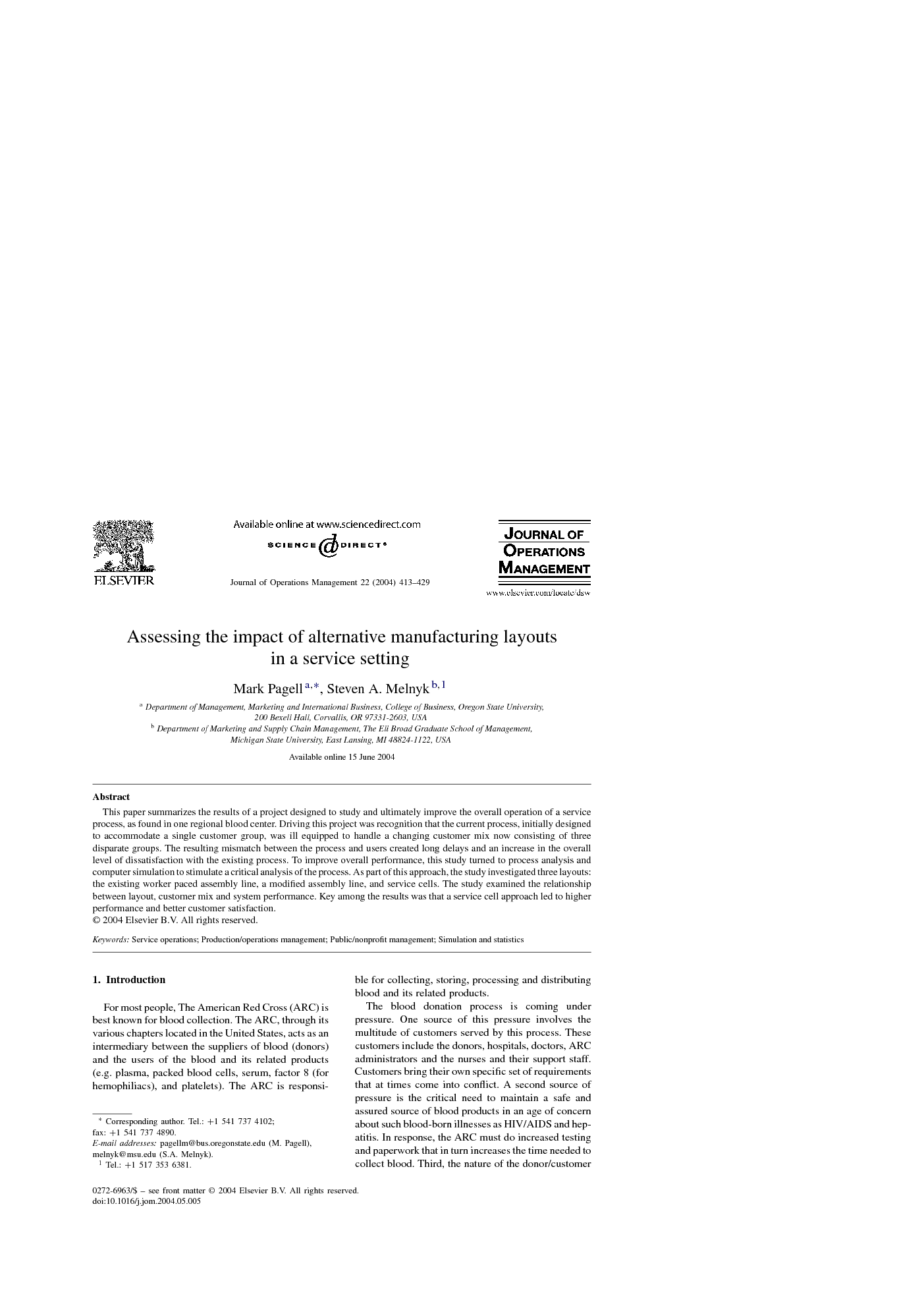 This paper summarizes the results of a project designed to study and ultimately improve the overall operation of a service process, as found in one regional blood center. Driving this project was recognition that the current process, initially designed to accommodate a single customer group, was ill equipped to handle a changing customer mix now consisting of three disparate groups. The resulting mismatch between the process and users created long delays and an increase in the overall level of dissatisfaction with the existing process. To improve overall performance, this study turned to process analysis and computer simulation to stimulate a critical analysis of the process. As part of this approach, the study investigated three layouts: the existing worker paced assembly line, a modified assembly line, and service cells. The study examined the relationship between layout, customer mix and system performance. Key among the results was that a service cell approach led to higher performance and better customer satisfaction.

For most people, The American Red Cross (ARC) is best known for blood collection. The ARC, through its various chapters located in the United States, acts as an intermediary between the suppliers of blood (donors) and the users of the blood and its related products (e.g. plasma, packed blood cells, serum, factor 8 (for hemophiliacs), and platelets). The ARC is responsible for collecting, storing, processing and distributing blood and its related products. The blood donation process is coming under pressure. One source of this pressure involves the multitude of customers served by this process. These customers include the donors, hospitals, doctors, ARC administrators and the nurses and their support staff. Customers bring their own specific set of requirements that at times come into conflict. A second source of pressure is the critical need to maintain a safe and assured source of blood products in an age of concern about such blood-born illnesses as HIV/AIDS and hepatitis. In response, the ARC must do increased testing and paperwork that in turn increases the time needed to collect blood. Third, the nature of the donor/customer base is changing. In the past, the ARC collected blood from one type of donor, the regular donor who gives to the general pool. Now this same blood donation process must deal with two new categories of donors: (1) autologous, who give blood for their own use; and (2) directed, who give blood for a specific person. Each category must be handled differently in terms of paperwork and processing requirements. Finally, the ARC must deal with the challenge of keeping the regular donor, who is the primary base of support and blood supply, satisfied while simultaneously meeting the demands placed on the blood donation process by the preceding factors. The blood donation process is dependent on volunteers. Since it does not pay for its blood, the ARC can only assure the future availability of its blood supplies by keeping these volunteer donors content. Central to this task is the need to ensure the amount of time spent giving blood is kept both short and predictable. The ARC now faces an environment familiar to most managers. Processes initially designed to efficiently meet the needs of one specific type of customer/user are now stressed by the need to provide service to many different customers/users. Additionally, the ARC faces increased competition. Therefore, the ARC must restructure their service processes so that they can serve the varying needs of the different customer groups without raising the system’s costs. As a result, administrators at both the regional and national levels of the ARC are reexamining the blood donation process with the goal of improving its overall effectiveness and efficiency. This paper describes and summarizes the results of a project carried out to help the administrators of the Great Lakes Region of the ARC in this task. This project focused its attention on the relationship between the layout of the process, customer mix, and overall performance. In selecting layout as a critical dimension of analysis, the researchers were drawing on the insights and results gained from studies carried out in the manufacturing arena that have concentrated on plant layout. As has been shown in numerous studies (e.g. Flynn and Jacobs, 1987, Kinney and McGinnis, 1987, Shafer and Charnes, 1993 and Shafer and Meredith, 1993), the change in plant layout and workflows can have a significant impact on system performance. This awareness of the importance of layout has also been recognized within many areas of the service sector (e.g. Usher et al., 1990). The project evaluated three different layouts for the blood donation process: (1) the current worker-paced assembly line system in place; (2) a modified assembly system; and (3) a service cell approach. These three layouts were assessed using computer simulation. The data for this series of simulations was collected from the Lansing Blood Center in Lansing, Michigan.

The ARC was facing a situation where their user base was becoming increasingly more heterogeneous at the same time that competition was increasing the need to control costs. Their existing processes could not serve any of the customer groups in the expected manner, but cost constraints prohibited hiring additional people. Because of constraints governing the execution of the individual steps, the only option open to management was to focus on process layout. The results of this simulation study suggest that varying a layout in a service setting can have significant effects on system performance. More importantly the choice of layout will probably induce (it does in this case) trade-offs among customer groups. Finally, the ease of reconfiguring many services, and some unique goods producers, suggests that managers who have good data may be able to optimize performance by changing configurations as their customer mix changes—a tool that becomes even more powerful with good demand management. The results also have some theoretical implications. First, we show that real cells can exist in service settings, suggesting that existing definitions are too narrow. In addition, the results show that service providers face similar trade-offs among different layouts as those faced by manufactures, suggesting that theory on manufacturing layouts can be expanded to include services. However, the results suggest that there are some differences between services and manufactures that serve as boundary conditions in our theory concerning layout choices. For instance the queue in a service setting will be composed of the actual customers who will be concerned with perceptual waiting times as well as actual waiting times. And of greatest importance the ease of reconfiguring the layout in many service settings has significant implications for how mangers need to think about layout decisions