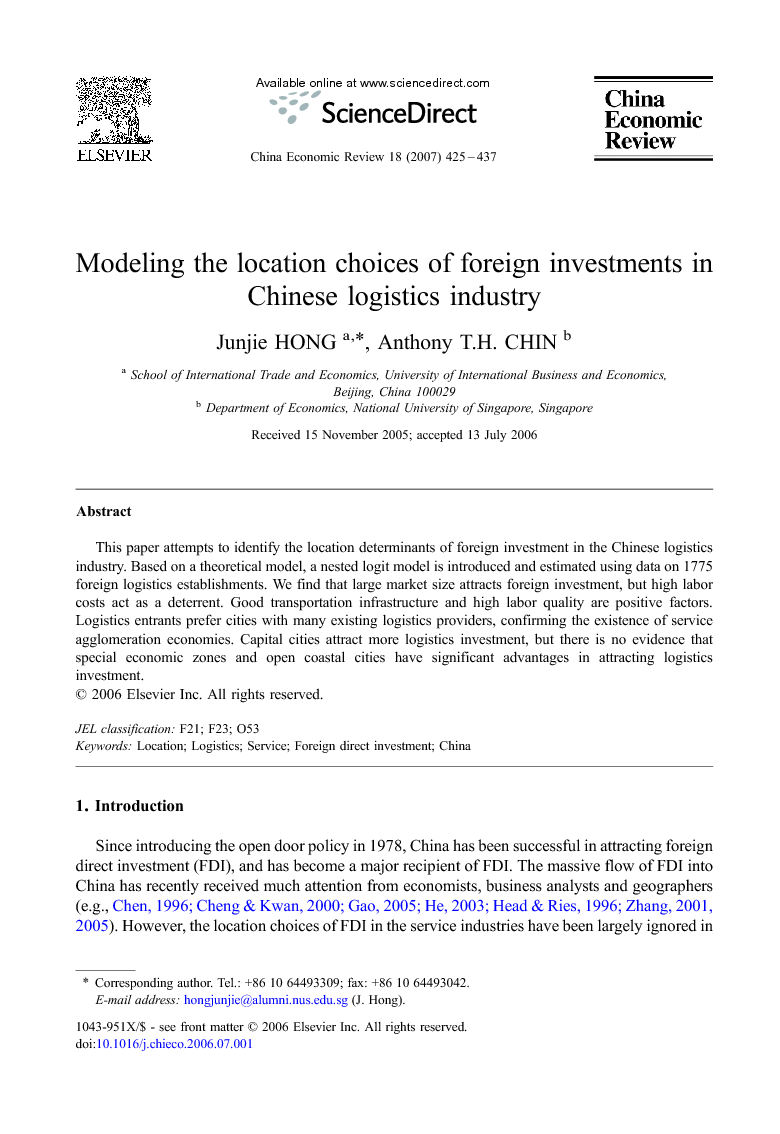 This paper attempts to identify the location determinants of foreign investment in the Chinese logistics industry. Based on a theoretical model, a nested logit model is introduced and estimated using data on 1775 foreign logistics establishments. We find that large market size attracts foreign investment, but high labor costs act as a deterrent. Good transportation infrastructure and high labor quality are positive factors. Logistics entrants prefer cities with many existing logistics providers, confirming the existence of service agglomeration economies. Capital cities attract more logistics investment, but there is no evidence that special economic zones and open coastal cities have significant advantages in attracting logistics investment.

Since introducing the open door policy in 1978, China has been successful in attracting foreign direct investment (FDI), and has become a major recipient of FDI. The massive flow of FDI into China has recently received much attention from economists, business analysts and geographers (e.g., Chen, 1996, Cheng and Kwan, 2000, Gao, 2005, He, 2003, Head and Ries, 1996, Zhang, 2001 and Zhang, 2005). However, the location choices of FDI in the service industries have been largely ignored in the existing literature. This paper studies the location behavior of FDI in the Chinese logistics industry. As economic and market globalization deepens, logistics, managing the material flow from raw materials to end customers, has emerged as a critical aspect of rapid internationalization (Oum & Park, 2004). Although the Chinese logistics market is still in its infancy, tremendous opportunities in the market have attracted significant attention from both domestic and foreign investors (Hong, Chin, & Liu, 2004). It has been widely recognized as an important driving force for the national economy. Prior to economic reform in China, the logistics market was dominated by several state-owned logistics enterprises. Since the economic reform of the late 1970s, the logistics industry has been transformed from an industry dominated by a few large state-owned enterprises to one consisting of many private-owned and foreign logistics providers. With the development of the Chinese economy, the logistics industry has entered a stage of fast growth since the 1990s. Logistics related spending in China amounted to RMB 240 billion in 20031. Specialist logistics businesses2 have flourished. Between 2001 and 2003, 70% of logistics service providers experienced a 30% annual increase in business (Bolton & Wei, 2003). The promising market potential has encouraged many foreign investors to enter the market, including two thirds of the world's top 10 retailers and purchasing centers. At the same time, some Chinese cities (such as Shanghai, Tianjin and Shenzhen) are attempting to establish themselves as regional or international logistics hubs. For instance, the government has approved a plan to turn Shanghai into a logistics hub for East Asia. Attracting world-class logistics providers is a key challenge for those who aim to be logistics hubs (Oum & Park, 2004). With the flow of foreign investments into the logistics industry and increasing competition between cities to establish themselves as logistics hubs, it is important to understand the inter-city location behavior of foreign logistics investments. Although there are a lot of studies on FDI location in the literature (e.g., Chen, 1996, Cheng and Kwan, 2000, Coughlin et al., 1991, Gao, 2005, Guimaraes et al., 2000, He, 2003 and Zhang, 2005), most of them study manufacturing FDI. The research on location behavior of service FDI is just at the beginning (e.g., Markusen et al., 2000 and Tisdell and Wen, 1991), and only one study (Oum & Park, 2004) examines the location of foreign investment in a logistics industry according to the best of our knowledge. Through a structured questionnaire-based survey, Oum and Park (2004) identified the main location determinants of multinational distribution centers as follows: market size, transport infrastructure, labor quality and government policies. The authors also concluded that at the moment, China was most likely to be a logistics hub in the Northeast Asian region due to its advantage in market size. Hence, this research contributes to the existing literature by studying the location of FDI in a service industry in China, which has been largely ignored by previous studies. It uses precise information at the firm level, considering only foreign logistics investments. Based on an economic model that incorporates the characteristics of services, we will develop an econometric model and identify the location determinants of foreign logistics establishments. Some implications will be derived for policy makers at the end. The remainder of this paper is organized as follows. Section 2 develops a theoretical model to study the inter-city location of logistics services. Section 3 introduces the data source and explanatory variables. Section 4 discusses the estimations results, while the final section gives concluding remarks and policy implications.