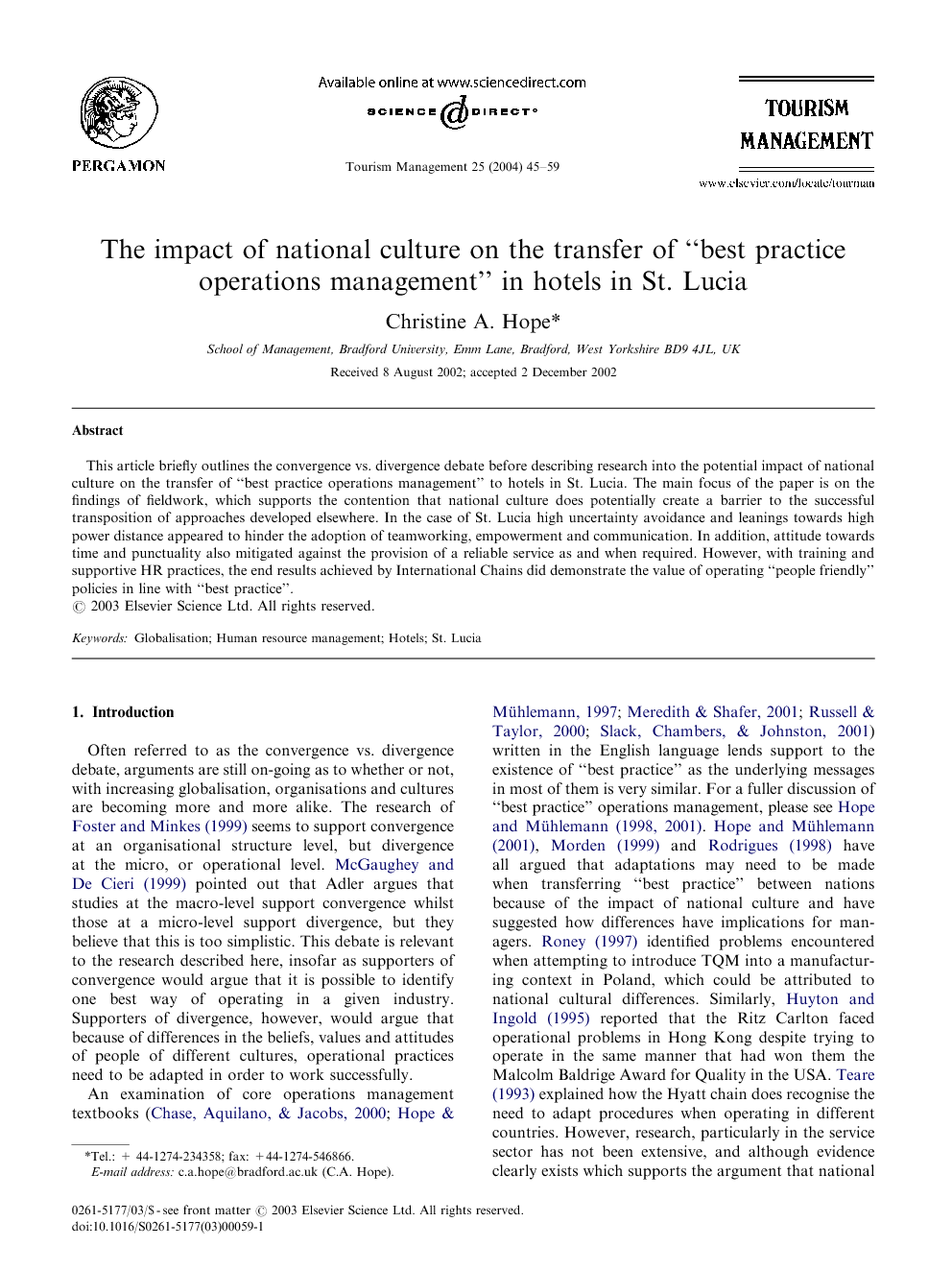 This article briefly outlines the convergence vs. divergence debate before describing research into the potential impact of national culture on the transfer of “best practice operations management” to hotels in St. Lucia. The main focus of the paper is on the findings of fieldwork, which supports the contention that national culture does potentially create a barrier to the successful transposition of approaches developed elsewhere. In the case of St. Lucia high uncertainty avoidance and leanings towards high power distance appeared to hinder the adoption of teamworking, empowerment and communication. In addition, attitude towards time and punctuality also mitigated against the provision of a reliable service as and when required. However, with training and supportive HR practices, the end results achieved by International Chains did demonstrate the value of operating “people friendly” policies in line with “best practice”

Often referred to as the convergence vs. divergence debate, arguments are still on-going as to whether or not, with increasing globalisation, organisations and cultures are becoming more and more alike. The research of Foster and Minkes (1999) seems to support convergence at an organisational structure level, but divergence at the micro, or operational level. McGaughey and De Cieri (1999) pointed out that Adler argues that studies at the macro-level support convergence whilst those at a micro-level support divergence, but they believe that this is too simplistic. This debate is relevant to the research described here, insofar as supporters of convergence would argue that it is possible to identify one best way of operating in a given industry. Supporters of divergence, however, would argue that because of differences in the beliefs, values and attitudes of people of different cultures, operational practices need to be adapted in order to work successfully. An examination of core operations management textbooks (Chase, Aquilano, & Jacobs, 2000; Hope & Mühlemann, 1997; Meredith & Shafer, 2001; Russell & Taylor, 2000; Slack, Chambers, & Johnston, 2001) written in the English language lends support to the existence of “best practice” as the underlying messages in most of them is very similar. For a fuller discussion of “best practice” operations management, please see Hope and Mühlemann (1998) and Hope and Mühlemann (1998 (2001). Hope and Mühlemann (2001), Morden (1999) and Rodrigues (1998) have all argued that adaptations may need to be made when transferring “best practice” between nations because of the impact of national culture and have suggested how differences have implications for managers. Roney (1997) identified problems encountered when attempting to introduce TQM into a manufacturing context in Poland, which could be attributed to national cultural differences. Similarly, Huyton and Ingold (1995) reported that the Ritz Carlton faced operational problems in Hong Kong despite trying to operate in the same manner that had won them the Malcolm Baldrige Award for Quality in the USA. Teare (1993) explained how the Hyatt chain does recognise the need to adapt procedures when operating in different countries. However, research, particularly in the service sector has not been extensive, and although evidence clearly exists which supports the argument that national culture does have an impact on the successful transfer of “best practice”, knowledge is still sketchy regarding just what nuances of culture impact on which aspects of “best practice”.

As Tayeb (2001) has pointed out, researchers looking at the impact of culture are rarely in the ideal position of having the resources to conduct a large-scale study. The research reported here was clearly limited in scope and was intended as an exploratory or pilot study. One of the underlying principles of “best practice operations management” is that there should be quality of design and conformance to design. In order to produce a good or service consistently, which meets design specifications “first-time, every time”, it is necessary to design and manage the delivery or production process to do so. In this research, the focus has been on the delivery process—“how” the service is delivered, not the “what” or end product. As such, issues relating to cultural differences between customer and provider and between customers have not been addressed in this research. However, the research has provided some evidence to support the contention that cultural differences do have an impact on the management of operations in hotels in St. Lucia. In some ways the results were surprising and to an extent contrary to expectations. The locally owned and smallest of the hotels had the least happy employees and it was clear to the author that there were operational inefficiencies and a lack of “best practice” implementation, e.g. the practice of checking, double checking and even triple checking that employees did what they were supposed to do was the norm. The employees clearly did not feel as though they were valued. As this was the smallest of the hotels studied, some of the problems could have been seen as due to lack of resources, however as one employee stated: “… nobody appreciates us, so what more can I say …”—how much does it cost to give praise and thanks in appreciation for a good job well done? The most likely explanation for the problems observed in this hotel was a lack of understanding of the role of management in implementing “best practice”—the emphasis was on the end product rather than the processes. There was ample evidence of knowledge and a clear understanding of “best practice operations management” across most of the ten management aspects covered in the interviews in the larger three hotels, but the adoption and implementation of certain aspects did falter and initial resistance to some approaches could be explained by cultural differences. “Best practice” in service operations management advocates the provision of training, support and rewards to employees, and ensuring excellent communication between employees. The employees of the two hotels that had most closely followed and successfully implemented “best practice” came out top when employees were asked “do you like your job?” Two factors in particular seemed to improve the acceptance and successful transfer of “best practice” type approaches: a greater emphasis on training and senior management who “practised what they preached”. There is evidence to suggest, therefore, that “best practice” is transferable and will lead to improved service quality in hotels on the Island. However, the training may have to be tailored to local conditions and take into account cultural differences, and true empowerment may be difficult to achieve. Nevertheless, providing that standard operations procedures are implemented sensibly, taking into account the local context and culture, the basic tenets of “best practice operations management” do appear to be transferable—with care and effort.