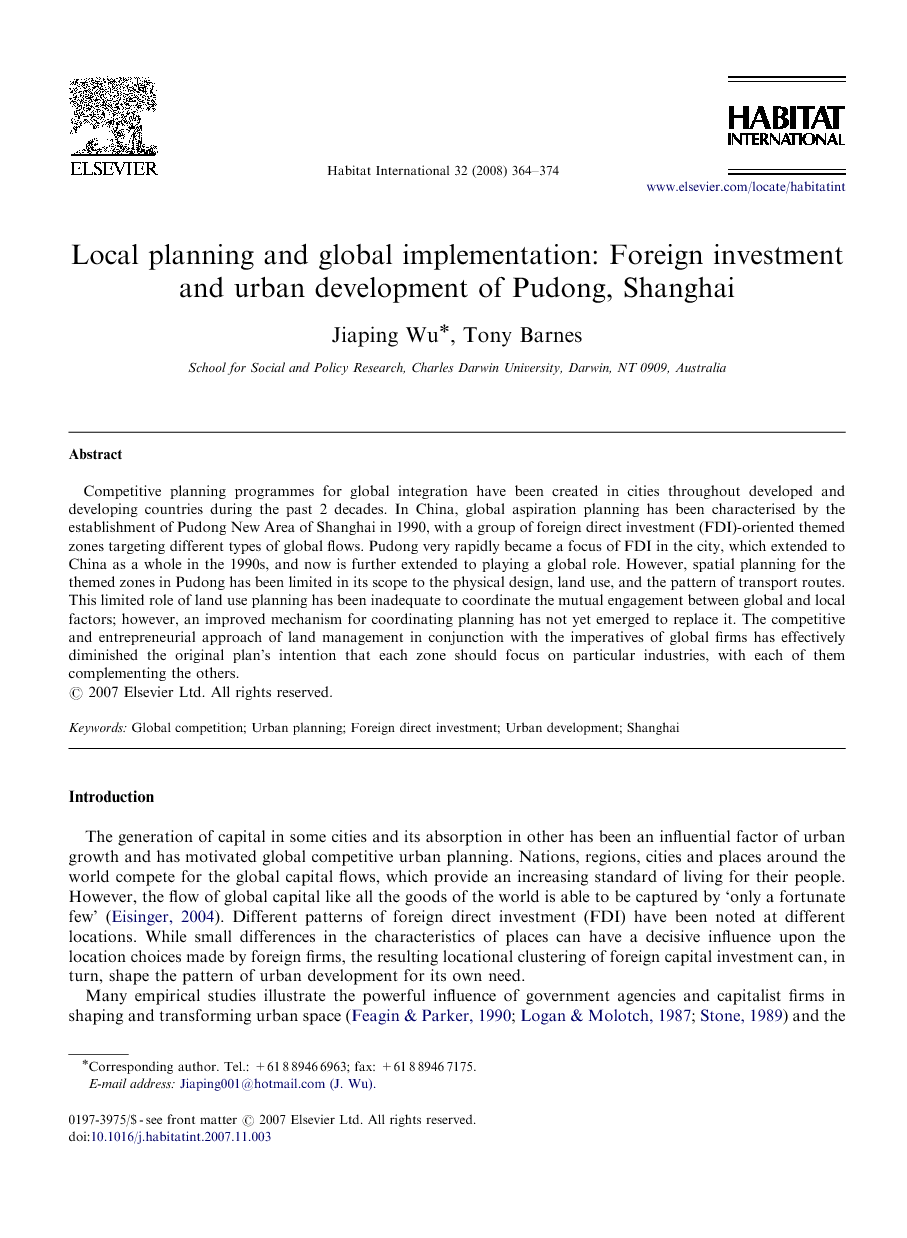 Competitive planning programmes for global integration have been created in cities throughout developed and developing countries during the past 2 decades. In China, global aspiration planning has been characterised by the establishment of Pudong New Area of Shanghai in 1990, with a group of foreign direct investment (FDI)-oriented themed zones targeting different types of global flows. Pudong very rapidly became a focus of FDI in the city, which extended to China as a whole in the 1990s, and now is further extended to playing a global role. However, spatial planning for the themed zones in Pudong has been limited in its scope to the physical design, land use, and the pattern of transport routes. This limited role of land use planning has been inadequate to coordinate the mutual engagement between global and local factors; however, an improved mechanism for coordinating planning has not yet emerged to replace it. The competitive and entrepreneurial approach of land management in conjunction with the imperatives of global firms has effectively diminished the original plan's intention that each zone should focus on particular industries, with each of them complementing the others.

The generation of capital in some cities and its absorption in other has been an influential factor of urban growth and has motivated global competitive urban planning. Nations, regions, cities and places around the world compete for the global capital flows, which provide an increasing standard of living for their people. However, the flow of global capital like all the goods of the world is able to be captured by ‘only a fortunate few’ (Eisinger, 2004). Different patterns of foreign direct investment (FDI) have been noted at different locations. While small differences in the characteristics of places can have a decisive influence upon the location choices made by foreign firms, the resulting locational clustering of foreign capital investment can, in turn, shape the pattern of urban development for its own need. Many empirical studies illustrate the powerful influence of government agencies and capitalist firms in shaping and transforming urban space (Feagin & Parker, 1990; Logan & Molotch, 1987; Stone, 1989) and the impact of globalisation (Smith & Feagin, 1987). Shanghai has become China's major laboratory for neoliberal policy experiments since the 1990s, with many spatial strategies undertaken to allow for global influences. Much literature has been produced, providing insights into the global linkages that foreign investments have brought to Shanghai and the social and spatial transformation of the city (e.g. Wei, Leung, & Luo, 2006; Wu (2000) and Wu (2003); Zhang, 2002). These include FDI-oriented institutional reform and spatial planning (Marton & Wu, 2006; Olds, 1997), spatial patterns of FDI (Wu & Radbone, 2005) and concentration of FDI in land market in the city (Zhu, Sim, & Zhang, 2006). Pudong New Area (PNA), a 522 km2 triangular area east of Huangpu River in Shanghai, is a major project that planned to reposition Shanghai in the global economy. It provides a clear indication of the government's intended policy directions for urban development by the attraction of FDI. The major objective is to turn Shanghai into “China's national financial centre by 2000, Asia's regional financial hub by 2005, and a global financial centre by 2010” (Shi & Hamnett, 2002, p. 129). A group of FDI-oriented themed zones targeting different types of global flows have been created in Pudong, by which each zone focused on particular industries, with each of them complementing the others. The industrial distinctiveness of the themed zones was then to be facilitated through a series of land use planning. Urban planning is the legitimate force to regulate spaces, mobilise resources and coordinate factors that shape cities, including those “from the state as well as from both the private sector and civil society, each of whom brings relevant knowledge to the table” (Friedmann, 2005, p. 213). While there is a great deal of interest in both the growth in amount of global capital inflows and the development of responsive urban planning of cities, little attention has been given to exploring or explaining how the global capital flows being mobilised influence the implementation of local urban plans. This paper uses the planning and development of Pudong as a case study, dealing with global competitive urban planning in general and the development of Pudong specifically. Questions posed in the discussion include the following: What are the special features of urban planning in Pudong that are attractive to FDI? What types of global capital flows have been attracted to Pudong? How have these global flows been mobilised to implement the local plans, in particular the implementation of the distinct themes or characterisations of the planned areas? Have the foreign capital investments followed the intent of local plans, and if so, to what extent? What are the social, economic and spatial consequences? What are the challenges of economic globalisation facing the urban planning professional that emerge from the example of Pudong? Following this introduction, a theoretical insight into the international competitiveness of cities and the global competitive planning approach is given. In the third section, we review China's strategies of global integration and the planning of Pudong. We then deal with the growth of FDI and its economic and spatial characteristics in Pudong in section four. A discussion of the impact of FDI on the implementation of Pudong's plans, and in particular plans dealing with the industrial distinctiveness of themed zones is presented in the fifth section. This is followed by a conclusion.

Spatial allocation was the core of China's city planning, which was previously an important component of the nation's economic planning. Its main task was to assist the physical co-ordination of centrally allocated projects in cities, which dominated the use of available urban development funds. The allocation and location of these projects might have sometimes bypassed the local planning authorities but, through central planning requirements, they could be coordinated within the governmental system. Since the early 1990s the tool of urban planning has once again been used to facilitate the ambitious development of Pudong. The implementation of development plans in Pudong, however, has this time been driven by foreign capital rather than by the central allocation. By its very nature, foreign capital pursues profits and operates outside of the governmental systems. Foreign firms choose locations in particular places for their own reasons and to meet their own ends. The designation of PNA has been successful in terms of ‘selling’ Shanghai in the global market. FDI in Shanghai has increased dramatically. Pudong, which attracted a very small amount of FDI in the 1980s, became a focus of FDI in the city as well as in China in the 1990s, and is now playing a significant global role. The influence of FDI has been manifested in both the spatial and functional development of the themed zones in Pudong. The entrepreneurial practices of ACPNA have succeeded in raising the funds needed for physical development. The development corporation's manipulation of the land market to attract FDI has played a decisive role in the physical expansion of the themed zones, which has provided room for DCs to negotiate with foreign investors. The developments resulting from these spatial practices and the features of FDI agglomerations often prevail over the statutory plans and have been very influential in shaping the patterns of urban growth. The planning innovation in Pudong, however, has been less successful in reinforcing the functional identity of each of the themed zones. The designed urban function, by which each zone focused on particular industries, and complemented those of the others, has been diminished. Economic structures and land development in the zones now tends to be similar. The scattered distribution of service FDI has been an unfortunate feature undermining the implementation of urban plans in the LFTZ. The planned creation of an international financial centre in the Lujiazui central area has not occurred as distinctively as expected. Pudong as a whole now represents a manufacturing site for MNCs. The reasons for the discrepancy between the original plans and the actual development are probably due to the complex nature of the imperatives of global firms, which are difficult for local planning to fully capture. The physical impact of the entrepreneurial practices of land development and the haphazard competition for foreign investment between the themed zones is obvious. In addition, the already small opportunities and narrow channels for local participation in the development of Pudong diminished throughout the 1990s. Urban planning remains but is limited in its scope to the physical design, land use, and the pattern of transport routes, which cannot functionally coordinate the mutual engagement between global and local factors and new coordination mechanisms have not emerged to replace the reduced role of spatial planning. Managers of DCs, urban planners and foreign investors, each play by their own rules but are not playing the same game while local people has been excluded altogether from the globalising game in Pudong. The planning context of China has been fundamentally changed over the past 2 or 3 decades. While the interests of unplanned and unplannable global capital flows have often called the tune in the transformation of the city. Planning professionals and planning students in China need to be well informed from both global and local perspectives in order to both serve and coordinate urban development effectively.