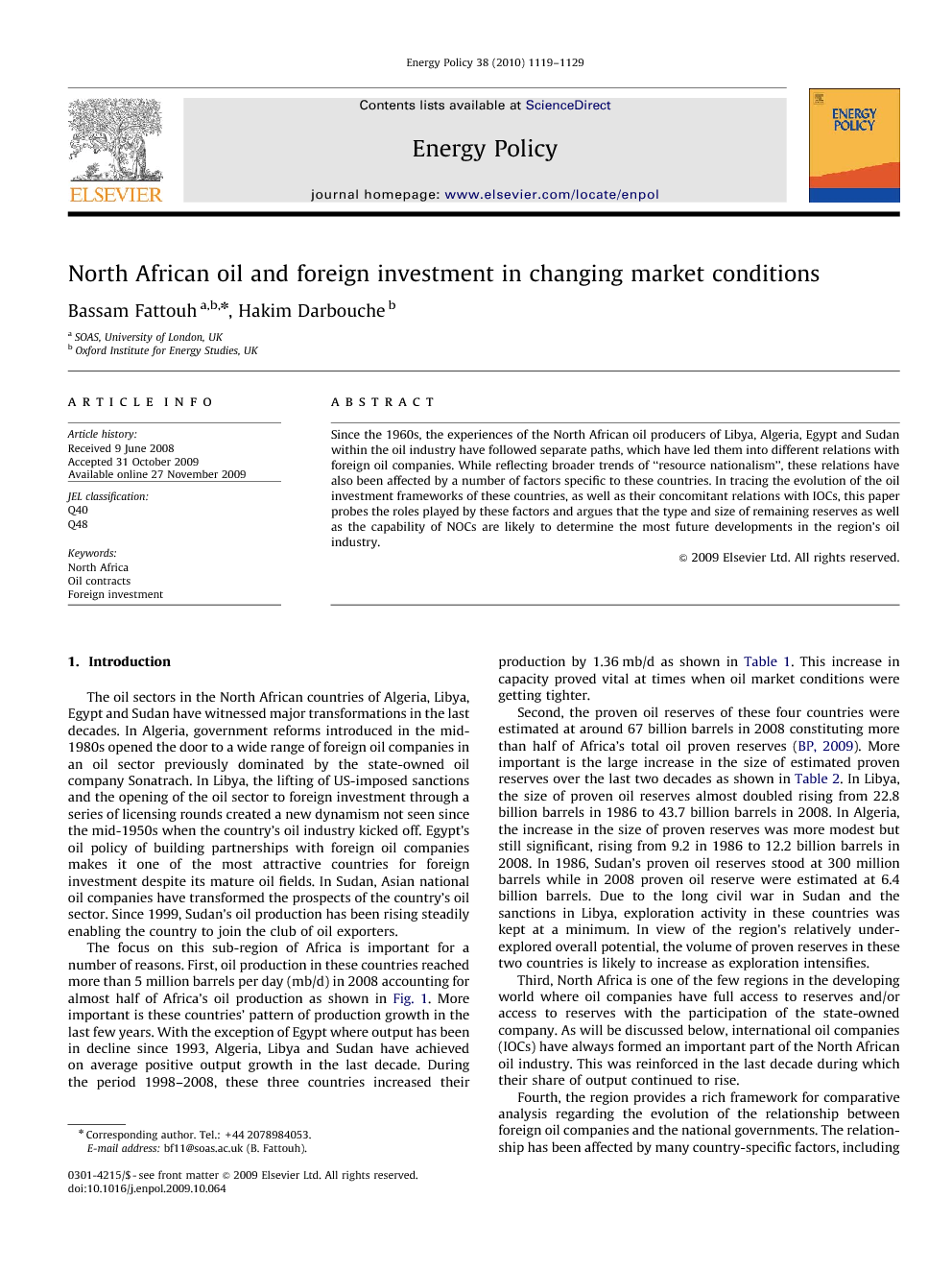 Since the 1960s, the experiences of the North African oil producers of Libya, Algeria, Egypt and Sudan within the oil industry have followed separate paths, which have led them into different relations with foreign oil companies. While reflecting broader trends of “resource nationalism”, these relations have also been affected by a number of factors specific to these countries. In tracing the evolution of the oil investment frameworks of these countries, as well as their concomitant relations with IOCs, this paper probes the roles played by these factors and argues that the type and size of remaining reserves as well as the capability of NOCs are likely to determine the most future developments in the region's oil industry.

This paper has reviewed the oil contracts and fiscal terms used by North African producers over the last few decades and traced the evolution of the relationship between their governments and IOCs. It has shown that despite ups and downs, deriving mainly from the region's resource nationalist propensities, IOCs have enjoyed relatively strong positions in the upstream segments of the region's oil industry. As a result, they have constituted an important factor of production in these countries, albeit to varying degrees and in different forms. The defining elements of these relationships have often related to the country-specific factors identified in this paper, but they have also reflected broader trends of “resources nationalism”, especially within the Middle East lato sensu and OPEC. In Libya, the unpredictability of the Qadhafi regime and the impact of international sanctions have had a defining impact on the country's relations with foreign, especially US, investors and concomitant production profile. In Algeria, the historical role played by Sonatrach in the management of national resources since its taking over of French assets in the 1970s and the characteristics of the country's hydrocarbon resources, as well as domestic politics, have invariably been influential in relation to the formulation of hydrocarbon laws and investment frameworks. Egypt, for its part, has been largely constrained by the size of its resources and the aptitude of its NOC. Finally, Sudan's relatively short hydrocarbon experience has been plagued by domestic political factionalism and poor international reputation. As the petro-political cycle (re-)entered its downside in September 2008, the resource assertiveness shown by North African producers since the early 2000s is likely to wane accordingly. However, as oil prices seem unlikely to fall below “reasonable” levels as was the case in the past, the relationship between governments and foreign investors is likely to remain subject to the respective capabilities of NOCs and the size of remaining reserves. The scarcity of reserves elsewhere will reduce the likelihood of sanctions in the region, as western governments will be unwilling to undermine their privileged relations with the regimes in place. The fact that the latter are unlikely to change any time soon, especially in the absence of outside pressure, will also mean that their impact on future relations with IOCs will remain constant. Governments in the region have also learnt how to deal with their western counterparts, and using resources for positive conditionality purposes is a tendency that will be reinforced in the future. Depending on the size of remaining reserves and the cost of their extraction, North African countries will remain dependent on foreign technology, which could only be alleviated by sophisticated NOCs.