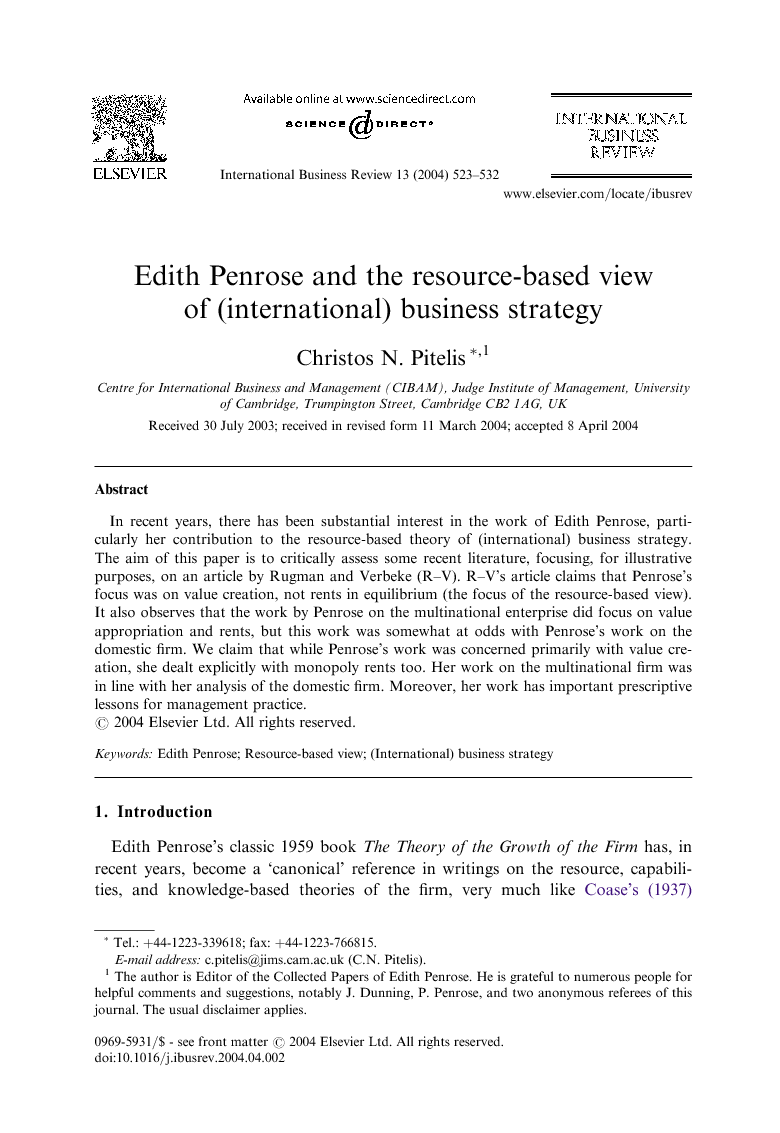 In recent years, there has been substantial interest in the work of Edith Penrose, particularly her contribution to the resource-based theory of (international) business strategy. The aim of this paper is to critically assess some recent literature, focusing, for illustrative purposes, on an article by Rugman and Verbeke (R–V). R–V’s article claims that Penrose’s focus was on value creation, not rents in equilibrium (the focus of the resource-based view). It also observes that the work by Penrose on the multinational enterprise did focus on value appropriation and rents, but this work was somewhat at odds with Penrose’s work on the domestic firm. We claim that while Penrose’s work was concerned primarily with value creation, she dealt explicitly with monopoly rents too. Her work on the multinational firm was in line with her analysis of the domestic firm. Moreover, her work has important prescriptive lessons for management practice.

Edith Penrose’s classic 1959 book The Theory of the Growth of the Firm has, in recent years, become a ‘canonical’ reference in writings on the resource, capabilities, and knowledge-based theories of the firm, very much like Coase’s (1937) contribution has been to the transaction costs theory. Unlike Coase, however, whose role as the father figure of the transaction costs theory has been undisputed, Penrose’s contribution to the resource-based theory has been the subject of recent discussion. Barney (2000), for example, claims that the early resource-based theory of the firm owes more to the work of Demsetz, 1973 and Demsetz, 1988 than to Penrose, while Kor and Mahoney, 2000 and Kor and Mahoney, 2004 question this claim. Both views are probably right in that some contributors like Barney (1991) himself had indeed not been influenced by Penrose (and they are the best to know this anyway) while others, notably Teece, 1980, Teece, 1982 and Wernerfelt, 1984, have drawn explicitly on and referred to Penrose, see Rugman and Verbeke (R–V) (2002) for more. A more recent debate to which R–V contribute deals with the question whether Penrose’s focus is in line with that of the resource-based view (RBV). For Foss (1999), while the RBV deals with rents in equilibrium, Penrose’s focus was on firm growth as a disequilibrium phenomenon. Similarly, R–V observe that Penrose’s intended focus was on value creation, not rents in equilibrium or value appropriation. When she dealt with rent appropriation, notably when dealing with the multinational enterprise (MNE) that was at odds with her theory of the domestic firm. Our claim is that Penrose dealt extensively with the issue of (monopoly) rents in equilibrium, notably in the latter part of her book, with arguments and ideas that anticipate strategic positioning theories of strategy, such as Michael Porter’s (1980). In addition, Penrose dealt with the hitherto little examined possibility of rents in disequilibrium, in terms of what she called ‘impregnable bases’. 2 Concerning the MNE, Penrose believed that there are no substantial reasons to have a special theory, save for the relative importance of national borders in shaping firm diversification strategies. Accordingly, she dealt neither with the issue of the ‘nature’ of the MNE, nor with the issue of the ‘mode of entry’. While such views may be put to the test, her views on the MNE and the political economy of MNEs–host countries relations is in line with her view that while the process of growth is efficient, the resultant state could be inefficient if firms try to exploit ‘monopolistic advantages’. Moreover, Penrose’s views on the objective, growth and functions of firms are more complex than allowed for by the analysis of R–V. In particular, Penrose’s views were distant from the idea that managers aimed at optimal growth as an explicit objective. 3 Penrose’s contribution is crucial for managerial practice. Her views point to long-term success through innovations, facilitated through big-business competition, and the pursuit of disequilibrium rents through the constant creation of ‘relatively impregnable bases’ and even (quasi-)equilibrium rents through monopolistic restrictions, see below. The rest of the paper is structured as follows. In Section II, we critically assess R–V’s claim that Penrose’s theory is about value creation. In Section III, we focus on the issue of the MNE and the objectives, growth and function of firms. In the final Section IV, we conclude and claim that Penrose’s ideas are topical and good for, managerial practice.