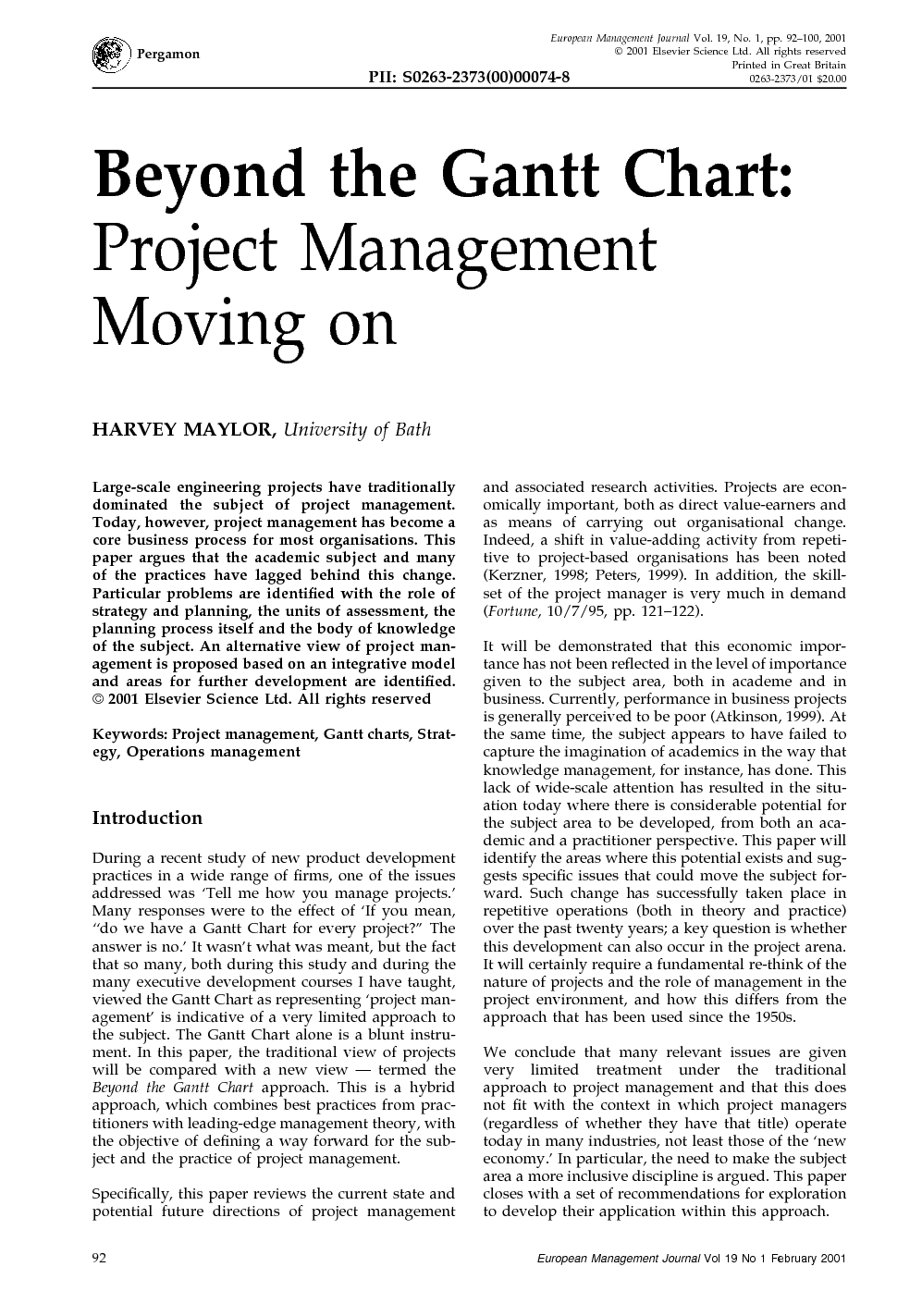 Large-scale engineering projects have traditionally dominated the subject of project management. Today, however, project management has become a core business process for most organisations. This paper argues that the academic subject and many of the practices have lagged this change. Particular problems are identified with the role of strategy and planning, the units of assessment, the planning process itself and the body of knowledge of the subject. An alternative view of project management is proposed based on an integrative model and areas for further development are identified.

During a recent study of new product development practices in a wide range of firms, one of the issues addressed was ‘Tell me how you manage projects.’ Many responses were to the effect of ‘If you mean, “do we have a Gantt Chart for every project?” The answer is no.’ It wasn't what was meant, but the fact that so many, both during this study and during the many executive development courses I have taught, viewed the Gantt Chart as representing ‘project management’ is indicative of a very limited approach to the subject. The Gantt Chart alone is a blunt instrument. In this paper, the traditional view of projects will be compared with a new view — termed the Beyond the Gantt Chart approach. This is a hybrid approach, which combines best practices from practitioners with leading-edge management theory, with the objective of defining a way forward for the subject and the practice of project management. Specifically, this paper reviews the current state and potential future directions of project management and associated research activities. Projects are economically important, both as direct value-earners and as means of carrying out organisational change. Indeed, a shift in value-adding activity from repetitive to project-based organisations has been noted (Kerzner, 1998 and Peters, 1999). In addition, the skill-set of the project manager is very much in demand (Fortune, 10/7/95, pp. 121–122). It will be demonstrated that this economic importance has not been reflected in the level of importance given to the subject area, both in academe and in business. Currently, performance in business projects is generally perceived to be poor (Atkinson, 1999). At the same time, the subject appears to have failed to capture the imagination of academics in the way that knowledge management, for instance, has done. This lack of wide-scale attention has resulted in the situation today where there is considerable potential for the subject area to be developed, from both an academic and a practitioner perspective. This paper will identify the areas where this potential exists and suggests specific issues that could move the subject forward. Such change has successfully taken place in repetitive operations (both in theory and practice) over the past twenty years; a key question is whether this development can also occur in the project arena. It will certainly require a fundamental re-think of the nature of projects and the role of management in the project environment, and how this differs from the approach that has been used since the 1950s. We conclude that many relevant issues are given very limited treatment under the traditional approach to project management and that this does not fit with the context in which project managers (regardless of whether they have that title) operate today in many industries, not least those of the ‘new economy.’ In particular, the need to make the subject area a more inclusive discipline is argued. This paper closes with a set of recommendations for exploration to develop their application within this approach. 1.1. Is there a problem? Whether there is a need for a new approach depends on establishing that there is indeed a problem with the existing approach. The existing or traditional approach is based on the computational planning and control models originating in large projects from the 1950s onwards, and used extensively by many traditional project industries, predominantly contractors to the aerospace, defence and large construction (Kerzner, 1998). The models are highly deterministic and based on techniques — notably PERT. Whilst these models have been refined significantly over the years, they are not considered useful by a large number of world-class organisations. For example, consider the approach taken by the Japanese automotive firms in their new product development projects and these methods and approaches are nowhere to be seen (e.g. Clark and Fujimoto, 1991). Whilst wholesale adoption of Japanese working practices is not being advocated here, the methods of Toyota (Sobek et al., 1998) in developing new vehicles in half the time of their western counterparts, are surely worthy of study, particularly when they are so different from more traditional project management. Given that many of the current business needs more closely resemble that of Toyota, operating in saturated, hyper-competitive fast-moving global markets rather than that of the cost-plus defence contractors of yore, it is only appropriate that project management be re-considered. Firms such as Hewlett Packard and Motorola have done so with their practices making the traditional approach look anachronistic. Clearly, practice has moved ahead of the body of knowledge in many respects. In addition to the project context having radically changed, there is even some doubt as to whether the traditional methods are effective in many sectors. Collins and Bicknell (1997) showed that problems with IT projects were perennial. In the construction sector, various reports have highlighted systemic problems with the methods of management in the industry (Egan, 1998). Indeed, one interviewee during this work commented that, ‘The only way we hit targets is if we continuously “adjust” the baseline.’ Shoot first and whatever you hit, call it the target. Given that project managers usually have an input to the original baselines, how these were constructed is surely a topic for investigation. There are clearly problems with the traditional approach. The next question is whether other areas may provide ideas for improvement.

Projects represent an economically important set of activities. In developing the argument for a forward move in the subject area, some underlying problems are identified with the universality of the traditional approach. High-performing firms, taking a radically different approach to strategy, assessment, planning and the subject of project management itself have solved many of these problems. These solutions have been synthesised into the Beyond the Gantt Chart approach. The comparisons between this approach and the traditional are summarised in Table 4.