عنوان انگلیسی
What’s in a name? What leads a firm to change its name and what the new name foreshadows
دانلود فوری مقاله + سفارش ترجمه 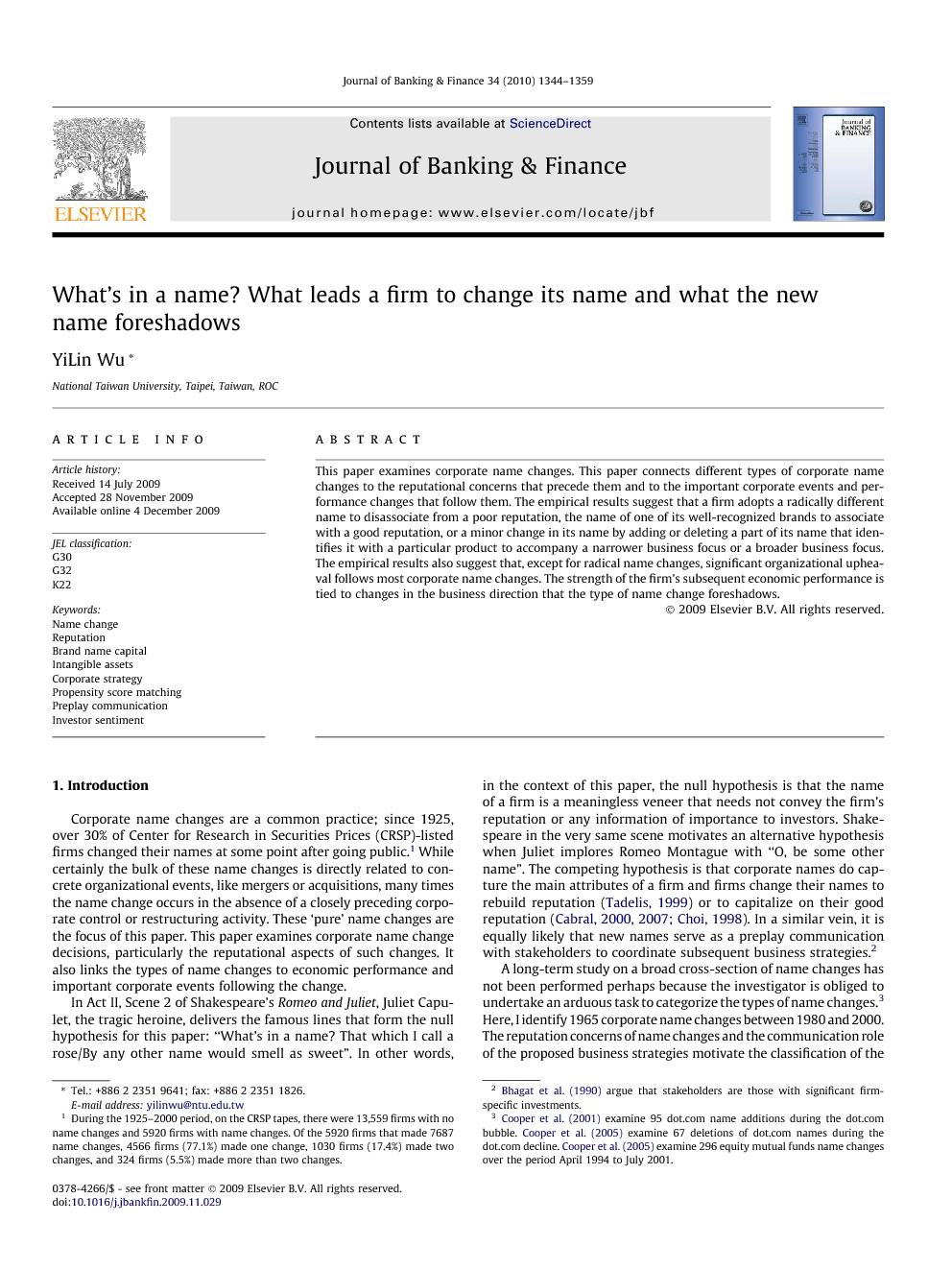 This paper examines corporate name changes. This paper connects different types of corporate name changes to the reputational concerns that precede them and to the important corporate events and performance changes that follow them. The empirical results suggest that a firm adopts a radically different name to disassociate from a poor reputation, the name of one of its well-recognized brands to associate with a good reputation, or a minor change in its name by adding or deleting a part of its name that identifies it with a particular product to accompany a narrower business focus or a broader business focus. The empirical results also suggest that, except for radical name changes, significant organizational upheaval follows most corporate name changes. The strength of the firm’s subsequent economic performance is tied to changes in the business direction that the type of name change foreshadows.

Corporate name changes are a common practice; since 1925, over 30% of Center for Research in Securities Prices (CRSP)-listed firms changed their names at some point after going public.1 While certainly the bulk of these name changes is directly related to concrete organizational events, like mergers or acquisitions, many times the name change occurs in the absence of a closely preceding corporate control or restructuring activity. These ‘pure’ name changes are the focus of this paper. This paper examines corporate name change decisions, particularly the reputational aspects of such changes. It also links the types of name changes to economic performance and important corporate events following the change. In Act II, Scene 2 of Shakespeare’s Romeo and Juliet, Juliet Capulet, the tragic heroine, delivers the famous lines that form the null hypothesis for this paper: “What’s in a name? That which I call a rose/By any other name would smell as sweet”. In other words, in the context of this paper, the null hypothesis is that the name of a firm is a meaningless veneer that needs not convey the firm’s reputation or any information of importance to investors. Shakespeare in the very same scene motivates an alternative hypothesis when Juliet implores Romeo Montague with “O, be some other name”. The competing hypothesis is that corporate names do capture the main attributes of a firm and firms change their names to rebuild reputation ( Tadelis, 1999) or to capitalize on their good reputation ( Cabral, 2000, Cabral, 2007 and Choi, 1998). In a similar vein, it is equally likely that new names serve as a preplay communication with stakeholders to coordinate subsequent business strategies. 2 A long-term study on a broad cross-section of name changes has not been performed perhaps because the investigator is obliged to undertake an arduous task to categorize the types of name changes.3 Here, I identify 1965 corporate name changes between 1980 and 2000. The reputation concerns of name changes and the communication role of the proposed business strategies motivate the classification of the types of name changes. In my sample of name changes, the most common type of name change (35.5%) is changing the name of the firm to that of a prominent brand, such as when Consolidated Foods became Sara Lee Corporation in 1985. Also common are minor name changes in which firms keep their identities but either shed a part of their names to broaden their perceived business focus (broader focus name changes (31.9%)) or add terms to their names to narrow their perceived business focus (narrower focus name changes (16.3%)). Examples of broader focus name changes and narrower focus name changes are, respectively, when Snap-On Tools became Snap On in 1994 and when Morrison Inc. became Morrison Restaurants Inc. in 1992. Less frequent are radical name changes (9.8%) in which the former and the new name bear no apparent semantic relation and the new name lacks association with the firm’s history, such as when Lincoln Bancorp became C U Bancorp in 1990.4 I expect that some major name changes occur because the firm wishes to change the perceptions of stakeholders after the firm’s reputation has deteriorated. Radical name changes typically fall into this category. I expect that other major name changes occur because the firm has a good reputation in a certain market and the firm seeks to leverage this good reputation across the firm as a whole. Adopting a brand name as the company name typically falls into this category. Empirical results are consistent with my hypothesis. Compared with radical name changes, brand name adoption is generally associated with a relatively good reputation, as reflected in better prior stock performance, better prior accounting performance, more neutral and favorable media coverage, and larger numbers of well-recognized brands. I expect that minor name changes occur as a preplay communication with stakeholders of coordinated restructuring of business portfolios. I expect firms changing their names to a narrower focus to make related asset acquisitions (including related acquisition of divisions and subsidiaries) and/or unrelated asset divestitures (including unrelated spin-offs and divestiture) to reflect the focusing (refocusing) of business strategies subsequent to the name changes. In contrast, I expect firms changing their names to a broader focus to make unrelated asset acquisitions and/or related asset divestitures to pursue a diversifying strategy. A number of key results emerge from the analysis in this paper. First, I document that the types of name changes have a bearing on short-term and long-term stock performance. Overall, I document that most name changes have positive and significant short-term announcement effects, while firms with radical name changes have negative stock responses over both short-term and longer horizons. Second, I document significant alterations in the firm’s future course of action following most corporate name changes, except for the radical type of name changes. Relative to firms with focus broadening name changes, those with focus-narrowing name changes seem to sell related assets less frequently but to sell unrelated assets more frequently following their name changes, suggesting that firms making narrower focus name changes are refocusing (or focusing) the scope of their businesses. Furthermore, a small-scale unrelated asset disposal program usually precedes the decision to do a focus-narrowing name change. Finally, I document that subsequent performance is better for firms with activities that are consistent with the message transmitted by new names than it is for other name-changing firms. For example, Tobin’s q and long-run excess returns are greater for firms with narrower focus name changes that refocus (or focus) their scope of business than for other narrower focus name-changing firms without refocusing activities. The remainder of this paper is organized as follows. Section 2 develops empirical predictions on what leads a firm to change its name and what the new name foreshows. Section 3 describes the dataset. Sections 4, 5 and 6 present the empirical results, and Section 7 concludes the paper.