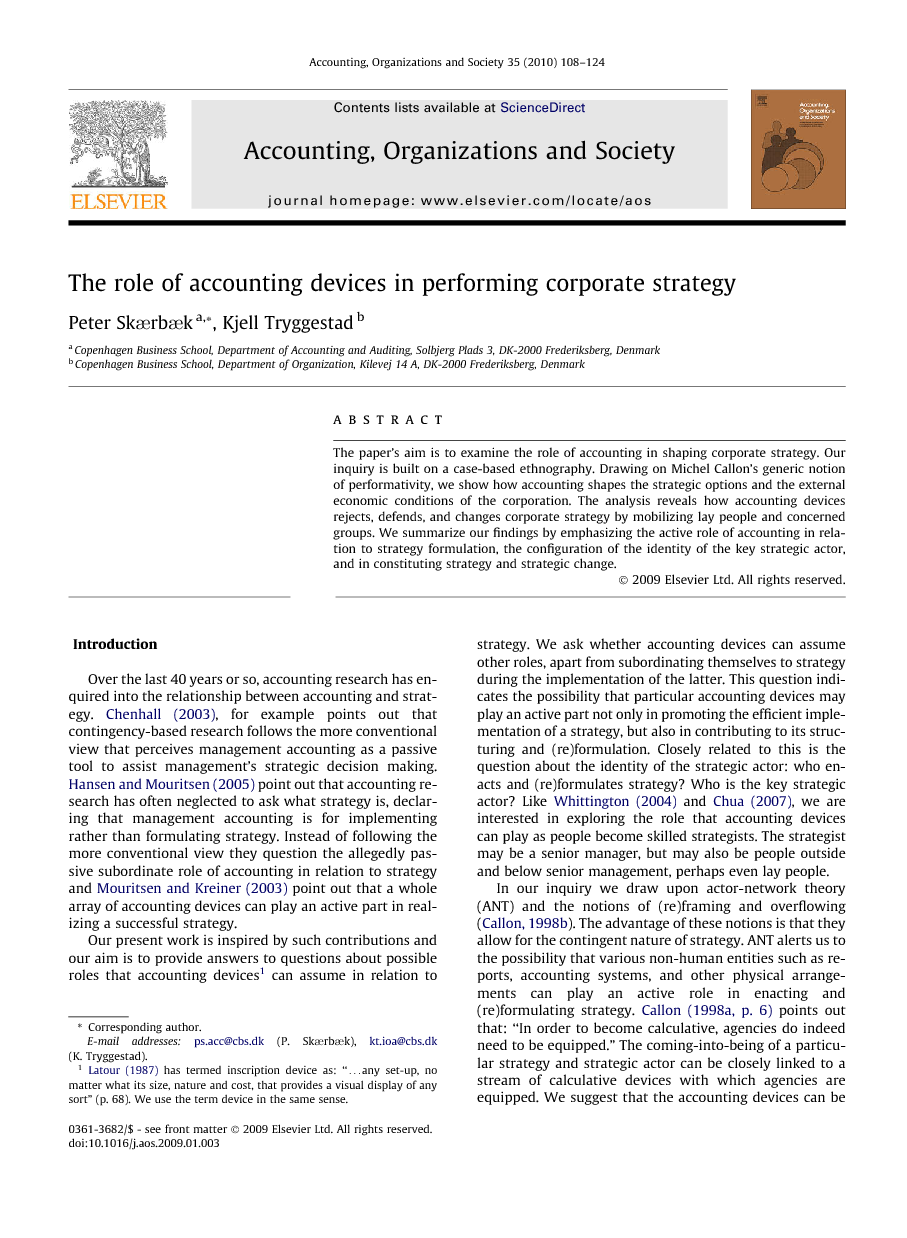 The paper’s aim is to examine the role of accounting in shaping corporate strategy. Our inquiry is built on a case-based ethnography. Drawing on Michel Callon’s generic notion of performativity, we show how accounting shapes the strategic options and the external economic conditions of the corporation. The analysis reveals how accounting devices rejects, defends, and changes corporate strategy by mobilizing lay people and concerned groups. We summarize our findings by emphasizing the active role of accounting in relation to strategy formulation, the configuration of the identity of the key strategic actor, and in constituting strategy and strategic change.

Over the last 40 years or so, accounting research has enquired into the relationship between accounting and strategy. Chenhall (2003), for example points out that contingency-based research follows the more conventional view that perceives management accounting as a passive tool to assist management’s strategic decision making. Hansen and Mouritsen (2005) point out that accounting research has often neglected to ask what strategy is, declaring that management accounting is for implementing rather than formulating strategy. Instead of following the more conventional view they question the allegedly passive subordinate role of accounting in relation to strategy and Mouritsen and Kreiner (2003) point out that a whole array of accounting devices can play an active part in realizing a successful strategy. Our present work is inspired by such contributions and our aim is to provide answers to questions about possible roles that accounting devices1 can assume in relation to strategy. We ask whether accounting devices can assume other roles, apart from subordinating themselves to strategy during the implementation of the latter. This question indicates the possibility that particular accounting devices may play an active part not only in promoting the efficient implementation of a strategy, but also in contributing to its structuring and (re)formulation. Closely related to this is the question about the identity of the strategic actor: who enacts and (re)formulates strategy? Who is the key strategic actor? Like Whittington (2004) and Chua (2007), we are interested in exploring the role that accounting devices can play as people become skilled strategists. The strategist may be a senior manager, but may also be people outside and below senior management, perhaps even lay people. In our inquiry we draw upon actor-network theory (ANT) and the notions of (re)framing and overflowing (Callon, 1998b). The advantage of these notions is that they allow for the contingent nature of strategy. ANT alerts us to the possibility that various non-human entities such as reports, accounting systems, and other physical arrangements can play an active role in enacting and (re)formulating strategy. Callon (1998a, p. 6) points out that: “In order to become calculative, agencies do indeed need to be equipped.” The coming-into-being of a particular strategy and strategic actor can be closely linked to a stream of calculative devices with which agencies are equipped. We suggest that the accounting devices can be active in (re)formulating strategy. The question of ‘who’ is the strategic actor can be extended to mean ‘who orwhat’ to allow more explicitly for the possibility that a stream of accounting devices can play a complex part in enacting and (re)formulating strategy. This means that the important question of what strategy is can be extended to include the very nature of the components of strategy and strategic change. We thus ask about what constitutes strategy and strategic change? Our proposition is that they both may be constituted by a whole array of accounting devices. In this paper we use a case-based field study to consider our proposition regarding the active role of accounting devices in enacting and (re)formulating strategy. In addition to asking if this proposition is sound, we examine the timing and location of linkages between accounting devices and strategy and how they may also evolve and change. Our empirical focus is on a company that was facing major changes in its external environment and market. Thus, in our study we trace a chain of events connected with matters such as cost rationalizations, capital investments, and new competition. The company studied is the Ferry Division (since 1995 known as Scandlines) of the Danish government-owned railway company DSB. The paper is organized as follows. Section “accounting and strategy – a review of the literature” next discusses the relationship between accounting and strategy in light of previous research and presents the notions of (re)framing and overflowing that are used in analyzing the case. However, before applying these notions we describe our case-based method (Section “method and research site”). Then, in Sections “the main events of the case and the analysis”, “the framing and overflowing of an adaptation strategy”, “the emergence of concerned groups”, and “reframing strategy” we present the analysis of the roles of accounting devices in connection with the strategy and strategic change in the Scandlines case. Finally, in Section “concluding discussion” we provide a summary of our findings and discuss the implications for theory and future research. In particular we emphasize the findings concerning the performative role of accounting in relation to: (1) strategy formulation, (2) the identity of the key strategic actor, and (3) the constitution of strategy and strategic change.

The literature on the relation between accounting and strategy has undergone something of a revival over the last few years, encouraged by case studies which have generated new questions and concerns, and new theoretical approaches. This paper contributes to this literature through developing a better grasp of the performative role of accounting in relation to; (1) strategy formulation; (2) the identity of the key strategic actor; and, (3) the constitution of strategy and strategic change. After concluding on these issues and their interrelated implications, we end the paper by pointing out some further implications for research. The performative role of accounting in strategy formulation In our analysis, the strategy of adaptation performed successfully in that it framed capital investments in a precise way by preventing them. It was dependent on the payback device in performing this effect. Like Briers and Chua (2001), we do not just state that the accounting device is adopted and adapted to fit strategy in a subordinate role. Rather, our findings suggest the opposite possibility, namely that the strategy adopted (in our case referred to as ‘development – not liquidation’), is successively adapted to and mutually constituted by the accounting device. In practice, the strategy came to resemble the passive option that emphasized organizational adaptation to a constraining ‘outside’. Dent (1990) pointed out the constraining effect of ROI, and Roberts (1990) on the implementation of strategy made the same point about accounting more generally. Supplementary to their observations is the reverse process whereby accounting not only constrained or hampered the implementation of a corporate strategy, but simultaneously participated in its actual (re)formulation. The ‘outside’ constraints, to which the corporation had to adapt, emerge and are co-produced (endogenously) in interaction with the accounting devices.17 We agree with Chapman, 2005, Hansen and Mouritsen, 2005 and Smith, 2003 and others that the limited and subordinate role of accounting vis-á-vis strategy needs to be questioned. Accounting is an integral part of framing strategy, that is to say the accounting devices become strategic in a role of (re)formulating strategic ends and rationales, rather than being limited to implementation. The devices did more than framing strategy in an adaptive way. The adaptive frame of the corporate strategy simultaneously established the conditions for overflowing from which an expansive strategy of capital investments and growth could emerge and be executed. The important point is that the successful adaptive framing paves the way for more or different overflowing. The strategy of adaptation overflows, not because it does not perform, but because it does.18 To ‘adopt’ a strategy (Quattrone & Hopper, 2005) – does that simply mean that accounting follows a strategy by adapting to it. To adopt a strategy means to adapt it, and accounting is active in both adopting and adapting strategy. The process of adaptation is a mutual one and involves a double movement of framing and overflowing: far from containing the officers´ emerging concerns about the strategic future of the company, the successive refinement and reinforcement of the strategic frame of adaptation only added to their concerns. Conflict and concern escalated beyond the confined frame of adaptive strategy. The process of reframing a strategy of adaptation towards one that emphasizes capital investments and growth is not a final step. Rather, it is a temporary (and negotiated) achievement involving a stream of interdependent accounting devices. For example, the IPO was dependent upon the company identity, without which the IPO could not be launched. The company cannot exist without independent accounts such as the balance sheet and the annual report. The IPO cannot represent a possibility for strategy without these links to the other devices. The balance sheet and the government budget are also dependent upon one another. These two devices participate in negotiating the strategic options to the benefit of an expansive capital investment program. The negotiated and temporal nature of strategy can also be seen as a case of tension between exploitation and exploration (March, 1999). Exploitation, exploration and learning are closely related. The IPO device in our case can be regarded as a learning machine (Abernethy and Brownell, 1999 and Burchell et al., 1980) that not only can facilitate the efficient implementation and exploitation of strategy, but also its further experimentation and exploration. Although an IPO was not launched, the IPO device is productive in exploring the possibilities of an active strategy and what is ‘outside’/’inside’ strategic discretion and intervention.