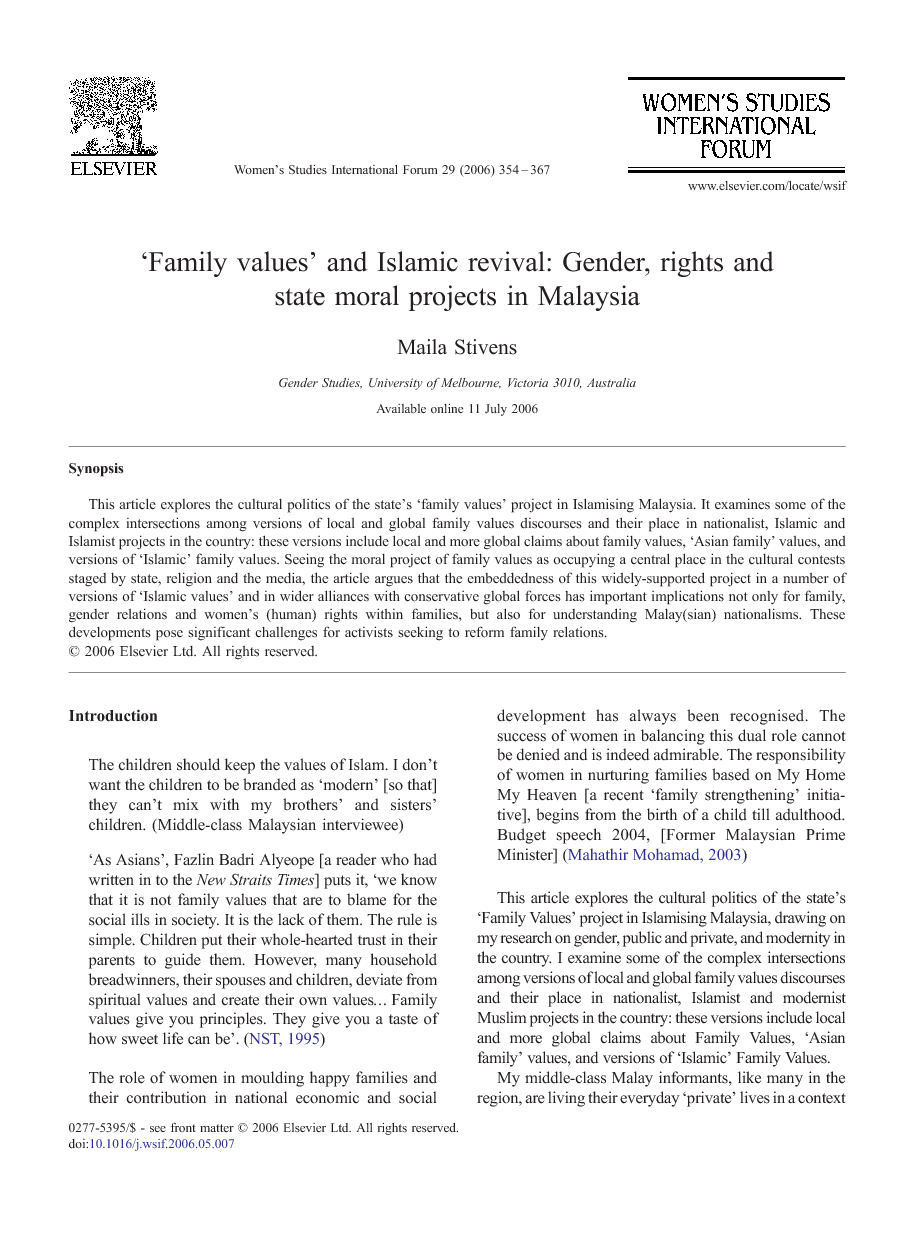 This article explores the cultural politics of the state's ‘family values’ project in Islamising Malaysia. It examines some of the complex intersections among versions of local and global family values discourses and their place in nationalist, Islamic and Islamist projects in the country: these versions include local and more global claims about family values, ‘Asian family’ values, and versions of ‘Islamic’ family values. Seeing the moral project of family values as occupying a central place in the cultural contests staged by state, religion and the media, the article argues that the embeddedness of this widely-supported project in a number of versions of ‘Islamic values’ and in wider alliances with conservative global forces has important implications not only for family, gender relations and women's (human) rights within families, but also for understanding Malay(sian) nationalisms. These developments pose significant challenges for activists seeking to reform family relations.

The children should keep the values of Islam. I don't want the children to be branded as ‘modern’ [so that] they can't mix with my brothers' and sisters’ children. (Middle-class Malaysian interviewee) ‘As Asians’, Fazlin Badri Alyeope [a reader who had written in to the New Straits Times] puts it, ‘we know that it is not family values that are to blame for the social ills in society. It is the lack of them. The rule is simple. Children put their whole-hearted trust in their parents to guide them. However, many household breadwinners, their spouses and children, deviate from spiritual values and create their own values… Family values give you principles. They give you a taste of how sweet life can be'. (NST, 1995) The role of women in moulding happy families and their contribution in national economic and social development has always been recognised. The success of women in balancing this dual role cannot be denied and is indeed admirable. The responsibility of women in nurturing families based on My Home My Heaven [a recent ‘family strengthening’ initiative], begins from the birth of a child till adulthood. Budget speech 2004, [Former Malaysian Prime Minister] (Mahathir Mohamad, 2003) This article explores the cultural politics of the state's ‘Family Values’ project in Islamising Malaysia, drawing on my research on gender, public and private, and modernity in the country. I examine some of the complex intersections among versions of local and global family values discourses and their place in nationalist, Islamist and modernist Muslim projects in the country: these versions include local and more global claims about Family Values, ‘Asian family’ values, and versions of ‘Islamic’ Family Values. My middle-class Malay informants, like many in the region, are living their everyday ‘private’ lives in a context where the ‘family’ and the domestic sphere are highly politicised, the ‘Muslim family’ especially so: the moral project of Family Values has assumed a central place in many of the cultural contests staged by state, religion and the media. Apocalyptic discourses of family crisis are omnipresent: a multitude of concerns are aired about families and marriages in trouble, divorce, children born out of wedlock, youthful sloth, sexualities, crime and child abuse (see Mahathir bin Mohamad & Ishihara, 1995). Family values discourses operate with a highly reified and overdetermined category of ‘family’. Yet in many of these discourses, the idea of the ‘family’ is oddly indeterminate, vague and insubstantial: perhaps all mythologies are necessarily and intentionally thus. As I suggest, Malaysian versions of family values are also manifestly part of larger global structures of meaning, from which they draw further power: the state has forged some highly significant global alliances with conservative religious forces, including the Christian right, in order to promote ‘family values’ and further ‘strengthen’ families. I argue that the embeddedness of this state moral project in a number of versions of ‘Islamic values’ and in wider alliances has important implications not only for understanding family and gender relations, but also for understanding Malay(sian) nationalisms and their increasingly global contexts. The article ends with some key questions: How much popular/populist support does this moral project have? And what challenges does such support pose for those working for women's (human) rights within families?

Writers on Islam and gender have pointed to how, in recent years in a number of ‘Muslim’ countries, issues of women, gender, family and household, women's bodies and sexualities have become major sites of cultural contest around the state's stance towards modernity, the nation's place in the world and Islamism's project of moral renewal in a late-modern/postmodern world. Such issues have often been part of larger sites of contestation, both as sites of direct concern and as metaphors for debating wider cultural concerns about such issues as the desirability of changes brought by modernity. It will be clear that Family Values discourse in the Malaysian context, extensively orchestrated by the government, has operated as just such a multi-layered structure of meaning. I have described some of the state propaganda campaigns and the government's active cooperation with conservative religious voices both within the country and internationally. Such activity can be understood as an exercise in authoritarian family governmentality. The embeddedness of this state moral project in a number of versions of ‘Islamic values’ and in wider alliances clearly has important implications not only for family and gender relations, but also for understanding Malay(sian) nationalisms. Does the growing emphasis on Family Values speak to what Case (2000) has seen as a shift from appeals to ethnic nationalism to patriotic nationalism, with Family Values as a unified and unifying national metaphor? It will also be apparent that at the same time there is a significant level of support for family values in all their different forms within society at large. If we assume that the interview households were representative, we can see some of the strength of this support among, for example, the new Malay middle classes. Some informants might be judged to have been ‘playing safe’ with an interviewer by directly echoing some of the more conservative government and Islamic ideology about ‘morals’ and family, but becoming modern was clearly a moral project for a significant section. ‘Family’ was at the core of this project, with Islamic values and family values often collapsed within their narratives. Such support links in complex ways both to the wider popular commitment to ideas of ‘family’ in Malaysia and to the attempted state orchestration of this support. This support has on occasion been clearly enmeshed in diverse Islamic and Islamist projects. These have included both state-driven and more dissident versions looking to social reform and justice, for example as part of Reformasi. It will be apparent that some support for ideas of Family Values/Islamic values/the Asian family in the Malaysian context can have distinct if not overt postcolonial resonances: Islamic discourse can act as a powerful site of and vehicle for forms of social protest (cf Kessler, 1978). It is arguable that such values can offer not only a refuge—the ‘haven in the heartless world’—but also provide a form of protest against the alienation and stresses of such new orders. As such, they both pose formidable challenges to those working for change in family relations. Such would-be reformers confront deeply entrenched attachments to ideas of ‘family’ which normalise the everyday oppressions of women within housezholds and wider family networks. At the same time the postcolonial ethnonationalist protest embedded in versions of family values make critiques of ‘family’ peculiarly problematic: attempts to reshape family relations and laws do not simply threaten the gender order, they also threaten to undo religion, race and nation. But ‘family values’ may nonetheless offer spaces for working for such change. Groups like Sisters in Islam show well how careful campaigns can use local understandings of family to build important new political spaces.