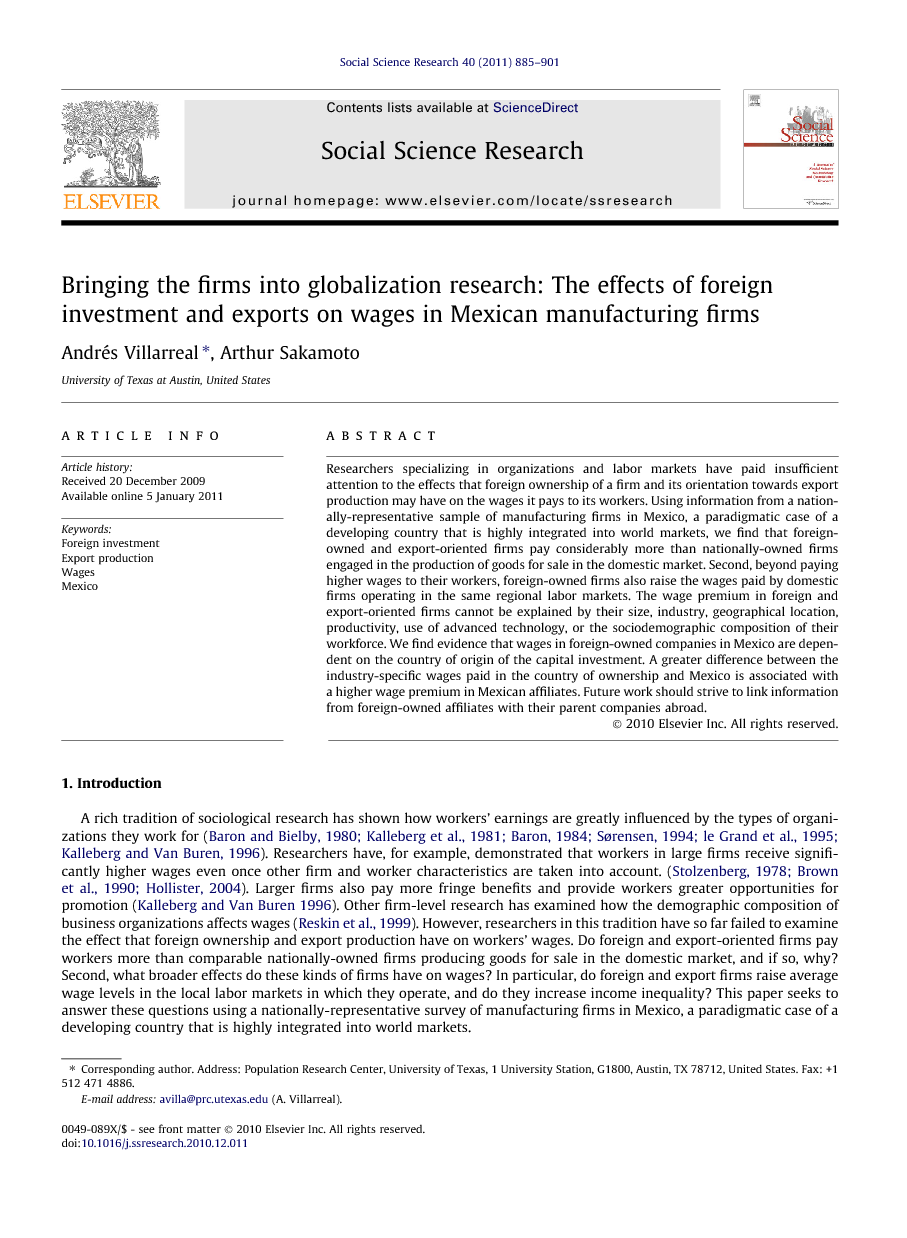 Researchers specializing in organizations and labor markets have paid insufficient attention to the effects that foreign ownership of a firm and its orientation towards export production may have on the wages it pays to its workers. Using information from a nationally-representative sample of manufacturing firms in Mexico, a paradigmatic case of a developing country that is highly integrated into world markets, we find that foreign-owned and export-oriented firms pay considerably more than nationally-owned firms engaged in the production of goods for sale in the domestic market. Second, beyond paying higher wages to their workers, foreign-owned firms also raise the wages paid by domestic firms operating in the same regional labor markets. The wage premium in foreign and export-oriented firms cannot be explained by their size, industry, geographical location, productivity, use of advanced technology, or the sociodemographic composition of their workforce. We find evidence that wages in foreign-owned companies in Mexico are dependent on the country of origin of the capital investment. A greater difference between the industry-specific wages paid in the country of ownership and Mexico is associated with a higher wage premium in Mexican affiliates. Future work should strive to link information from foreign-owned affiliates with their parent companies abroad

A rich tradition of sociological research has shown how workers’ earnings are greatly influenced by the types of organizations they work for (Baron and Bielby, 1980, Kalleberg et al., 1981, Baron, 1984, Sørensen, 1994, le Grand et al., 1995 and Kalleberg and van Buren, 1996). Researchers have, for example, demonstrated that workers in large firms receive significantly higher wages even once other firm and worker characteristics are taken into account. (Stolzenberg, 1978, Brown et al., 1990 and Hollister, 2004). Larger firms also pay more fringe benefits and provide workers greater opportunities for promotion (Kalleberg and Van Buren 1996). Other firm-level research has examined how the demographic composition of business organizations affects wages (Reskin et al., 1999). However, researchers in this tradition have so far failed to examine the effect that foreign ownership and export production have on workers’ wages. Do foreign and export-oriented firms pay workers more than comparable nationally-owned firms producing goods for sale in the domestic market, and if so, why? Second, what broader effects do these kinds of firms have on wages? In particular, do foreign and export firms raise average wage levels in the local labor markets in which they operate, and do they increase income inequality? This paper seeks to answer these questions using a nationally-representative survey of manufacturing firms in Mexico, a paradigmatic case of a developing country that is highly integrated into world markets. Whether multinational companies operating in developing countries pay higher wages than domestic firms and whether they help raise wages more generally is particularly important given the dramatic increase in foreign capital flows and international trade worldwide. Our objective is therefore to “bring the firms in” to globalization research. The labor market approach we propose has the advantage of empirically grounding the globalization debate which has often been carried out in very broad, generalized terms. At the same time, our analysis also seeks to inform labor market research by demonstrating how foreign ownership of a firm and its focus on export production are important predictors of wages. While sociologists have been slow to recognize the importance of factors such as foreign investment on firm-level outcomes, a strand of economic research has found that workers employed in foreign-owned firms receive higher wages, not only in developing countries such as Mexico, but in developed ones as well (Buckley and Enderwick, 1983, Wilmore, 1986, Aitken et al., 1996 and Lipsey and Sjöholm, 2001). Yet this difference in wages between foreign and domestic firms has not been adequately explained by traditional economic approaches which attribute the higher wages in foreign firms to higher productivity. One reason economists are preoccupied with the higher wages paid by foreign and export-oriented firms is that they appear to challenge standard economic theories. If markets are indeed the driving force behind wages there is no obvious reason why the nationality of ownership or the destination of sales should matter. Why should a multinational firm moving its operations abroad pay above-market wages in its new country of operation? As we will demonstrate below, factors commonly used by economists to explain higher wages such as a firm’s productivity level, are insufficient to explain the wage premium in foreign and export firms. This wage premium therefore presents an opportunity for sociologists specializing in organizations and labor markets to make a significant contribution. A disparity in wages between foreign and nationally-owned firms and between those that are engaged in export and non-export production might also suggest one way in which economic globalization increases inequality in developing countries, especially if the relative payoffs to employment in the foreign and export sectors are greater for higher occupational groups. In the analysis below we will therefore examine the wage premium paid by foreign-owned and export firms to workers in different occupational levels. Finally, if the presence of foreign firms increases the wages paid by other companies operating in the same regional labor markets, then foreign investment may also contribute to a disparity in income between regions receiving large amounts of foreign investment, such as Mexico’s northern border, and other parts of the country. In the final part of our paper we will therefore test whether foreign firms have a positive spillover effect on the wages paid by other companies. Because of the remarkable economic transformation that Mexico has undergone over the past two decades from a relatively protected economy to one open to external trade and foreign investment, Mexico constitutes an important case to investigate the effects of economic globalization on workers’ wages. Indeed, few developing countries have become so thoroughly integrated into the world economy. As of 2003, Mexico had signed 11 free trade agreements with 32 countries in addition to being a founding member of the World Trade Organization (López-Córdova, 2003). The country experienced a particularly dramatic increase in international trade following the enactment of the North American Free Trade Agreement (NAFTA) in 1994. The agreement reduced tariffs on trade with the United States and Canada, forming the second largest trading bloc in the world. Fueled in part by NAFTA as well as by government policies lifting restrictions on foreign participation in the economy, foreign investment in the Mexican manufacturing sector rose considerably during the 1980s and 1990s, especially in the in-bond industries known as maquiladoras. 1

Our analysis has demonstrated that foreign investment and export production have a positive effect on wages in Mexico: Not only do foreign and export-oriented firms pay workers significantly more than other firms even after controlling for other relevant firm and worker characteristics, but they also appear to raise regional wage levels.15 It might at first seem difficult to reconcile these positive effects of foreign and export firms on workers’ wages in Mexico with the harmful effects of foreign investment and export production found by researchers using cross-national research methods. Over the past two decades, researchers in the dependency theory tradition and many others have found foreign direct investment and export production to be associated with increasing levels of inequality at the national level (Bornschier and Chase-Dunn, 1985 and Alderson and Nielsen, 1999). However, the results of our statistical analysis are actually consistent with those of researchers using cross-national research methods. As we noted earlier, foreign firms may increase income inequality even while they raise wages. They may increase inequality in three different ways: First, by paying higher wages, foreign firms create a gap between workers employed in the foreign and domestic sectors. Second, our analysis further revealed higher wage premiums for workers in higher occupational groups. By raising the wages of white-collar workers and managers more than those of blue-collar workers, foreign firms may therefore be worsening an already unequal income distribution. Finally, the results of our spillover models suggest that workers in regions of the country with a greater presence of foreign investment receive higher wages. Since foreign firms are more likely to operate in certain states such as those located near the US border, foreign investment flows may also be increasing inequality across regions. All these findings are highly suggestive of a positive association between foreign investment and income inequality in Mexico. However, a proper test of the effect that foreign firms have on the income distribution requires more detailed information than currently available in our surveys. Our study does, however, demonstrate that foreign investment may simultaneously raise average wage levels and increase inequality, thereby reconciling findings from previous studies. At a theoretical level, our paper has attempted to show how sociological research on labor markets can be brought to bear on the debate about the effects of globalization, and how globalization research can in turn inform labor market theory. The labor market approach we are proposing has the advantage of empirically grounding the globalization debate which has often been carried out in very broad, generalized terms. Labor market theory allows us to specify the micro-level mechanisms through which foreign investment and export production may affect workers’ lives. Our analysis may therefore be seen as an attempt to “bring the firms in” to globalization research. Globalization research in turn has the potential to advance labor market theory by highlighting the importance of international factors in the determination of wages. Specialists on labor markets and organizations have so far mostly ignored the effect that foreign ownership of a firm and its focus on export production may have on workers’ wages. Yet our analysis has shown that they have a strong, independent effect. Future work should strive to better understand why that is. Many of the hypotheses derived from well-established labor market theories failed to explain the higher wages paid by foreign and export-oriented firms. Factors such as the size of firms, their location, industry, productivity and use of advanced technologies did not fully account for the wage premium. Instead, our analysis suggests that wages in foreign-owned affiliates are tied to the conditions in the parent companies abroad. Data limitations prevented us from properly testing the effect of profit sharing between parent companies in other countries and workers in Mexican affiliates. However, our finding that the wage premium in foreign-owned manufacturing firms is proportional to the industry-specific wage differential between the country of origin of the capital investment and Mexico is consistent with findings from studies by Budd et al., 2005 and Budd and Slaughter, 2004, that find more direct evidence of profit sharing across borders. Of course, the evidence for profit sharing is only suggestive. More research is required into the finances and operations of multinational companies in order to corroborate that savings on labor costs are indeed passed onto workers in foreign affiliates. In particular, financial information from both parent companies and foreign affiliates would be required to further test this hypothesis and rule out competing explanations. As firms’ operations increasingly span more than one country it is essential that sociological analysis of firms do the same. So far, economists have taken the lead in analyzing the effects of foreign investment and export production at the firm level. Economic research has made important contributions to our knowledge of the wages paid by multinational firms. However, economists have focused on a limited set of explanatory factors. In particular, they have emphasized the importance of productivity differences in explaining the wage premium paid by foreign and export-oriented firms. Our analysis has shown that productivity differences are insufficient to explain the wage disparity. Instead, the higher wages paid by foreign and export-oriented firms involve processes that are beyond standard economic theory, and for which sociological research is especially well-suited. A rich tradition of sociological work has already shown how workers’ earnings are greatly influenced by the types of organizations they work for. By applying and extending the insights from these earlier works sociologists may disentangle how global phenomena such as international investment and trade flows affect the lives of workers worldwide.