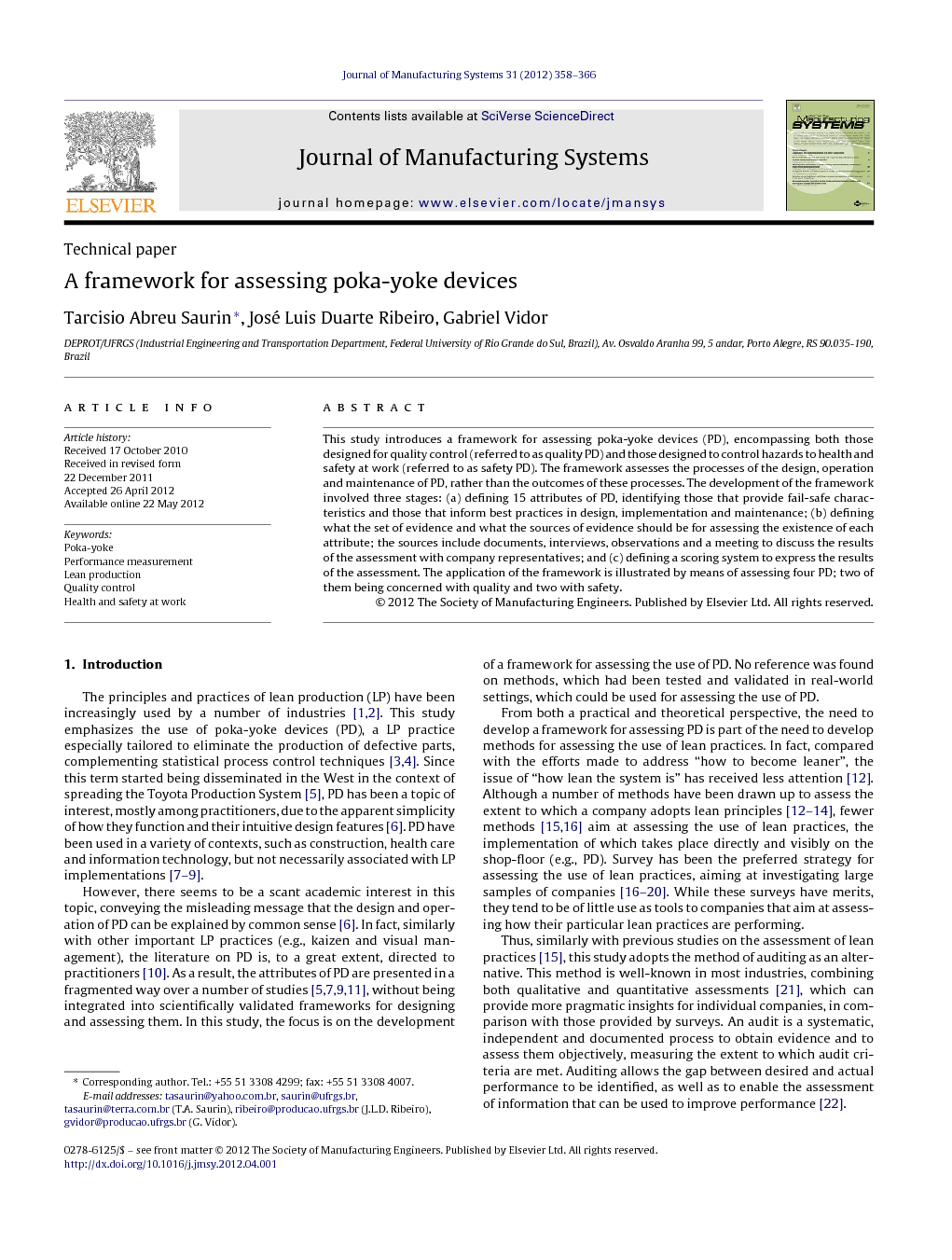 This study introduces a framework for assessing poka-yoke devices (PD), encompassing both those designed for quality control (referred to as quality PD) and those designed to control hazards to health and safety at work (referred to as safety PD). The framework assesses the processes of the design, operation and maintenance of PD, rather than the outcomes of these processes. The development of the framework involved three stages: (a) defining 15 attributes of PD, identifying those that provide fail-safe characteristics and those that inform best practices in design, implementation and maintenance; (b) defining what the set of evidence and what the sources of evidence should be for assessing the existence of each attribute; the sources include documents, interviews, observations and a meeting to discuss the results of the assessment with company representatives; and (c) defining a scoring system to express the results of the assessment. The application of the framework is illustrated by means of assessing four PD; two of them being concerned with quality and two with safety.

The principles and practices of lean production (LP) have been increasingly used by a number of industries [1] and [2]. This study emphasizes the use of poka-yoke devices (PD), a LP practice especially tailored to eliminate the production of defective parts, complementing statistical process control techniques [3] and [4]. Since this term started being disseminated in the West in the context of spreading the Toyota Production System [5], PD has been a topic of interest, mostly among practitioners, due to the apparent simplicity of how they function and their intuitive design features [6]. PD have been used in a variety of contexts, such as construction, health care and information technology, but not necessarily associated with LP implementations [7], [8] and [9]. However, there seems to be a scant academic interest in this topic, conveying the misleading message that the design and operation of PD can be explained by common sense [6]. In fact, similarly with other important LP practices (e.g., kaizen and visual management), the literature on PD is, to a great extent, directed to practitioners [10]. As a result, the attributes of PD are presented in a fragmented way over a number of studies [5], [7], [9] and [11], without being integrated into scientifically validated frameworks for designing and assessing them. In this study, the focus is on the development of a framework for assessing the use of PD. No reference was found on methods, which had been tested and validated in real-world settings, which could be used for assessing the use of PD. From both a practical and theoretical perspective, the need to develop a framework for assessing PD is part of the need to develop methods for assessing the use of lean practices. In fact, compared with the efforts made to address “how to become leaner”, the issue of “how lean the system is” has received less attention [12]. Although a number of methods have been drawn up to assess the extent to which a company adopts lean principles [12], [13] and [14], fewer methods [15] and [16] aim at assessing the use of lean practices, the implementation of which takes place directly and visibly on the shop-floor (e.g., PD). Survey has been the preferred strategy for assessing the use of lean practices, aiming at investigating large samples of companies [16], [17], [18], [19] and [20]. While these surveys have merits, they tend to be of little use as tools to companies that aim at assessing how their particular lean practices are performing. Thus, similarly with previous studies on the assessment of lean practices [15], this study adopts the method of auditing as an alternative. This method is well-known in most industries, combining both qualitative and quantitative assessments [21], which can provide more pragmatic insights for individual companies, in comparison with those provided by surveys. An audit is a systematic, independent and documented process to obtain evidence and to assess them objectively, measuring the extent to which audit criteria are met. Auditing allows the gap between desired and actual performance to be identified, as well as to enable the assessment of information that can be used to improve performance [22]. The attributes encompassed by the framework proposed by this article are applicable both to PD designed for quality control and to those designed to control hazards to health and safety at work (H&S). This integrative perspective between quality and H&S might be considered as a distinctive feature of the proposed framework, as both companies and the academic literature usually deal with each type of PD separately. According to Stewart and Grout [6], this is due to the fact that, typically, researchers and practitioners devoted to quality control have little technical knowledge of H&S, and vice versa. The application of the framework is exemplified by means of applying it so as to analyze four PD: two of which are concerned with quality and the other two with safety.