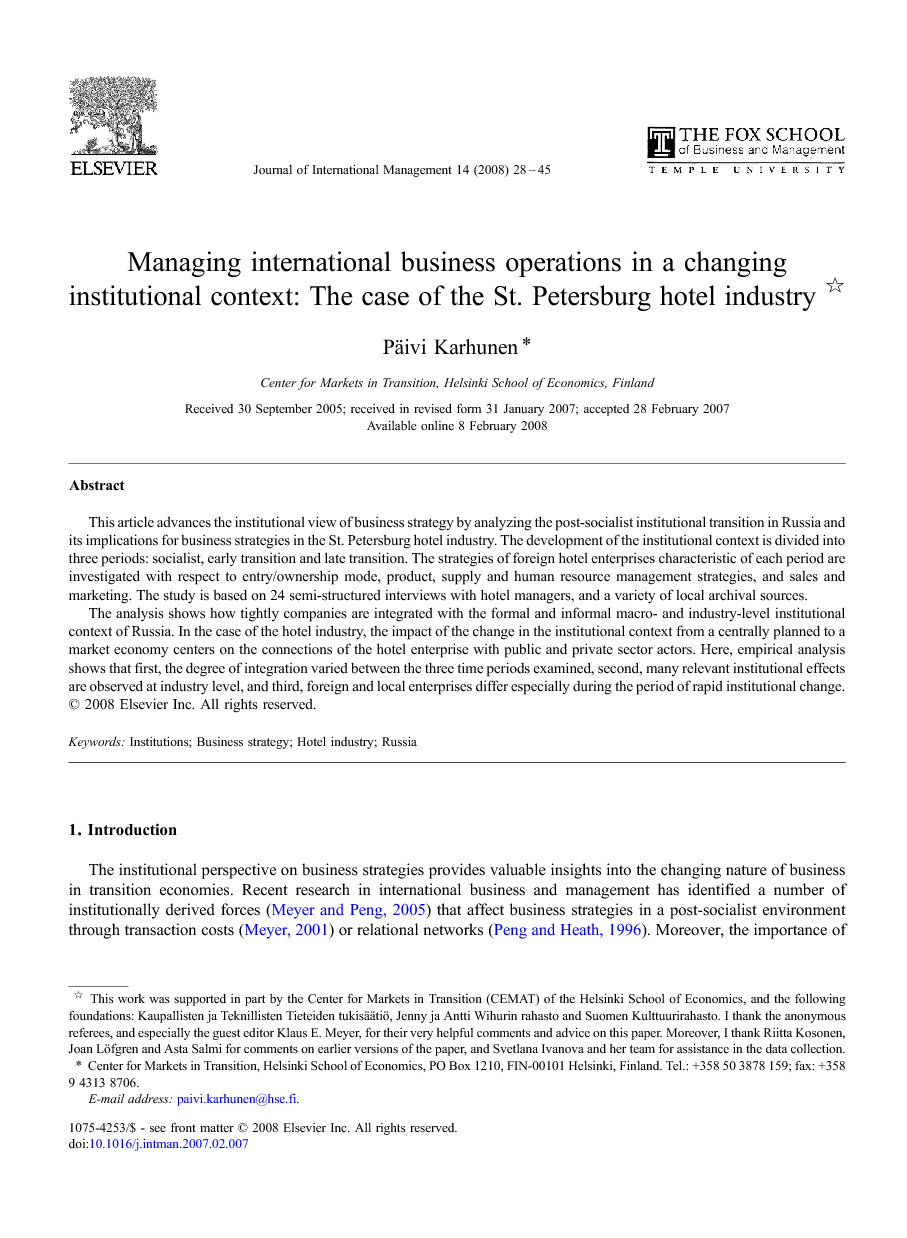 This article advances the institutional view of business strategy by analyzing the post-socialist institutional transition in Russia and its implications for business strategies in the St. Petersburg hotel industry. The development of the institutional context is divided into three periods: socialist, early transition and late transition. The strategies of foreign hotel enterprises characteristic of each period are investigated with respect to entry/ownership mode, product, supply and human resource management strategies, and sales and marketing. The study is based on 24 semi-structured interviews with hotel managers, and a variety of local archival sources. The analysis shows how tightly companies are integrated with the formal and informal macro- and industry-level institutional context of Russia. In the case of the hotel industry, the impact of the change in the institutional context from a centrally planned to a market economy centers on the connections of the hotel enterprise with public and private sector actors. Here, empirical analysis shows that first, the degree of integration varied between the three time periods examined, second, many relevant institutional effects are observed at industry level, and third, foreign and local enterprises differ especially during the period of rapid institutional change.

The institutional perspective on business strategies provides valuable insights into the changing nature of business in transition economies. Recent research in international business and management has identified a number of institutionally derived forces (Meyer and Peng, 2005) that affect business strategies in a post-socialist environment through transaction costs (Meyer, 2001) or relational networks (Peng and Heath, 1996). Moreover, the importance of informal institutions as a means of coping with the turbulent post-socialist environment has been recognized (Kosonen, 2005 and Salmi, 1995). Often, institutional theory has been combined with other, more mainstream approaches such as theories on the growth of the firm (Peng and Heath, 1996), the network approach (Salmi, 1995), transaction cost economics (Bevan et al., 2004 and Meyer, 2001), organizational change and organizational learning (Newman, 2000) and the theory of local economic governance (Kosonen, 2005). However, research on business strategies and enterprise adaptation in the post-socialist institutional context has often empirically focused on either foreign or local enterprises. Although it has been recognized that strategic choices of foreign and local enterprises may differ during institutional transition (Peng, 2000 and Peng, 2003), there is a relative dearth of studies systematically comparing these two categories of enterprises. Moreover, the persistence of strategies and practices of foreign enterprises operating in Russia calls for further research. Some actions taken to cope with the chaotic business environment of the early 1990s may no longer be valid, whereas others may have become established practices. Thus, it is timely to reinvestigate these issues fifteen years following the collapse of the Soviet Union in 1991. Although on the macro-economic level Russia is officially recognized as a market economy, change processes still continue in industry structures, and in the practices of enterprises and local authorities. From the viewpoint of foreign enterprises, operating in such a business environment is particularly difficult. Management challenges facing foreign enterprises operating in Russia and other Central and East European (CEE) economies in transition – and the means of coping with these challenges – have been the focus of a number of studies during post-socialism. Theoretical approaches applied in existing research have varied from organizational economics to resource-based and institutional theories (Meyer and Peng, 2005). Studies empirically focusing on Russia have addressed issues such as the overall entry strategy and the selection of entry mode of foreign enterprises (McCarthy and Puffer, 1997 and Morgan and Thorpe, 2001). Also, various elements of the subsequent business strategies such as human resource management (HRM) practices (Fey et al., 1999, Fey and Björkman, 2001 and Shekshnia, 1998), and the management of supplier relationships and networks (Salmi, 1995 and Johanson, 2004) have been examined. Moreover, differences between Western and Russian management culture in general (Puffer et al., 1996) and their implications for managerial practices in regard to, for example, knowledge sharing (Hutchings and Michailova, 2004 and Michailova and Husted, 2003) have been analyzed. Although researchers have long recognized the peculiarities of the post-socialist business environment and their implications for the management of foreign business operations in the CEE, the mechanisms through which the transitional institutional context affects business strategies have started to receive explicit attention only recently (Meyer and Peng, 2005). This article seeks to contribute to the existing literature by showing how the transitional institutional context limits strategic choices available for enterprises. To achieve this, I empirically examine how tightly hotel enterprises in the Russian city of St. Petersburg are integrated into their industry-level operating context during different time periods. This investigation shows how business strategy varies between foreign and local enterprises and over time, and how relevant institutions operate at the level of an industry. The article advances the institutional perspective on business strategies by introducing industry-level dynamics into the analysis of institutional processes in post-socialism. Such an intermediate level of analysis has been often lacking in existing research, despite its central role in the institutional theory. Macro-level institutional forces, such as federal and state regulations, seldom directly impact single organizations but are mediated by field1-level structures and processes (Scott, 1998: 130),. Therefore, an industry provides a relevant context in which strategies of foreign and local enterprises facing the same institutional environment can be compared. The article is structured as follows: After theoretical and methodological considerations, changes in management strategies are analyzed as they are influenced by the evolving institutional context, which consists of three time periods. The first period illustrates the starting point of the St. Petersburg (then Leningrad2) hotel sector during central planning. The second period represents the early transition from a command to a market economy, and the third period, the late transition, is characterized by further strengthening of market institutions. The article concludes with a discussion linking the empirical and theoretical considerations.