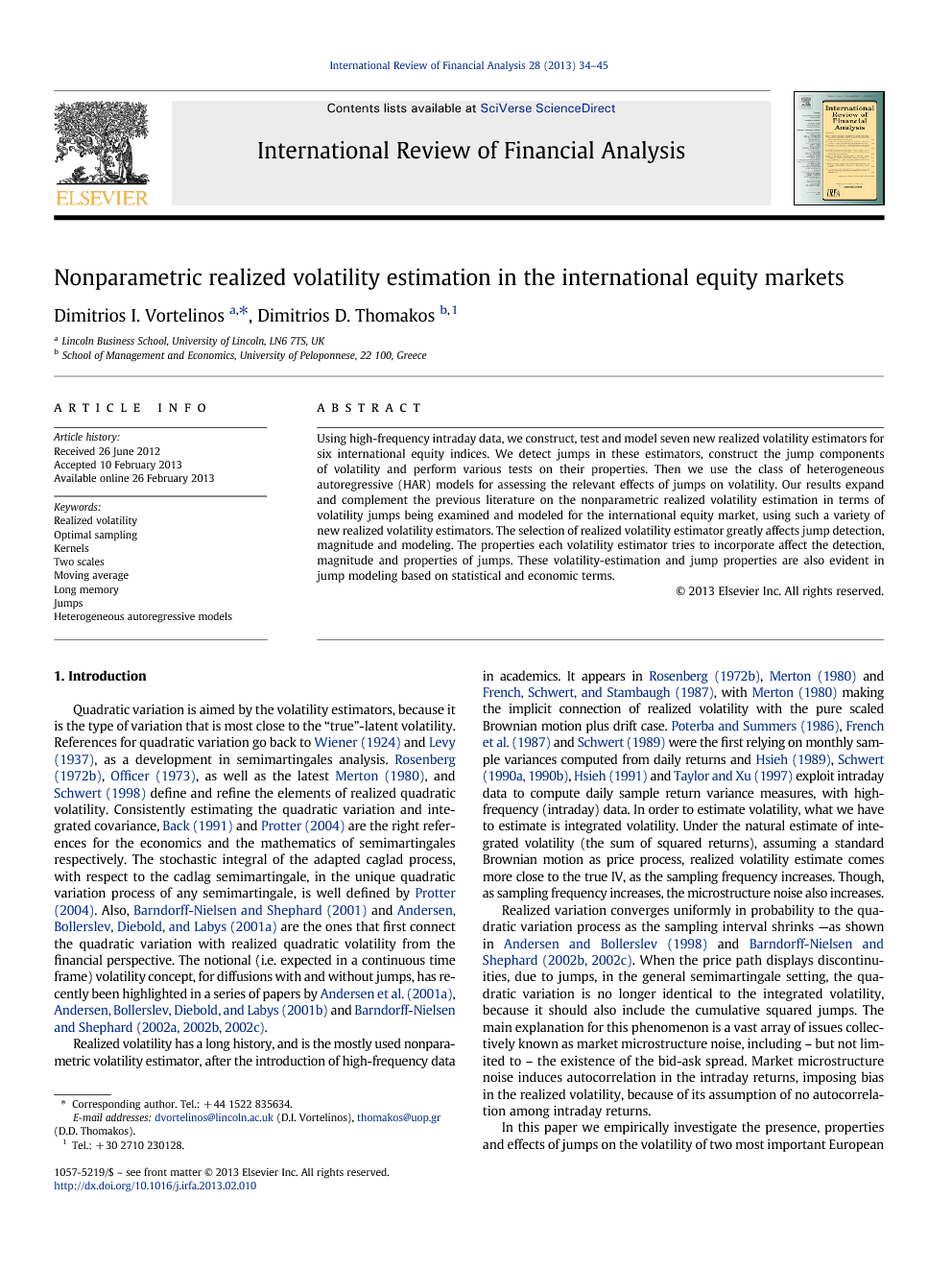 Firstly, all returns series are almost normal. Realized volatility estimators have excess skewness and kurtosis, with a rejection of the CVM normality test and the null of no serial autocorrelation. Persistence (i.e. long-memory) is present and with high values for most of estimators and indices with an average value of 38%. We find that jumps occur about 48% of the time in our sample, an average frequency across volatility series and indices, and that they are characterized by fairly strong persistence. In terms of magnitude of jumps, View the MathML sourceRVtmopt and RVt(TS,fs) give the most robust results. Moreover, there is strong serial correlation in jump series over the entire sample period (Jt(j)) and in jumps only on days with jumps (Jt+ (j)). Though, only for the RVt(TS,BC) there is serial correlation in the durations series. The null of a zero mean in jump series over the entire sample period (Jt(j)) and jumps only on days with jumps (Jt+ (j)) is highly rejected. The effects of jumps on future volatility (in HAR-J model) are stronger than past volatility itself which tends to mitigate the much stronger jump persistence usually present in index volatility. The magnitude of the estimates past-volatility coefficients declines with the horizon. The estimated jump impacts are mostly negative and also significant indicating that jumps lead to much less future volatility that it would otherwise occur with no jumps. When we examine the joint effect of the continuous and jump components of volatility (in HAR-CJ models) we find that the jump components have a stronger effect on future volatility but the continuous components are still present and also significant. This is in contrast to the results of Andersen et al. (2007) where they found that, in the same type of model, the jump impact was insignificant. Moreover, the HAR-CJ model is more informative than the HAR-J model. The former outperforms the latter in terms of: a) the combined impact of a jump, b) the impact without jumps, c) the impact of jumps and d) the R2-values. In conclusion, there is a significant impact from the selection of the realized volatility estimator to jump detection, magnitude and modeling. The properties each volatility estimator tries to incorporate affect the detection, magnitude and properties of jumps. These volatility-estimation and jump properties are also evident in jump modeling.