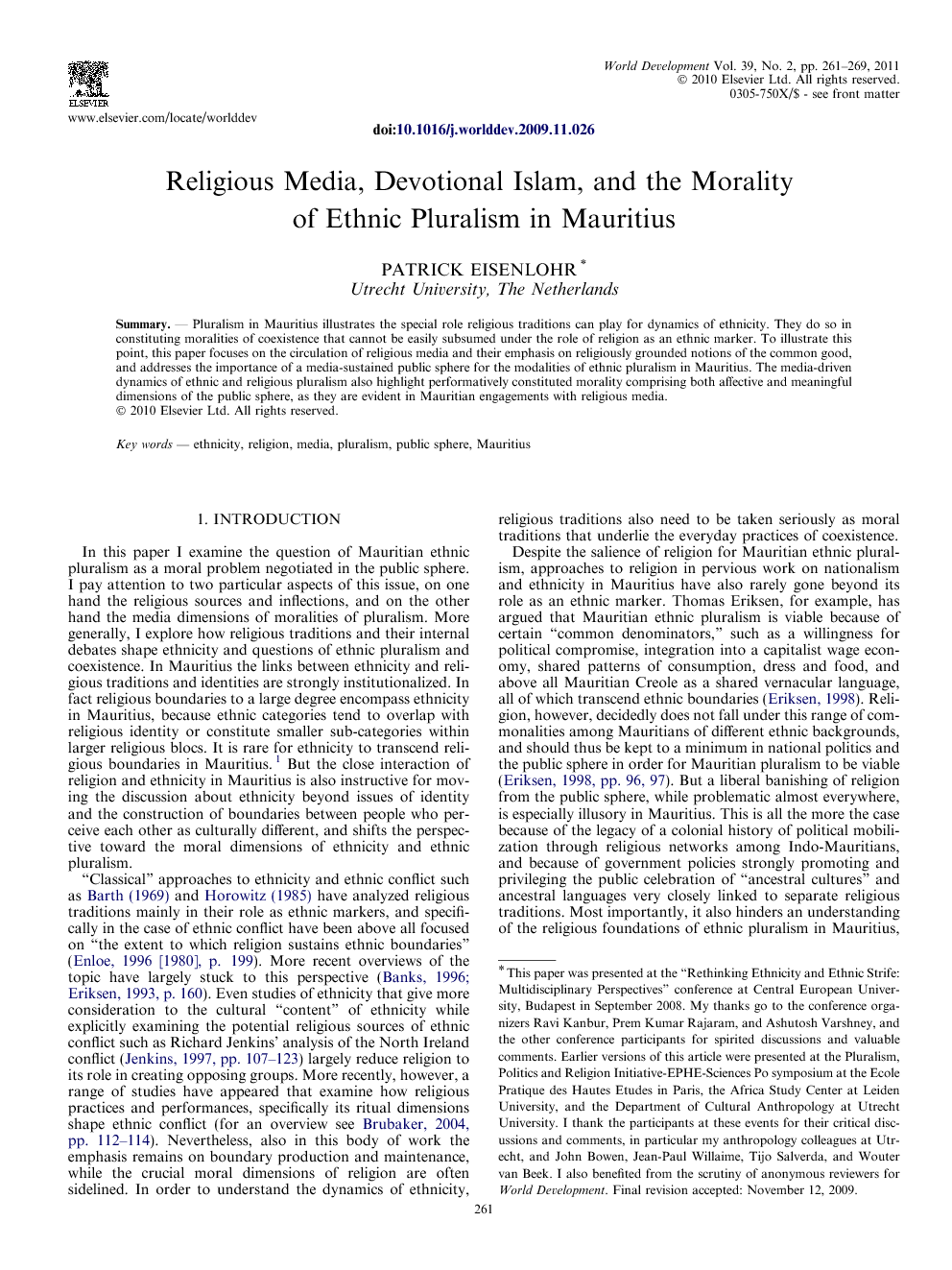 Pluralism in Mauritius illustrates the special role religious traditions can play for dynamics of ethnicity. They do so in constituting moralities of coexistence that cannot be easily subsumed under the role of religion as an ethnic marker. To illustrate this point, this paper focuses on the circulation of religious media and their emphasis on religiously grounded notions of the common good, and addresses the importance of a media-sustained public sphere for the modalities of ethnic pluralism in Mauritius. The media-driven dynamics of ethnic and religious pluralism also highlight performatively constituted morality comprising of both affective and meaningful dimensions of the public sphere, as they are evident in Mauritian engagements with religious media.

In this paper I examine the question of Mauritian ethnic pluralism as a moral problem negotiated in the public sphere. I pay attention to two particular aspects of this issue, on one hand the religious sources and inflections, and on the other hand the media dimensions of moralities of pluralism. More generally, I explore how religious traditions and their internal debates shape ethnicity and questions of ethnic pluralism and coexistence. In Mauritius the links between ethnicity and religious traditions and identities are strongly institutionalized. In fact religious boundaries to a large degree encompass ethnicity in Mauritius, because ethnic categories tend to overlap with religious identity or constitute smaller sub-categories within larger religious blocs. It is rare for ethnicity to transcend religious boundaries in Mauritius.1 But the close interaction of religion and ethnicity in Mauritius is also instructive for moving the discussion about ethnicity beyond issues of identity and the construction of boundaries between people who perceive each other as culturally different, and shifts the perspective toward the moral dimensions of ethnicity and ethnic pluralism. “Classical” approaches to ethnicity and ethnic conflict such as Barth (1969) and Horowitz (1985) have analyzed religious traditions mainly in their role as ethnic markers, and specifically in the case of ethnic conflict have been above all focused on “the extent to which religion sustains ethnic boundaries” (Enloe, 1996 [1980], p. 199). More recent overviews of the topic have largely stuck to this perspective (Banks, 1996 and Eriksen, 1993). Even studies of ethnicity that give more consideration to the cultural “content” of ethnicity while explicitly examining the potential religious sources of ethnic conflict such as Richard Jenkins’ analysis of the North Ireland conflict (Jenkins, 1997, pp. 107–123) largely reduce religion to its role in creating opposing groups. More recently, however, a range of studies have appeared that examine how religious practices and performances, specifically its ritual dimensions shape ethnic conflict (for an overview see Brubaker, 2004, pp. 112–114). Nevertheless, also in this body of work the emphasis remains on boundary production and maintenance, while the crucial moral dimensions of religion are often sidelined. In order to understand the dynamics of ethnicity, religious traditions also need to be taken seriously as moral traditions that underlie the everyday practices of coexistence. Despite the salience of religion for Mauritian ethnic pluralism, approaches to religion in pervious work on nationalism and ethnicity in Mauritius have also rarely gone beyond its role as an ethnic marker. Thomas Eriksen, for example, has argued that Mauritian ethnic pluralism is viable because of certain “common denominators,” such as a willingness for political compromise, integration into a capitalist wage economy, shared patterns of consumption, dress and food, and above all Mauritian Creole as a shared vernacular language, all of which transcend ethnic boundaries (Eriksen, 1998). Religion, however, decidedly does not fall under this range of commonalities among Mauritians of different ethnic backgrounds, and should thus be kept to a minimum in national politics and the public sphere in order for Mauritian pluralism to be viable (Eriksen, 1998, pp. 96, 97). But a liberal banishing of religion from the public sphere, while problematic almost everywhere, is especially illusory in Mauritius. This is all the more the case because of the legacy of colonial history of political mobilization through religious networks among Indo-Mauritians, and because of government policies strongly promoting and privileging the public celebration of “ancestral cultures” and ancestral languages very closely linked to separate religious traditions. Most importantly, it also hinders an understanding of the religious foundations of ethnic pluralism in Mauritius, and presupposes an Enlightenment perspective on religion according to which non-privatized religion has an essentially negative influence on reasonable and peaceful coexistence. In contrast to previous analyses of ethnicity in Mauritius where “religion tends to be subsumed under the more encompassing heading of ethnicity” (Eriksen, 1998, p. 97), the role of religious traditions and practices in Mauritian ethnic pluralism cannot be reduced to one among several dimensions of ethnic dynamics. Religion does of course play a key role in the imagination of communities, the marking of boundaries of identification, or the distribution of scarce resources in situations of competition, but its significance for Mauritian pluralism goes beyond these well-established domains of ethnicity. As I will argue, Mauritian pluralism involves to an important extent the mobilization of moral values chiefly drawn from religious traditions. The mobilization of religious traditions for the sake of non-violent coexistence constitutes an approach to ethnic and religious diversity that is by no means limited to Mauritius, and to underline this point I will briefly explore the close connections between Indian and Mauritian approaches to secularism and religious pluralism.2 The Mauritian example highlights religion as a problem in the study of ethnicity and ethnic conflict more generally, and suggests that to fully grasp the significance of religious traditions for ethnic pluralism requires paying attention to pluralism as a moral domain that is rarely separate from religious traditions and practices.3 In this paper I address the circulation of religious media as one key means of constituting such moral domains of pluralism. In approaching ethnic pluralism as a moral problem, I also stress that the problem of ethnic and religious pluralism goes beyond the deliberative dimension of public spheres and moral reasoning, as its affective dimensions also deserve attention. In this, I emphasize the crucial role of the everyday dimensions of ethnicity (Brubaker, 2004, p. 2), which has already begun to draw attention among students of nationalism and its ethnic dimensions. Several scholars of nationalism have discovered pedagogical techniques and the routines of state schooling, political rallies, and ritual as well as musical performance as one of the chief generating mechanisms of the nation, which at the same time inculcate emotional dispositions that make themselves deeply felt in people’s everyday lives (Askew, 2002, Benei, 2008 and Billig, 1995). Focusing on the routine, everyday aspects of morality that are sustained by the circulation of new religious media, in this paper I highlight such everyday dimensions of ethnic and religious pluralism. In what follows I particularly focus on the links between religious affect and the morality of ethnic and religious pluralism among Mauritian Muslims.

A study of public spheres and coexistence under conditions of ethnic and religious pluralism might be expected to focus mainly on media circulation and exchanges across such boundaries. Instead, I have sought to demonstrate that internal debates and the circulation of religious media within what most recognize as distinct religious communities in Mauritius are a key part of the Mauritian regime of pluralism. Like the Mauritian politics of religiously based diasporic ancestral cultures in a wider sense, such media-driven religious mobilizations and contestations are beset by insecurities about the interaction of media and piety, and doubts over claims that “true” religiosity will make Mauritian citizens capable to peacefully coexist with others. More generally, I have argued that understanding the role of religion in situations of ethnic pluralism requires more than treating religion as an ethnic marker. Religion provides key resources for the moral domains that ultimately underpin ethnic pluralism. Investigating one such moral domain, I have emphasized the importance of transnational religious media for the making of public spheres in which citizens engage with notions of the “common good” under conditions of ethnic pluralism. At the same time, I have asked how affective dimensions of electronically mediated religious experience relate to questions of ethnic pluralism, secularism, and nonviolent coexistence. In highlighting the affective and sensual aspects of the nexus of public culture and religious experience, scholars have provided a much-needed critique of the idea of publics as primarily deliberative and ideological spheres. However, it is necessary to pay attention to the complex interplay and mutual constitution of affect and the ideological and meaningful dimensions of the public circulation of religious discourse and images. It is in this way that previous work on the deliberative aspects of publics can be fruitfully brought in relation with the visceral experiences animating the circulation of discourse and images, as both constitute the possible “common good” in plural societies.