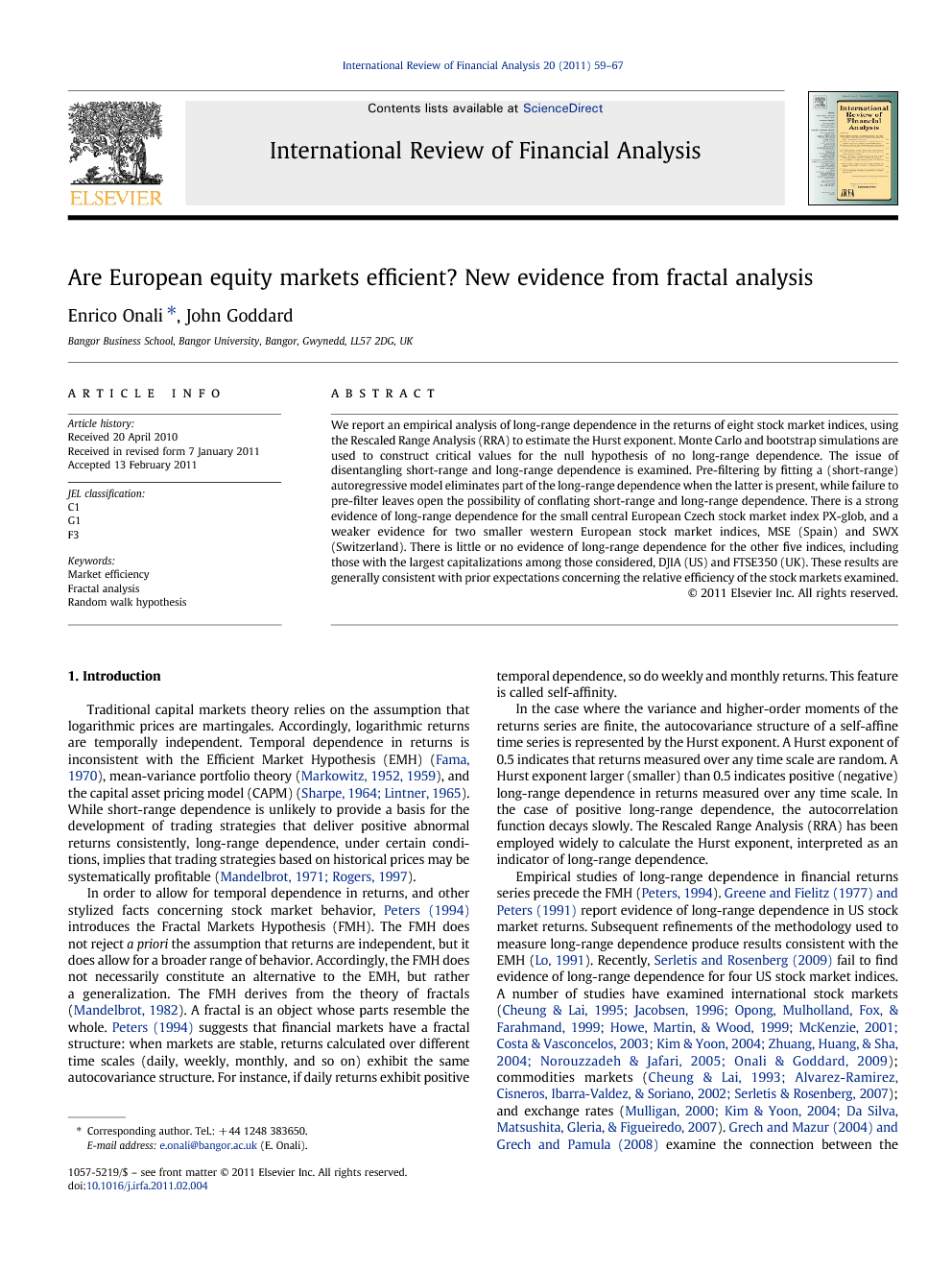 Traditional capital markets theory relies on the assumption that logarithmic prices are martingales. Accordingly, logarithmic returns are temporally independent. Temporal dependence in returns is inconsistent with the Efficient Market Hypothesis (EMH) (Fama, 1970), mean-variance portfolio theory (Markowitz, 1952 and Markowitz, 1959), and the capital asset pricing model (CAPM) (Sharpe, 1964 and Lintner, 1965). While short-range dependence is unlikely to provide a basis for the development of trading strategies that deliver positive abnormal returns consistently, long-range dependence, under certain conditions, implies that trading strategies based on historical prices may be systematically profitable (Mandelbrot, 1971 and Rogers, 1997). In order to allow for temporal dependence in returns, and other stylized facts concerning stock market behavior, Peters (1994) introduces the Fractal Markets Hypothesis (FMH). The FMH does not reject a priori the assumption that returns are independent, but it does allow for a broader range of behavior. Accordingly, the FMH does not necessarily constitute an alternative to the EMH, but rather a generalization. The FMH derives from the theory of fractals ( Mandelbrot, 1982). A fractal is an object whose parts resemble the whole. Peters (1994) suggests that financial markets have a fractal structure: when markets are stable, returns calculated over different time scales (daily, weekly, monthly, and so on) exhibit the same autocovariance structure. For instance, if daily returns exhibit positive temporal dependence, so do weekly and monthly returns. This feature is called self-affinity. In the case where the variance and higher-order moments of the returns series are finite, the autocovariance structure of a self-affine time series is represented by the Hurst exponent. A Hurst exponent of 0.5 indicates that returns measured over any time scale are random. A Hurst exponent larger (smaller) than 0.5 indicates positive (negative) long-range dependence in returns measured over any time scale. In the case of positive long-range dependence, the autocorrelation function decays slowly. The Rescaled Range Analysis (RRA) has been employed widely to calculate the Hurst exponent, interpreted as an indicator of long-range dependence. Empirical studies of long-range dependence in financial returns series precede the FMH (Peters, 1994). Greene and Fielitz, 1977 and Peters, 1991 report evidence of long-range dependence in US stock market returns. Subsequent refinements of the methodology used to measure long-range dependence produce results consistent with the EMH (Lo, 1991). Recently, Serletis and Rosenberg (2009) fail to find evidence of long-range dependence for four US stock market indices. A number of studies have examined international stock markets (Cheung and Lai, 1995, Jacobsen, 1996, Opong et al., 1999, Howe et al., 1999, McKenzie, 2001, Costa and Vasconcelos, 2003, Kim and Yoon, 2004, Zhuang et al., 2004, Norouzzadeh and Jafari, 2005 and Onali and Goddard, 2009); commodities markets (Cheung and Lai, 1993, Alvarez-Ramirez et al., 2002 and Serletis and Rosenberg, 2007); and exchange rates (Mulligan, 2000, Kim and Yoon, 2004 and Da Silva et al., 2007). Grech and Mazur, 2004 and Grech and Pamula, 2008 examine the connection between the Hurst exponent and stock market crashes. In a cross-country analysis, Cajueiro and Tabak, 2004 and Cajueiro and Tabak, 2005 interpret estimated Hurst exponents for either stock returns or volatility as indicators of stock market efficiency. There is a lack of consensus in this literature as to the most appropriate method for measuring long-range dependence. Moreover, in the absence of a sound methodology for statistical inference, many studies base their conclusions solely on point estimates of the Hurst exponent. This paper reports tests for the validity of the EMH for eight stock markets that are believed to be at different stages of development. We examine stock market indices comprising of large numbers of stocks. Predictability of returns owing to thin trading is unlikely. Rejection of the null hypothesis of no long-range independence would suggest the possible existence of arbitrage opportunities. We contribute to the extant literature in several ways. First, we provide strong evidence of departure from random walk behavior in logarithmic prices, in the form of long-range dependence in logarithmic returns, for the Czech stock market index PX-Glob. Weaker evidence of long-range dependence is found for the Spanish and Swiss market indices, MSE and SWX. For the other five market indices examined, there is little or no evidence of long-range dependence in returns. Second, unlike most of the extant literature, we employ Monte Carlo simulations to construct critical values for the null hypothesis that returns are normal and independent and identically distributed (NIID), and bootstrap simulations to construct critical values for the null hypothesis that returns are independent and identically distributed (IID). The Monte Carlo simulations require a normality assumption, while the bootstrap simulations assume that the observed values of each returns series are representative of its underlying distributional properties. Third, it is widely recognized that the identification of long-range dependence in the presence of short-range dependence is challenging, owing to difficulties in disentangling the short and long memory components (Smith, Taylor, & Yadav, 1997). In some previous studies, the RRA is applied to the residuals of a fitted autoregressive model for the returns series, to eliminate any short-range dependence that may be present by pre-filtering before testing for long-range dependence (Peters, 1994, Jacobsen, 1996 and Opong et al., 1999). Alternative methods to control for short-range dependence are suggested by Lo (1991) and Fillol and Tripier (2004). We run the RRA on the original series both with and without pre-filtering. We compare the estimated Hurst exponent for pre-filtered returns with critical values constructed using NIID Monte Carlo and IID bootstrap simulations; and we compare the estimated Hurst exponent for unfiltered returns with critical values constructed using recursive Monte Carlo and recursive bootstrap simulations, in which the simulated series have a short-range dependence structure that corresponds to a fitted autoregressive model for the actual returns series for each index. The rest of the paper is structured as follows. Section 2 reviews the properties of self-affinity, long-range dependence, and the generalized Central Limit Theorem. Section 3 describes the methodology and data. Section 4 reports the empirical results. Section 5 concludes.