عنوان انگلیسی
Effects of the open policy on the dependence between the Chinese ‘A’ stock market and other equity markets: An industry sector perspective
دانلود فوری مقاله + سفارش ترجمه 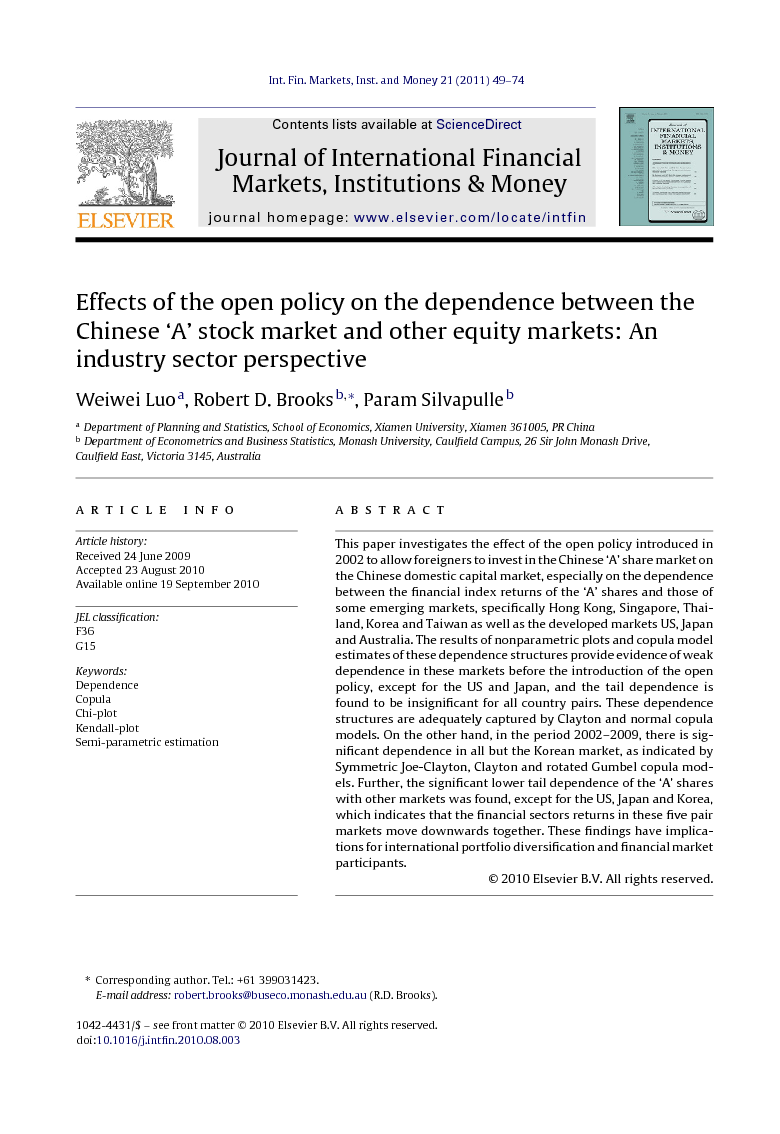 This paper investigates the effect of the open policy introduced in 2002 to allow foreigners to invest in the Chinese ‘A’ share market on the Chinese domestic capital market, especially on the dependence between the financial index returns of the ‘A’ shares and those of some emerging markets, specifically Hong Kong, Singapore, Thailand, Korea and Taiwan as well as the developed markets US, Japan and Australia. The results of nonparametric plots and copula model estimates of these dependence structures provide evidence of weak dependence in these markets before the introduction of the open policy, except for the US and Japan, and the tail dependence is found to be insignificant for all country pairs. These dependence structures are adequately captured by Clayton and normal copula models. On the other hand, in the period 2002–2009, there is significant dependence in all but the Korean market, as indicated by Symmetric Joe-Clayton, Clayton and rotated Gumbel copula models. Further, the significant lower tail dependence of the ‘A’ shares with other markets was found, except for the US, Japan and Korea, which indicates that the financial sectors returns in these five pair markets move downwards together. These findings have implications for international portfolio diversification and financial market participants.

This paper investigates the changing dependence structure in the daily financial index of the Chinese ‘A’ share market and some emerging markets Hong Kong, Singapore, Thailand, Korea and Taiwan as well as the developed markets US, Japan and Australia for the pre- and post-open policy period. Our study sheds light on the research based on an industry sector as well as an evaluation for the open policy of Chinese capital market, which was introduced in 2002. The empirical analysis was carried out for the sample period January 1, 1995 to December 31, 2009. We use the Chi-plot proposed by Fisher and Switzer, 1985 and Fisher and Switzer, 2001 and the Kendall-plot proposed by Genest and Boies (2003) to examine the significance of underlying dependence and assess the tail dependence for both periods. We find that the dependence is significant for the Hong Kong and Singapore markets with China, while the other Asian markets with China A shares exhibits a weak association after the open policy implemented. The semi-parametric method is used to estimate the copula model parameters, and the tail dependence parameters. The semi-parametric method is found to be robust against misspecification of marginal distributions (Kim et al., 2007). We use model selection criteria (AIC and BIC) and the conditional copula function to identify suitable copulas for the daily returns data. As indicated by Chi- and Kendall-plots and the criterion such as AIC/BIC, the Symmetric Joe-Clayton Copula is found to be suitable for HK, Singapore and Korean markets; the rotated Gumbel copula is appropriate for Thai and Australia, and the Clayton copula fits well for Taiwan and Japan. The dependence in the some pair markets has significant asymmetry in the tail dependence, which means the higher left tail dependence than the right tail dependence. The objective of our study is to find evidence of whether or not the introduction of China's open policy in 2002 has affected the dependence of Chinese financial sector on some developed and emerging markets. In order to establish evidence, we estimated the copula models for the two sub-sample periods without making the models complex by introducing dynamics in the dependence. However, an interesting issue for future research is to explore the dynamic structure of market dependence, because the relationship of financial return series may evolve over time. Patton (2006) introduced the concept of the conditional copula and explored the asymmetric dependence of the exchange rates by the dynamic copula function with time-varying parameters. Rodriguez (2007) and Okimoto (2008) find the evidence of changing tail dependence and asymmetries in international equity markets by a mixture of the copulas with a Markov switching model. For the first period Jan 1995 to June 2002, a weak dependence structure between the Chinese financial sector and other countries was found, except for the US and Japan, according to the nonparametric plots as well as the copula model estimates. However, there is no tail dependence in these markets. These findings are not consistent with previous empirical study which concludes that the ‘A’ share market was segmented from outside world. The robust methods used in this study revealed the presence of weak dependence. During the period of the open policy in effect, the financial index of Chinese ‘A’ shares was associated intensively with Hong Kong, Singapore and Thailand, followed by the weak dependence in the pairs with Australia, Taiwan and Japan, while still remaining largely isolated from Korea. Since the post-open policy sample covers the period of the recent global financial crisis, the findings of closer co-movement between ‘A’ shares and other Asian markets has confirmed the effect of open policies in another aspect. Further, for all the pairs, except Korea, Japan and the US, the lower tail dependence is found to be significant. These results show that these financial indexes often experience downward movements together. The results have implications for international portfolio diversification.