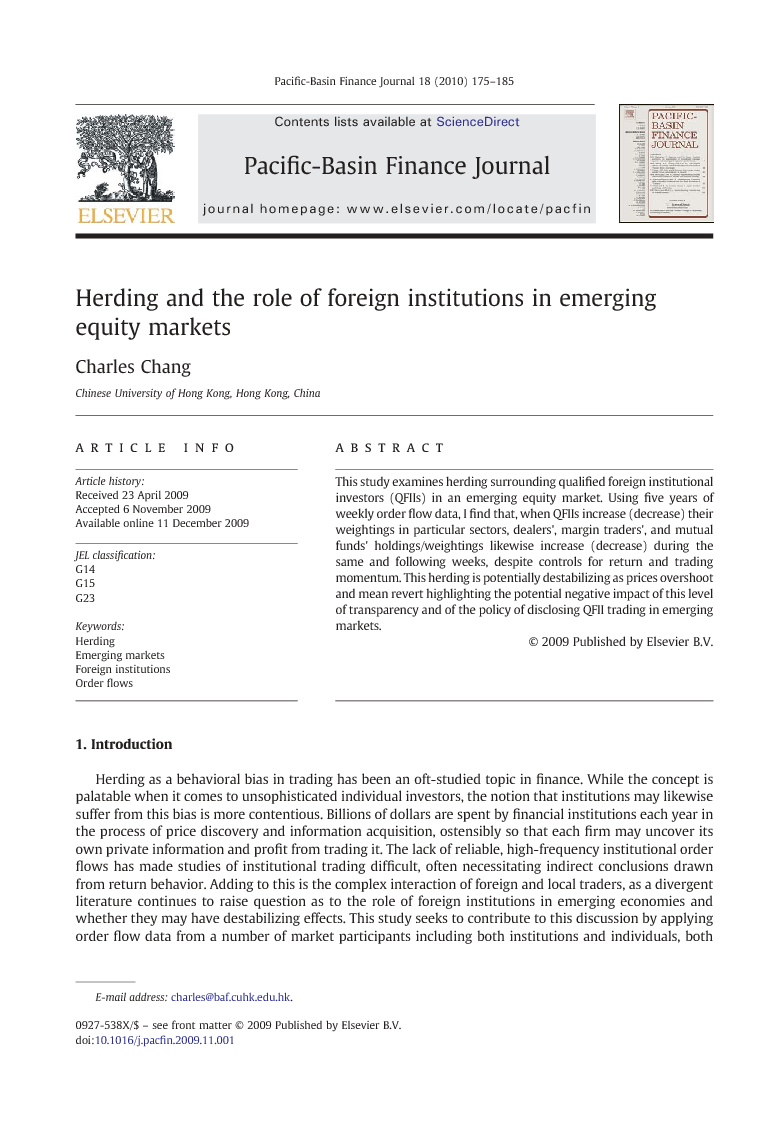 This study examines herding surrounding qualified foreign institutional investors (QFIIs) in an emerging equity market. Using five years of weekly order flow data, I find that, when QFIIs increase (decrease) their weightings in particular sectors, dealers', margin traders', and mutual funds' holdings/weightings likewise increase (decrease) during the same and following weeks, despite controls for return and trading momentum. This herding is potentially destabilizing as prices overshoot and mean revert highlighting the potential negative impact of this level of transparency and of the policy of disclosing QFII trading in emerging markets.

Herding as a behavioral bias in trading has been an oft-studied topic in finance. While the concept is palatable when it comes to unsophisticated individual investors, the notion that institutions may likewise suffer from this bias is more contentious. Billions of dollars are spent by financial institutions each year in the process of price discovery and information acquisition, ostensibly so that each firm may uncover its own private information and profit from trading it. The lack of reliable, high-frequency institutional order flows has made studies of institutional trading difficult, often necessitating indirect conclusions drawn from return behavior. Adding to this is the complex interaction of foreign and local traders, as a divergent literature continues to raise question as to the role of foreign institutions in emerging economies and whether they may have destabilizing effects. This study seeks to contribute to this discussion by applying order flow data from a number of market participants including both institutions and individuals, both foreign and local, to test for herding in an emerging market, Taiwan. Available at the weekly horizon for foreign institutions (QFIIs), dealers, mutual funds, and margin traders, this order flow data allows for a relatively high-frequency and inclusive look at herding where conclusions may be drawn without relying on returns alone. I investigate the distribution of capital across sectors and find that market participants seem to trade in concert. More specifically, margin traders, dealers, and mutual funds seem to follow QFIIs, increasing (decreasing) holdings in a particular sector in the same and periods subsequent to positive (negative) QFII order flows. Granger and Sims causality tests confirm the sequence of this co-movement for both dealers and margin traders, and results are unchanged after controlling for sector and market returns (including lags for both) and for momentum in trading. Finally, tests of returns subsequent to order flow indicate that stocks overshoot and mean revert in response to QFII order flows, which is consistent with the existence of positive feedback trading. Therefore, QFIIs and the practice of disclosing their trading activity may have a destabilizing effect on emerging markets. A large empirical literature has been dedicated to the study of herding, though these studies have generally stopped short of testing trading and often address only one subset of market participants. For example, early work by Lakonishok, et al. (1992) looking at pension funds finds little evidence of herding, whereas Wermers (1999) finds evidence of herding among mutual funds companies, especially for small stocks. Similarly using return data, Sias (2004) concludes that information cascades lie at the root of herding. Looking at several markets, Chang et al. (2000) likewise investigate herding using return data and document decreased levels of return dispersion as evidence of herding. Kim and Nofsinger (2005) studies institutional herding in Japan using annual turnover data and find that herding occurs on a lower level than it does in the U.S. However, when it does occur, it has a large impact on price movements. Applying quarterly trading data, Sias and Starks (1997) find evidence of herding in the serial correlation of stock returns, concluding that the momentum generated in stock returns could be caused by herding. However, the low frequency of this data potentially admits confounding events and information that may lie at the root of this momentum. A substantial literature also exists in the study of foreign investors in emerging markets. While the informational positioning of foreign institutions is unresolved, a number of studies including Grinblatt and Keloharju, 2001, Seasholes, 2000 and Choe et al., 2004 have concluded that foreigners are better informed than locals. These foreign parties and their trading are, in addition, identifiable in many emerging markets, so that, if market participants believe them to have an information/trading advantage, the disclosure of their holdings introduces a conduit for herding. Our work contributes to these two strands of literature in a few ways. First, I apply relatively high-frequency order flow data from a number of market participants. The study includes five years of weekly order flows from the three largest institutional participants in the Taiwan market: QFIIs, dealers, and mutual funds. It also includes the order flows of margin traders, a group that consists only of individual traders. The relatively high frequency and inclusiveness of our data allow us to track multiple market participants and the interactions of their trades. As a result, I am able to study herding in a more detailed way, potentially differentiating between herding and positive feedback trading. Specifically, I investigate whether groups simply trade concurrently or if they follow. Second, the study looks at the allocation of exposure among the many sectors of the economy, allowing us to measure shifts in information rather than just overall increases in capital deployed. Importantly, this study focuses on changes in holdings, both in terms of market capitalization and number of shares, not returns. As a result, price impact effects owing to the relative size of each group of market participants are not substantive. Third, this study addresses an important cross-section of herding behavior, that which is induced by the existence of QFIIs and the practice of disclosing their trades/holdings. Pursuant to studies on positive feedback such as Delong et al. (2000), following behavior is potentially destabilizing for the market and can cause prices to overshoot, something addressed in this study. Madhavan (1996) develops a model that shows that transparency may act to increase volatility arising from this kind of herding. In subsequent work, Madhavan et al. (2005) document that increased transparency leads to higher levels of volatility in the Toronto Stock Exchange, while Bloomfield and O'Hara (1999) show that transparency benefits market makers at the expense of traders. Because of foreign ownership rules, many emerging markets disclose foreign institutional trading. Our study may therefore have important policy implications for emerging markets regarding the appropriate level of disclosure as it pertains to foreign investors. The remainder of the paper is organized as follows: Section 2 describes our data, Section 3 addresses the empirical methodology employed and presents main findings, Section 4 discusses robustness tests, and Section 5 concludes.

This study seeks to contribute a better understanding of herding at both the individual and institutional levels by applying a new order flow data set. By looking directly at trading, the conclusions drawn here have the advantage of not having to rely strictly on returns as evidence of herding. Rather, I investigate directly how trading is related among a number of key players in the market, specifically, foreign institutions, dealers, margin traders, and mutual funds. The study focuses on shifts in portfolio weights rather than gross invested capital to identify shifts in information rather than overall increases in capital deployment. Results show that trading of these four parties is closely interrelated, and that foreign institutions seem to lead the way. Results are robust to controls for momentum, lagged trading, and variable re-specifications. Importantly, the practice of disclosing QFII trading to the public potentially acts a conduit for this herding. Unlike most other players in the market, QFIIs' trading activities are reported to the general public on a daily basis. Evidence provided in this study indicates that other market participants, and the market as a whole, track QFII trading and mimic it. Results show that this potentially causes the market to overshoot, and thus may generate hyper-volatility. Ostensibly, the finding that institutions and margin traders trade in concert implies that uninformed individual investors provide liquidity, potentially making them the ultimate “losers” in the proposition. Policy-makers may be wise to re-visit this antiquated, potentially volatility-inducing disclosure/transparency policy.