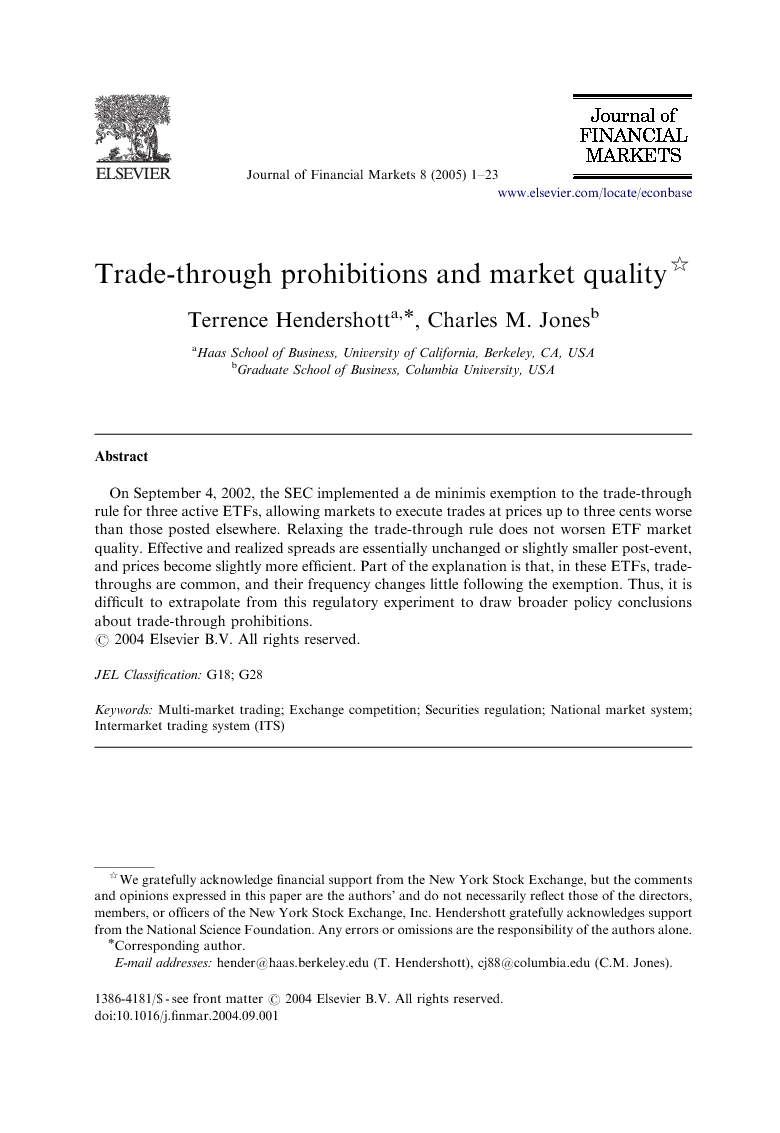 On September 4, 2002, the SEC implemented a de minimis exemption to the trade-through rule for three active ETFs, allowing markets to execute trades at prices up to three cents worse than those posted elsewhere. Relaxing the trade-through rule does not worsen ETF market quality. Effective and realized spreads are essentially unchanged or slightly smaller post-event, and prices become slightly more efficient. Part of the explanation is that, in these ETFs, trade-throughs are common, and their frequency changes little following the exemption. Thus, it is difficult to extrapolate from this regulatory experiment to draw broader policy conclusions about trade-through prohibitions.

Financial market regulators and researchers are currently wrestling with a fundamental issue: how to facilitate competition between securities markets without destroying the liquidity externalities that arise when traders are able to come together in space and time. This balancing act underlies much of the U.S. regulatory system for multimarket trading. For example, other venues can trade stocks listed on the New York Stock Exchange (NYSE) or American Stock Exchange (AMEX), but most of these venues are linked together (by Congressional mandate). Among other things, the linkages are designed to enable investors to access the best price for a security, no matter where that price may be offered. Alongside these linkages is the so-called trade-through rule that prohibits venues from executing trades at prices worse than those posted elsewhere. This rule is controversial, in part because some market centers do not find the current linkages adequate. Via Regulation NMS, the U.S. Securities and Exchange Commission (SEC) is currently proposing to expand and modify trade-through prohibitions in all U.S. equity markets (SEC, 2004). On September 4, 2002, the SEC relaxed the trade-through rule in the three most active exchange-traded funds (ETFs). This regulatory change allows us to examine the effect of trade-through prohibitions on market quality. Our results show that relaxing the trade-through rule in this case has little effect on market quality. ETF spreads are little changed, and if anything, there is evidence of a modest reduction in trading costs and a modest improvement in the efficiency of price discovery for these ETFs. When we look at the actual frequency of trade-throughs, we find that the relaxed rule has almost no impact on the incidence of trading through. This is somewhat surprising, but it explains the lack of effect on market quality. For whatever reason, when the trade-through rule is relaxed, trade-throughs change little, and overall market quality also changes little. With rapid technological improvement and the consequent growth of electronic stock exchanges, competition between and regulation of trading venues are fundamental questions in market microstructure (see O’Hara (2004) for an overview). We know of no other work on the effects of trade-through rules, but research on competition between markets and on order routing and preferencing is related.1 The Nasdaq order handling rules (Barclay et al., 1999) and the cross-listing of equity options (de Fontnouvelle et al., 2003; Battalio et al., 2004) are excellent examples of how competition between venues benefits investors.2 Venues compete by posting quotes and also by arranging to receive order flow. Bessembinder (2003) and Chung et al. (2004), among others, examine order flow at venues not posting the best quotes. In studies designed to test causality, Battalio (1997) study NYSE stocks, and Bloomfield and O’Hara (1998) use experiments, but both conclude that preferencing has little impact. If competition and best execution requirements (see Macey and O’Hara, 1997) can overcome potential agency problems between brokers and customers regarding order preferencing, the need for trade-through prohibitions is less clear. If indeed trade-through prohibitions are beneficial, then proper enforcement of them—something we find little evidence of—is required. The paper proceeds as follows. Section 2 provides some details on ETFs, relevant linkages between markets, and the event at the heart of this study. Section 3 discusses the data and provides some descriptive statistics, Section 4 examines trading cost measures before and after the exemption takes effect, and Section 5 focuses on changes in the efficiency of prices. Section 6 tries to explain the result by looking at the incidence of trade-throughs before and after, while Section 7 concludes with some suggestions for improvements to the trade-through rule.

On September 4, 2002, the SEC implemented a de minimis exemption to the socalled trade-through rule for the three most actively traded ETFs, allowing markets to execute trades at prices up to three cents worse than those posted at other venues. We examine the effects of this regulatory experiment on ETF market quality. There is no evidence that relaxing the trade-through rule worsens market quality. Effective and realized spreads are essentially unchanged or slightly lower after the exemption goes into effect, and there are no identifiable market centers that appear to be using the exemption as an opportunity to gouge customers. ETF prices become slightly more efficient post-event, measured using 15- to 60-second quote return autocorrelations and cross-autocorrelations with futures price innovations. A look at the frequency of trade-throughs provides part of the explanation: the new rule has almost no effect on the likelihood of trading through. In these ETFs, we establish that the various markets are already trading through with abandon, so the exemption simply represents a case of the rules catching up to practice. The threecent trade-through exemption is close to a non-event for these ETFs. Among other things, this highlights the importance of enforcement. If tradethrough rules are not enforced, there is little point to having them on the books. The current ITS system requires the aggrieved party to contact the offending market center to obtain restitution. As a result, small trade-throughs are not worth pursuing in practice, and the lack of sanctions reduces venues’ incentives to comply with the prohibitions. Furthermore, the evidence here suggests that accurately identifying trade-throughs may be difficult given current data. Thus, we would advise the SEC and other regulators to consider not just the trade-through rules themselves but also their enforcement implications. The de minimis exemption initially appears to be a useful regulatory experiment, but ultimately this event cannot tell us much about the costs or benefits of a ARTICLE IN PRESS T. Hendershott, C.M. Jones / Journal of Financial Markets 8 (2005) 1–23 21 trade-through prohibition in other stocks. The previous lack of compliance makes it difficult to extrapolate. From this event, we can conclude only that if the tradethrough rule is already being ignored, a trade-through exemption is unlikely to have much effect. In the current regulatory debate over the proposed Regulation NMS, some are trying to use the ETF de minimis exemption as evidence that trade-through rules have no effect on market quality. Our paper cautions against that kind of conclusion and urges restraint in interpreting the results of this regulatory change. Compared to most individual equities, these ETFs are extremely actively traded and have very narrow spreads, and pricing is driven by arbitrage considerations. Thus, it seems likely that trade-through rules are ignored more in these ETFs than they are in individual equities. If true, then individual equities may respond very differently to a change in the trade-through rules. Thus, a second regulatory pilot targeting a cross-section of individual common stocks would provide important data points to policymakers. In principle, trade-through rules could facilitate virtual integration of trading across markets and reduce agency problems between brokers and customers by forcing brokers to find the best price. Therefore, prohibiting trade-throughs and enforcing market integration and linkages by public regulations is sensible if market linkages perform adequately and are well monitored. However, Stoll (2001) compellingly argues that integration can be performed at the investor level by existing sophisticated order-routing software and that mandated regulatory linkages suffer from underinvestment and technological obsolescence. In fact, regulatory linkages such as ITS and the current options linkage are lightly used for just this reason. Thus, prohibiting trade-throughs without solving the technological and incentive problems could stifle innovation by forcing markets to adapt to antiquated public market linkages. As currently proposed, Regulation NMS partially addresses these concerns by limiting trade-through protection to markets with fast turnaround times, while slower markets can be traded through by at most five cents per share. However, definitions of fast and slow markets will surely prove contentious, as will discussions about the details of the linkages. The SEC proposal also allows investors to opt out of trade-through protection, which may provide flexibility for investors able to monitor effectively the performance of intermediaries. Trade-through rules are also proposed for Nasdaq for the first time. Does this proposal help further a competitive national market system? Even the authors do not completely agree on the answer. We do agree, however, that the national market system could change markedly on the basis of very little empirical data, and we would encourage additional empirical work in this area that would help inform the debate.