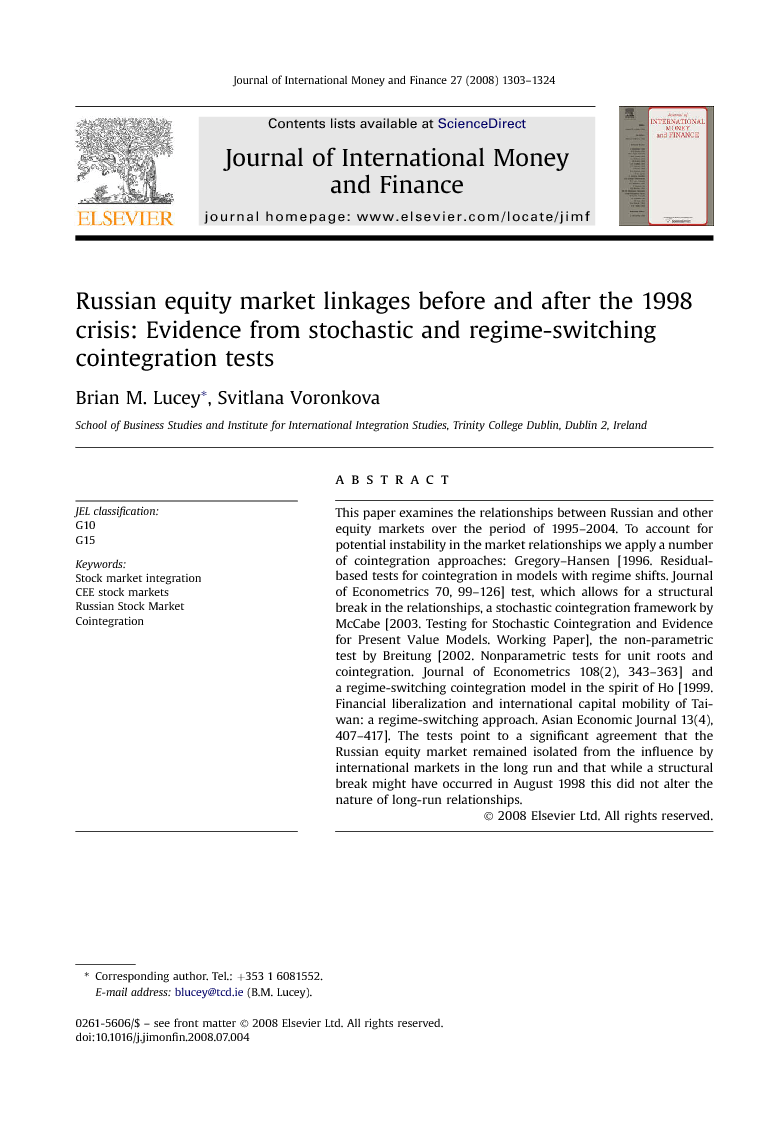 This paper examines the relationships between Russian and other equity markets over the period of 1995–2004. To account for potential instability in the market relationships we apply a number of cointegration approaches: Gregory–Hansen [1996. Residual-based tests for cointegration in models with regime shifts. Journal of Econometrics 70, 99–126] test, which allows for a structural break in the relationships, a stochastic cointegration framework by McCabe [2003. Testing for Stochastic Cointegration and Evidence for Present Value Models. Working Paper], the non-parametric test by Breitung [2002. Nonparametric tests for unit roots and cointegration. Journal of Econometrics 108(2), 343–363] and a regime-switching cointegration model in the spirit of Ho [1999. Financial liberalization and international capital mobility of Taiwan: a regime-switching approach. Asian Economic Journal 13(4), 407–417]. The tests point to a significant agreement that the Russian equity market remained isolated from the influence by international markets in the long run and that while a structural break might have occurred in August 1998 this did not alter the nature of long-run relationships.

After the collapse of communist and socialist regimes at the start of the 1990s, Central and Eastern European (CEE) economies began their journey into capitalism by establishing private property and capital markets. As a result, equity exchanges have been re-established in the region. These markets have displayed considerable growth in their size and in their degree of sophistication. These CEE stock markets have attracted the interest of academics for a number of reasons. Firstly, these markets provide an opportunity to re-examine existing asset-pricing models and pricing anomalies in the context of evolving markets. CEE market efficiency is tested in Schroder (2001) and Gilmore and McManus (2002); a version of CAPM is tested in Charemza and Majerowska (2000); Mateus (2004) explores the predictability of returns in European emerging markets within an unconditional asset-pricing framework; and the January pricing anomaly is studied in Henke (2006). Secondly, in light of growing interdependencies between world equity markets, numerous studies have investigated the extent to which emerging European stock markets are integrated with global markets, and the extent to which they are vulnerable to global and local shocks (see e.g., Gelos and Sahay, 2000, Gilmore and McManus, 2002 and Scheicher, 2001). Among the CEE markets, those of Poland, Hungary and the Czech Republic (the ‘Vysegrad’ countries) have attracted most academic attention. Gilmore (2002) finds that these markets were isolated from the influence of international markets, and Gilmore et al., 2005a and Gilmore et al., 2005b suggest that these markets offered sizable diversification benefits to foreign investors. Other works find that the CEE markets became increasingly correlated with developed markets in the late 1990s both in the short run (Gelos and Sahay, 2000, Gilmore and McManus, 2002 and MacDonald, 2001) and in the long run (Voronkova, 2004, Gilmore et al., 2005a and Gilmore et al., 2005b). The present paper seeks to investigate the extent and time varying nature of linkages between the Russian and world stock markets. The repercussions of the Russian currency and debt crises of 1998 for world stock markets have been extensively (e.g. Baig and Goldfain, 2000, Gelos and Sahay, 2000, Hernández and Valdés, 2001 and Dungley et al., 2003) studied. However, as far as we are aware, no studies have been published on the linkages of the Russian market with developed or developing markets after 1998. This lack of research is surprising. Firstly, Russia is the largest stock market of the CEE region in terms of market capitalisation. Secondly, 2005 saw a revival of the foreign investors' interest in the Russian equities, reflected in the reversal from portfolio investment outflow in the previous year to an over 30% increase (Institute for the Economy in Transition, 2006). Thirdly, Russia remains the dominant regional economic and political power. Although trade links have declined significantly since the collapse of the Soviet Union, Russia is still an important trading partner of the CEE countries, as well as a significant source of direct investment into the region (Jochum et al., 1998, UNCTAD, 2004a, UNCTAD, 2004b and UNCTAD, 2004c). Fourthly, a number of studies have shown that the nature of market linkages is time-varying (Bekaert and Harvey, 1995 and Bekaert and Hodrick, 1992). Thus the aim of this paper is to investigate and document the changing nature of linkages between the Russian, CEE and developed stock markets and to explore whether these have changed since the 1998 crisis. This paper makes a number of contributions. First, we extend knowledge of an important developing equity market. Second, we apply a variety of novel cointegration techniques to the investigation of international stock market linkages. Third, we provide evidence of the important role of the Russian crisis for international market linkages. Finally, we demonstrate the time variation in relationships between Russian and other markets in two, easily interpreted, graphical representations. The structure of the remainder of this paper is as follows. Section 2 discusses the literature on the Russian stock market. Section 3 provides a brief overview of the development of the Russian stock market since its re-establishment in 1991, including the events of the Russian crisis of August 1998 and its implications for the Russian stock market. Sections 4 and 5 present data and methodology used in the study. Sections 6 and 7 discuss empirical results and Section 8 provides conclusions.

Despite the evidence of its impact on world markets, the impact of the Russian crisis of 1998 on linkages between Russian and other equity markets has to date remained unexplored. Using traditional multivariate cointegration approaches, we find no equilibrium relationships over the 1995–2004 period. Russia appears to have been and to remain segmented from the world equity markets. However, this finding can be challenged if one takes into account time variation and breaks in the cointegration relationship. Allowing for these we find some evidence that the effects are more complex. This finding is itself, however, sensitive to the underlying properties of the data, as evidenced by recent developments in stochastic, regime shifting, and non-parametric cointegration. Overall we conclude that the Russian market does not show strong evidence of increased long-run convergence, either with regional or developed markets. This conclusion of long-term segmentation does not hold for short-term linkages. As shown by a DCC analysis, conditional bivariate correlations have increased in the post-crisis period by comparison to the pre-crisis period. However, even the increased correlations are low, and the preponderance of short- and long-term results therefore indicate the continued and continuing possibility of diversification benefits from investing in Russian equities for foreign investors, both in the short and long run.