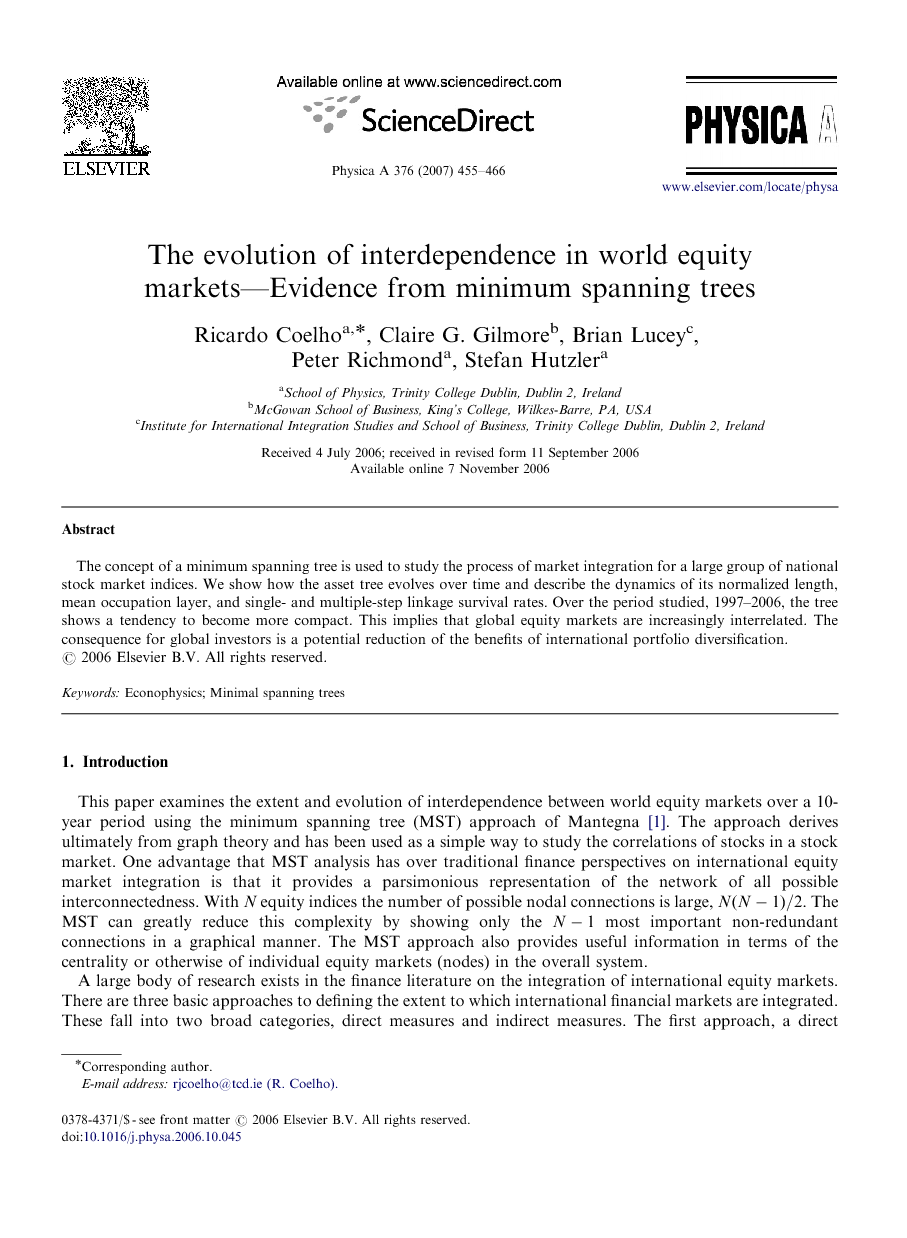 The concept of a minimum spanning tree is used to study the process of market integration for a large group of national stock market indices. We show how the asset tree evolves over time and describe the dynamics of its normalized length, mean occupation layer, and single- and multiple-step linkage survival rates. Over the period studied, 1997–2006, the tree shows a tendency to become more compact. This implies that global equity markets are increasingly interrelated. The consequence for global investors is a potential reduction of the benefits of international portfolio diversification.

This paper examines the extent and evolution of interdependence between world equity markets over a 10-year period using the minimum spanning tree (MST) approach of Mantegna [1]. The approach derives ultimately from graph theory and has been used as a simple way to study the correlations of stocks in a stock market. One advantage that MST analysis has over traditional finance perspectives on international equity market integration is that it provides a parsimonious representation of the network of all possible interconnectedness. With N equity indices the number of possible nodal connections is large, N(N-1)/2N(N-1)/2. The MST can greatly reduce this complexity by showing only the N-1N-1 most important non-redundant connections in a graphical manner. The MST approach also provides useful information in terms of the centrality or otherwise of individual equity markets (nodes) in the overall system. A large body of research exists in the finance literature on the integration of international equity markets. There are three basic approaches to defining the extent to which international financial markets are integrated. These fall into two broad categories, direct measures and indirect measures. The first approach, a direct measure, is couched in terms of the extent to which the rates of return on financial assets with similar risk characteristics and maturity are equalized across political jurisdictions. We call this a direct measure as it invokes the so-called law of one price. The second approach involves the concept of international capital market completeness and in essence examines the extent to which asset prices and returns are a function of domestic or international factors. The third approach is based on the extent to which domestic investment is financed from world savings rather than from domestic savings. Both of these latter measures can be called indirect. In general, where possible, finance researchers consider the direct approach to be preferable [2]. The direct approach to integration has been studied by a number of researchers who have evaluated the evolution of equity market correlations, the extent to which common stochastic trends in returns emerge, and the specification of dynamic paths toward greater integration between the returns on equities. Surveys of this literature can be found in Refs. [2], [3] and [4]. We contribute to the research on the dynamic process of integration through the use of MST analysis, which is particularly suitable for extracting the most important information when a large number of markets are under examination. MST analysis has been applied previously to analyze the clustering behavior of individual stocks within a single country, usually the US [5], [6], [7] and [8]. These studies typically find a strong correspondence between business sector and cluster structure, illustrating the ability of the MST methodology to convey meaningful economic information. While these are static analyses, a variety of dynamic analyses of the time-varying behavior of stocks has also been developed in Refs. [9], [10], [11], [12], [13] and [14]. MST analysis has also been applied to the foreign exchange markets as a means to trace the dynamics of relationships between currencies [15]. To our knowledge only one study has been published to date applying the MST approach to groups of national equity markets [16]. There is one other earlier study [17], which however used clustering analysis. A simple dynamic analysis based on partially overlapping windows of indices for 20 countries for the years 1988–1996 finds that markets group according to a geographical principle, as is also the case for a static examination of 51 world indices for the years 1996–1999 in the same study [16]. The temporal evolution showed the stability of the North-America cluster and the increase in the size of the European and Asian-Pacific clusters, in time. Our research significantly extends this work by applying dynamic MST methods to examine the time-varying behavior of global equity market co-movements for a group of 53 developed, emerging and developing countries over the years 1997–2006. This period includes major market events such as the Asian and Russian economic crises, the introduction of the euro, and the enlargement of the European Union (EU). In addition to confirming the earlier evidence of a geographical organizing principle we document a tendency of the MST toward higher density over time, indicating an increasing degree of integration of international equity markets. Such a finding is of interest to portfolio managers and investors, as the implication is of decreased potential for diversification benefits and thus perhaps decreased returns for international investors.

The use of the MST provides a way to extract a manageable amount of information from a large correlation matrix of global stock returns to reveal patterns of links between different markets. It provides an insight into market behavior that is not as easily obtained from the correlation matrix as a whole. Applied dynamically, the analysis lets us observe consistencies as well as evolutions in patterns of market interactions over time. As would be expected, there is a strong tendency for markets to organize by geographical location, although other, related factors such as economic ties, may also play important roles. Developed European countries, with France and Germany at their center, have consistently constituted the most tightly linked markets within the MST. There has also been a limited tendency of the CEE accession countries to link more closely with the more developed EU countries. We have seen that the mean correlations show a tendency to increase over the period as a whole, while mean distances in the MST and the mean occupation layers have been trending downward. These dynamic measures point to a compression of the MST over time, meaning a tighter degree of interaction, or integration, between markets. These findings have implications for the international investor. International diversification under standard Markowitz portfolio construction relies on the existence of a set of assets which display consistent and persistent differences in correlations. These correlations form the basis of the MST. From a Markowitz portfolio perspective [21], or any portfolio perspective which relies on a spread of (relatively low) correlations, the compression which we have observed implies reduced diversification benefits over the time period we have examined. Finally, the multi-step survival ratio also indicates that while clusters of any given period may be homogeneous, the likelihood of these remaining stable over a reasonable portfolio period is small. This points to a need for frequent restructuring to make maximum use of diversification benefits.