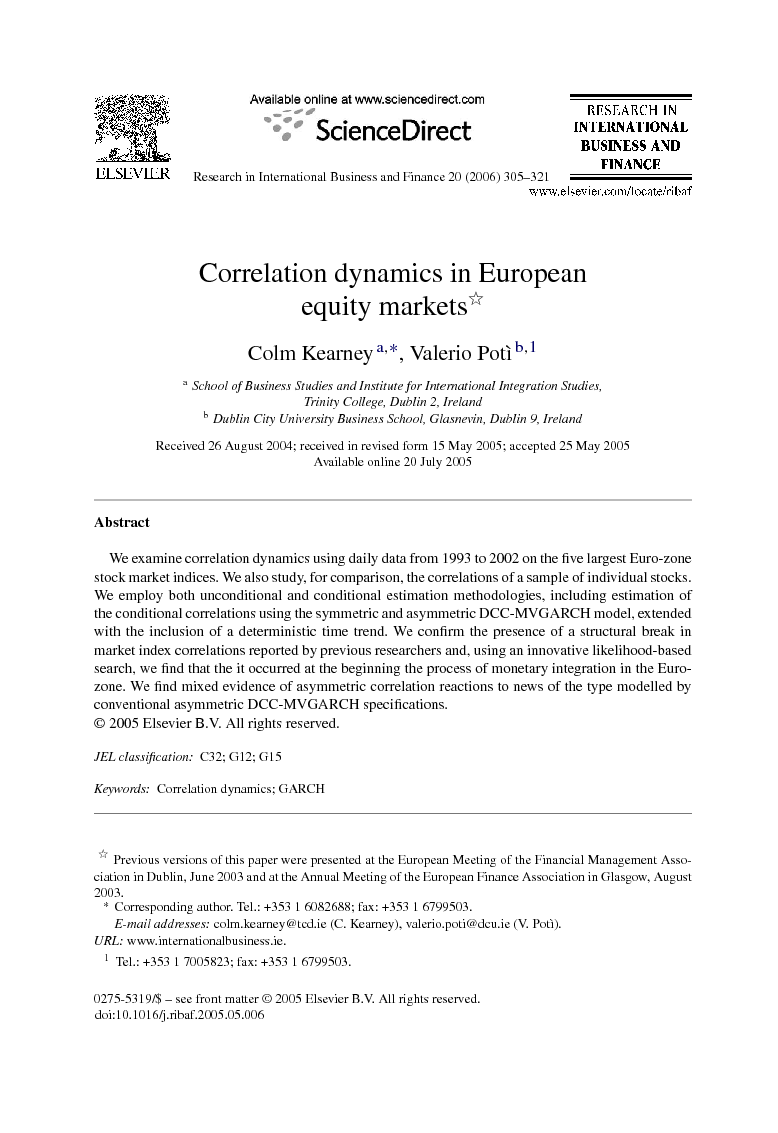 We examine correlation dynamics using daily data from 1993 to 2002 on the five largest Euro-zone stock market indices. We also study, for comparison, the correlations of a sample of individual stocks. We employ both unconditional and conditional estimation methodologies, including estimation of the conditional correlations using the symmetric and asymmetric DCC-MVGARCH model, extended with the inclusion of a deterministic time trend. We confirm the presence of a structural break in market index correlations reported by previous researchers and, using an innovative likelihood-based search, we find that the it occurred at the beginning the process of monetary integration in the Euro-zone. We find mixed evidence of asymmetric correlation reactions to news of the type modelled by conventional asymmetric DCC-MVGARCH specifications.

International fund managers usually divide their equity portfolios into a number of regions and countries, and select stocks in each country with a view to outperforming an agreed market index by some percentage. This provides asset diversity within each country together with international diversification across political frontiers. Two interrelated features of this strategy have attracted the recent attention of financial researchers and practitioners. The first relates to expected returns. A growing body of empirical evidence on the performance of mutual and pension fund managers has questioned the extent to which they systematically outperform their benchmarks ( Blake and Timmerman, 1998, Wermers, 2000, Baks et al., 2001 and Coval and Moskowitz, 2001). To the extent that fund managers fail to add value when account is taken of their fees, the more passive strategy of buying and holding the market index for each country might yield an equally effective but more cost-efficient international diversification. The second relates to risk. It has been known for some time that equity return correlations do not remain constant over time, tending to decline in bull markets and to rise in bear markets ( De Santis and Gerard, 1997, Ang and Bekaert, 1999 and Longin and Solnik, 2001). Correlations also tend to rise with the degree of international equity market integration ( Erb et al., 1994 and Longin and Solnik, 1995), which has gathered pace in Europe since the mid-1990s ( Hardouvelis et al., 2000 and Fratzschler, 2002). It is of considerable interest, therefore, to investigate the relative strengths of the trends in correlations in European equity markets, because the findings have relevance for the diversification properties of passive and active international investment strategies. We investigate the correlation trends and dynamics in the equity markets of the European Monetary Union (henceforth, Euro area). In particular, we study the correlation between Euro area national stock market indices over various sample periods. For comparison, we also study the correlation amongst a sample of individual Euro area stocks. We first model correlations in an unconditional setting and we test for the presence of either a stochastic or a deterministic time trend. We then model them in a conditional setting. To this end, we apply the DCC-MV GARCH model of Engle, 2001 and Engle, 2002 and Engle and Sheppard (2001) and we extend it with the inclusion of a deterministic time trend. In so doing, we specify the model to facilitate testing for non-stationarity, structural breaks and asymmetric dynamics in the correlation processes. To identify the date of the structural break, we employ an innovative search that maximise the likelihood of the multivariate conditional correlation model. Finally and more innovatively, to test for residual asymmetry in the distribution of asset returns not captured by our model, we employ the Engle and Ng (1993) diagnostic test in a multivariate setting. We find significant persistence in all our conditional correlation estimates. We also provide weak evidence that index correlations tend to spike up after joint negative news, but contrary to the recent evidence of Cappiello et al. (2003) and others, this phenomenon is not well captured by a linear specification. We confirm a significant rise in the correlations amongst national stock market indexes that can best be explained by a structural break shortly before the official adoption of the Euro. It follows that portfolio managers investing in the Euro-zone should not overestimate the benefits of pursuing passive international diversification strategies based on holding national stock market indexes. The remainder of our paper is structured as follows. In Section 2, we describe our data set and provide summary statistics. In Sections 3 and 4, we perform a range of statistical tests to discern more formally the behaviour of unconditional and conditional correlations. In the final section, we summarise our main findings and draw together our conclusions.

The purpose of this paper is to contribute to the literature on the correlation dynamics in European equity markets. Our main focus has been on country-level market index correlations, but we also examined stock correlations for comparison purposes. We applied the symmetric and asymmetric version of the DCC-MVGARCH model of Engle, 2001 and Engle, 2002 and Engle and Sheppard (2001) to capture their behaviour over time. We find strong evidence of a structural break in the mean shortly before the introduction of the Euro. This explains both the strong persistence of the correlation time series and its significant rise over the sample period. This confirms the results reported by Cappiello et al. (2003) and is consistent with the rise in volatility spillovers noticed by Baele (2002). We also find evidence that, at the level of the national stock market indices, the conditional correlation response to past positive and negative news is asymmetrical. Stock correlations instead do not appear to follow an asymmetric correlation process. These findings provide mixed support to a popular explanation see, for example, Patton (2002) for why the skewness of market index returns is often negative whereas stock returns have either negative or positive skewness (similar findings are reported in Table 2). More importantly, applying a multivariate extension of the Engle and Ng (1993) test, we find that beyond asymmetric correlation reactions to past returns innovations there must be other, perhaps more important source of asymmetry in the distribution of asset returns. This issue represents an important and fruitful topic for future research. Overall, our results suggest that non-country factors drive the volatility of equity returns. In particular, because of the rise in correlations among the largest national stock markets indices, the stochastic components of the latter can now be expected to behave almost identically (with conditional correlations being close to 100 percent as reported in Fig. 3). This suggests that there is little expected benefit from strategies that diversify across Euro-zone market indices, although diversification across stocks remains useful. This explains why, as reported by Eiling et al. (2004), the outperformance of country-based diversification strategies relative to industry-based strategies has disappeared after the introduction of the Euro. As a consequence, fund managers should think through the full ramifications of seeking cost-effective diversification in the Euro area by adopting the passive strategy of investing in market indexes rather than a selection of stocks or industries from the whole supra-national market. More deeply, the dramatic increase in country level market index correlation rises the possibility of a ‘correlation puzzle’. The relevant question from the perspective of the informational efficiency of the market pricing mechanism is whether this increase in return correlation is justified by increased correlation in fundamentals and discount rates. Adjaouté and Danthine (2001) document a significant increase in correlations between Euro area country equity indices. However, they find the same increase after they adjust for currency effects, thus suggesting that the elimination of currency risk is not the main cause. De Santis et al. (in press) show similar results. While Adjaouté and Danthine (2004) report preliminary evidence of convergence of economic fundamentals such as gross domestic product growth rates, little or no direct evidence is available on discount rates and on equity fundamentals such as dividend growth rates. Expanding this body of evidence is a fruitful area for future research.