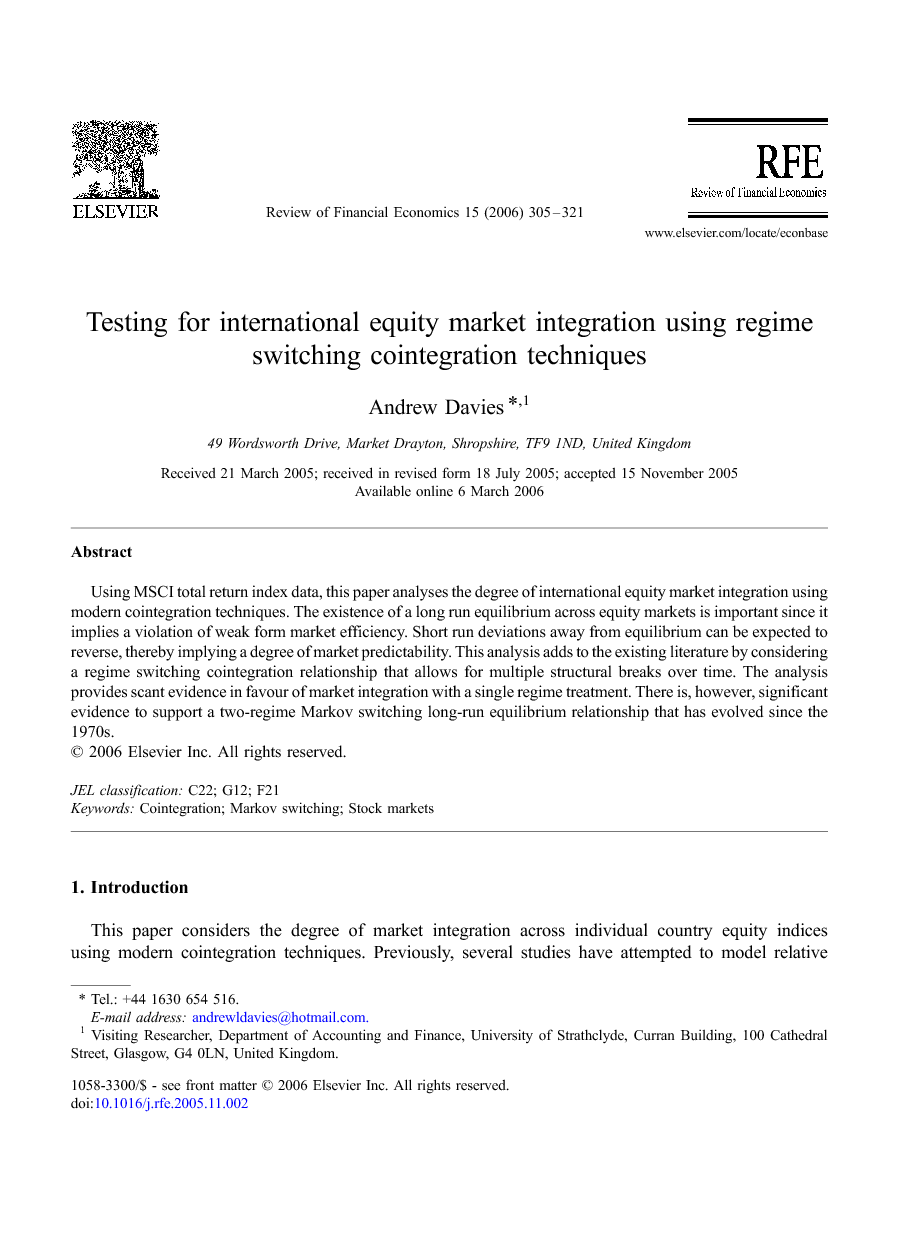 Using MSCI total return index data, this paper analyses the degree of international equity market integration using modern cointegration techniques. The existence of a long run equilibrium across equity markets is important since it implies a violation of weak form market efficiency. Short run deviations away from equilibrium can be expected to reverse, thereby implying a degree of market predictability. This analysis adds to the existing literature by considering a regime switching cointegration relationship that allows for multiple structural breaks over time. The analysis provides scant evidence in favour of market integration with a single regime treatment. There is, however, significant evidence to support a two-regime Markov switching long-run equilibrium relationship that has evolved since the 1970s.

This paper considers the degree of market integration across individual country equity indices using modern cointegration techniques. Previously, several studies have attempted to model relative equity market performance using cointegration with the aim of identifying a long run equilibrium relationship to which individual indices can be expected to converge towards over time. The search for such relationships is motivated from the observation that increasing globalisation across national markets in conjunction with increasing capital mobility will have acted as a unifying force across financial markets. If cointegration is found to exist, then deviations of one market away from the aggregate market trajectory can be expected to reverse over the medium to longer term. Several authors, for example Kasa (1992), Corhay, Tourani Rad, and Urbain (1993) and Masih and Masih (2002), have argued that such long run cointegrating relationships do indeed exist implying that individual market indices are governed by a common global factor over the long run. In a related strand to the literature, researchers have also documented what have been termed Winner–Loser reversals, see Richards (1995) and Balvers, Wu, and Gilliland (2000). Here the conjecture holds that markets or individual equities that have experienced superior (inferior) performance can be expected to underperform (outperform) over the medium to longer term. Cointegration, in implying the existence of a long run equilibrium, complements the reversal literature in the sense that markets that have moved away from equilibrium can be expected to gravitate back towards that equilibrium given sufficient time. While arguments in favour of increased integration such as these have some appeal at a heuristic level there are equally compelling arguments at a deeper theoretical level to suggest that equity index cointegration is unlikely given the free movement of capital. Proponents of weak form market efficiency, for example Richards (1995), argue that cointegration is unlikely since the existence of a common long run equity market relationship implies that deviations away from equilibrium can be expected to reverse over the longer term. Cointegration, therefore, implies a violation of weak form market efficiency since knowledge of the long run equilibrium implies predictability of any market that has moved sufficiently far away from the long run relationship. A further implication of equity market cointegration concerns the potential benefits arising from diversification across international equity markets. If markets are indeed governed by a common long-term trend, the benefits of diversifying portfolios into international assets clearly becomes suspect. This follows because a common long run trend implies relatively high long-term cross-market correlations, thereby diluting any potential diversification benefit over the long run. Theoretical considerations aside, the empirical evidence so far as cointegration across equity markets is mixed. Previous empirical work has focused upon differences in tests for cointegration and several competing techniques have found alternative results depending upon the level of statistical sophistication employed. For example, Kasa (1992) and Corhay et al. (1993) find in favour of cointegration while Richards (1995) provides a dissenting view. All of these studies employ the Johansen (1988) system based approach to test for cointegration while Corhay et al. (1993) also use the Engle and Granger (1987) procedure. The difference across the findings of Richards (1995) and Kasa (1992) arise from the fact that Kasa (1992) uses asymptotic critical values to test for cointegration while Richards (1995) adjusts critical test statistics to allow for finite sample bias. Other studies have found differences in the level of cointegration depending upon the particular time period under consideration. Earlier studies find little evidence while later studies report evidence in the affirmative, see Blackman, Holden, and Thomas (1994) and Masih and Masih (2002). Blackman et al. (1994) use a combination of the Johansen (1988) and Engle and Granger (1987) procedures while Masih and Masih (2002) focus on the application of the Johansen approach paying particular attention to large outlying observations in the data history. Masih and Masih (2002) therefore draw particular attention to the fact that the Johansen procedure is heavily dependent on time series that exhibit few outlying observations. With the previous literature in mind this paper seeks to extend the analysis by using recently developed non-linear regime switching cointegration techniques over a data set spanning the early 1970s up to the present day. Interest in non-linear cointegration techniques has recently been sparked by techniques developed by Breitung and Gourieroux (1997) and Breitung (2001). In the present context, Li (2006) employs cointegration rank tests developed by Breitung (2001) to test for cointegration across equity markets for Australia, Japan, New Zealand, the UK and the US. The analysis finds considerable support for the market integration hypothesis once non-linear cointegration techniques are considered. The finding of Li (2006) coupled with the conclusion that there would seem to be some variation in the hypothesised cointegration of markets through time suggests that the application of regime switching techniques would seem to offer considerable promise as an analytical tool. From an econometric standpoint Gabriel, Sola, and Psaradakis (2002) demonstrate that regime switching cointegration is straightforward to apply using maximum likelihood techniques as in the spirit of Hamilton (1990). In the context of a stock price dividend relationship they demonstrate that standard unit root tests can be applied to test for cointegration where residuals have been obtained from a Markov switching cointegrating relationship. The contribution of this study is to build upon the insights offered by Li (2006) and explicitly model a regime contingent cointegrating relationship across the most actively traded equity indices over the last 35 years. The paper continues in the next section with a description of the data used in the analysis. Section 3 outlines the various estimation techniques used and Section 4 considers the empirical results. Section 5 concludes with a summary of the findings.

This paper considered the degree of international equity market integration using modern cointegration techniques. Initial results using linear single-regime techniques find scant evidence in favour of joint equity market co-movement over the longer term. However, once a regime treatment that allows for multiple structural breaks is included to model the central long run relationship, the evidence in favour of equity index integration is compelling. The finding that the regime generation process appears to be relatively stable lends further credibility to the approach. Recent advances in econometric practice have therefore yielded a result that contradicts weak form market efficiency and casts doubt on the merits of international diversification over the long run. Future extensions to the analysis could include a search for specific candidate variables that are able to explicitly capture the regime generation process.