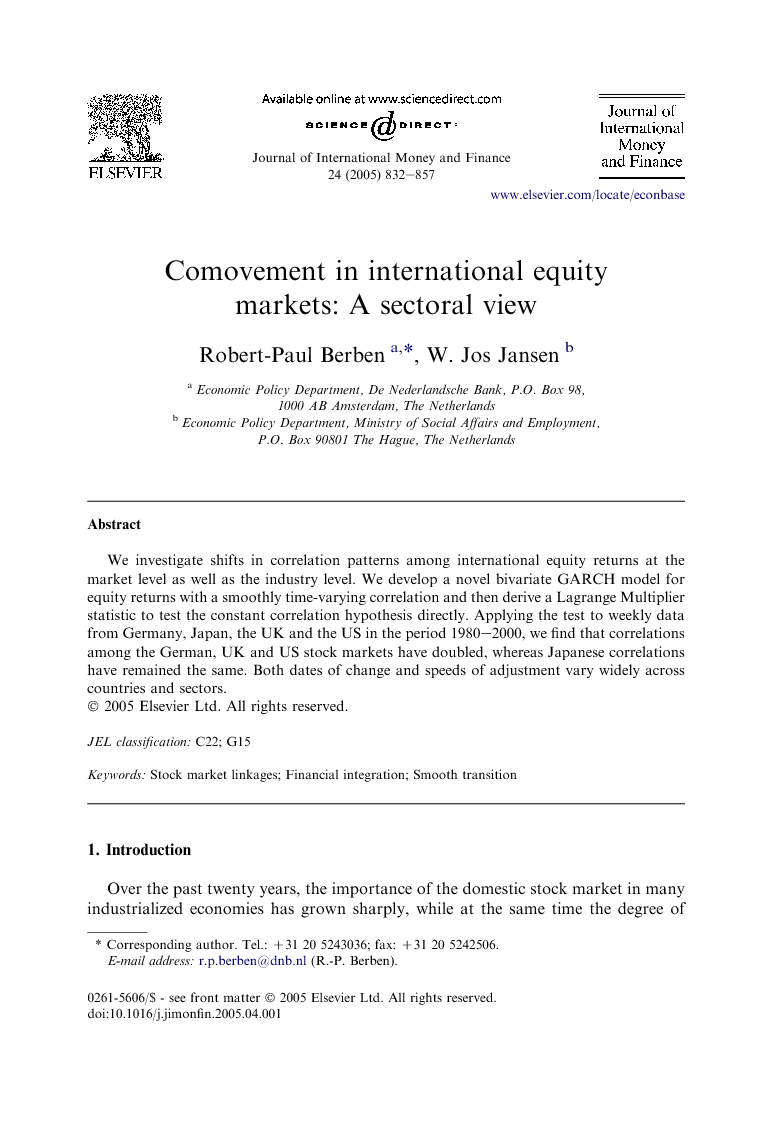 We investigate shifts in correlation patterns among international equity returns at the market level as well as the industry level. We develop a novel bivariate GARCH model for equity returns with a smoothly time-varying correlation and then derive a Lagrange Multiplier statistic to test the constant correlation hypothesis directly. Applying the test to weekly data from Germany, Japan, the UK and the US in the period 1980–2000, we find that correlations among the German, UK and US stock markets have doubled, whereas Japanese correlations have remained the same. Both dates of change and speeds of adjustment vary widely across countries and sectors.

In this paper, we focus on two important questions regarding the correlation among international equity returns. First, has there has been a structural increase in the degree of comovement among the world's most important stock markets – Germany, Japan, the UK and the US – over the past 20 years? And if so, at what moment did the change occur, and how long was the transition phase? Second, is the higher degree of comovement a broad-based phenomenon across industries, or is it possible to identify a group of sectors that appears to drive the process of deepening international stock market integration? To answer the two questions, we formulate a novel bivariate GARCH model for international equity returns with a smoothly time-varying correlation, and then derive a Lagrange Multiplier (LM) statistic to test the constant correlation hypothesis directly. Our procedure avoids the statistical deficiencies which often afflict other approaches in the literature, since both the date of change and the speed of the transition are endogenous. We apply the LM test to the stock market linkages among Germany, Japan, the UK and the US, using weekly stock prices for the market index and 10 industry indices between January 1980 and June 2000. Our main findings can be summarized as follows. Correlations among the German, UK and US stock markets have more than doubled, from around 0.30 to around 0.65 between 1980 and 2000. By contrast, correlations between the Japanese stock market and the other three markets have remained unchanged at 0.30 in this period. Correlation behavior at the aggregate level broadly reflects similar behavior at the industry level. Among Germany, the UK and the US, cross-country industry correlations have either gone up or remained the same, while for Japan the sectoral correlations overwhelmingly have not changed. There is no empirical evidence for the notion that a specific group of sectors plays a dominant part in the process of growing stock market integration. In short, we thus find a statistically significant broad-based increase in stock market comovement among Germany, the UK and the US, while the trend towards stock market integration seems to have bypassed Japan. Our estimation results point to a great variety in timing and speed of the correlation shifts across the bilateral stock market linkages, both at the market level and the industry level. For instance, the correlation between the returns on the market indices of the UK and the US gradually rose throughout the sample period, while that between the German and US markets increased sharply in the second half of the 1990s. This finding suggests that the structural shift towards a greater degree of comovement among international stock markets is not solely governed by global factors (such as advances in information technology, financial innovation and greater trade interdependence), but that country- and industry-specific factors also have a substantial impact. Relevant country-specific factors may be differences in transaction costs across exchanges and differences in information costs as a result of differences in listing requirements and accounting standards. The implications of our research for investors are that optimal portfolios have changed as a result of the correlation shifts. Because the correlations among the German, UK and US stock markets have greatly increased, whereas the correlations between Japanese stock market and the other three stock markets have not, the weight of Japanese stocks in the optimal portfolio has tended to increase over time at the expense of German, UK and US stocks.27 For policy makers, significantly higher correlations mean that equity market disturbances in one country are more likely to be transmitted to other countries, which may have adverse consequences for the stability of the global financial system. International stock market spillovers have also become more significant as the link between stock market and real economy has intensified, for example because of greater share holdings by households. Our finding of widely varying dates and speeds of structural change is a strong reminder that a flexible approach to modeling structural change really pays dividends. This is an important lesson for future research. However, our methodology still contains some important restrictive elements, in particular the strict monotonicity of correlation change. Relaxing these restrictions is an interesting topic for future research. Within our basic setup, monotonicity can be replaced by richer time-patterns in two ways. The first one is the introduction of more than two correlation regimes, which allows hump-shaped patterns. The second one is not to use time as the transition variable, but a measure of interdependence, for instance international trade patterns. As such variables may not be necessarily monotonic, this also introduces the possibility of non-monotonic change. An additional advantage of this approach is that it may shed some light on the underlying causes of long-run changes in the degree of stock market comovement. Finally, a natural extension of our analysis is to estimate a single multivariate STC-GARCH model instead of a series of bivariate STC-GARCH models.