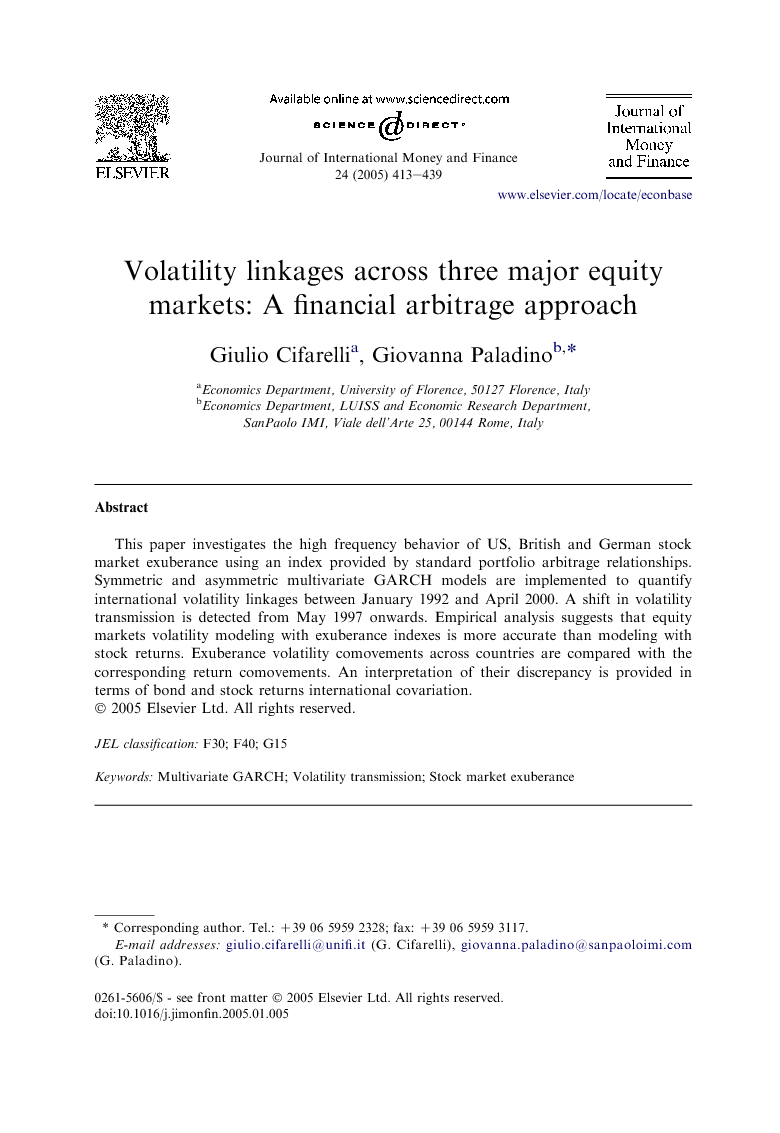 This paper investigates the high frequency behavior of US, British and German stock market exuberance using an index provided by standard portfolio arbitrage relationships. Symmetric and asymmetric multivariate GARCH models are implemented to quantify international volatility linkages between January 1992 and April 2000. A shift in volatility transmission is detected from May 1997 onwards. Empirical analysis suggests that equity markets volatility modeling with exuberance indexes is more accurate than modeling with stock returns. Exuberance volatility comovements across countries are compared with the corresponding return comovements. An interpretation of their discrepancy is provided in terms of bond and stock returns international covariation.

Standard multivariate GARCH models are essentially descriptive, while economic and financial interpretations are usually superimposed a posteriori. In this paper, we introduce an ex ante structure—defining an arbitrage free stock return—and assess whether the ensuing restrictions are corroborated by the empirical evidence for three major equity markets. Multivariate symmetric and asymmetric GARCH models are estimated in order to investigate the daily volatility in the January 1992–April 2000 period. Second-moment linkages between the US, British and German stock markets are examined using an exuberance index derived from standard portfolio arbitrage relationships. We provide a definition of exuberance, although the mechanism that may trigger it is beyond the scope of our investigation. The main finding of the paper is that volatility transmission across countries is mostly accounted for by stock market exuberance, i.e., return covariances are de facto, exuberance covariances. Moreover, volatility modeling with exuberance indexes seems to be more accurate than modeling with stock returns. Two subperiods are identified due to a shift in the pattern of volatility transmission in May, 1997. The successive bouts of financial turbulence occurring since May, 1997 result in an increase in the conditional second moments of the exuberance indexes and a significant rise in their covariation across markets. Market interlinkages rise in periods of uncertainty as fads and herd behavior effects loom large even in sophisticated markets. Standard return volatility analysis seems to overestimate (underestimate) cross-market linkages in periods of low (high) volatility. However, investigation into the cross-country comovements of bonds and stocks yields ex ante information that may be of use, via analysis of exuberance indexes, in reducing portfolio risk. The introduction of exuberance indexes in dynamic portfolio hedging creates scope for further research. Acknowledgement The authors are grateful to Emilio Barone and especially to the anonymous referee for extremely useful and constructive suggestions. The authors remain solely responsible for any error contained herein.