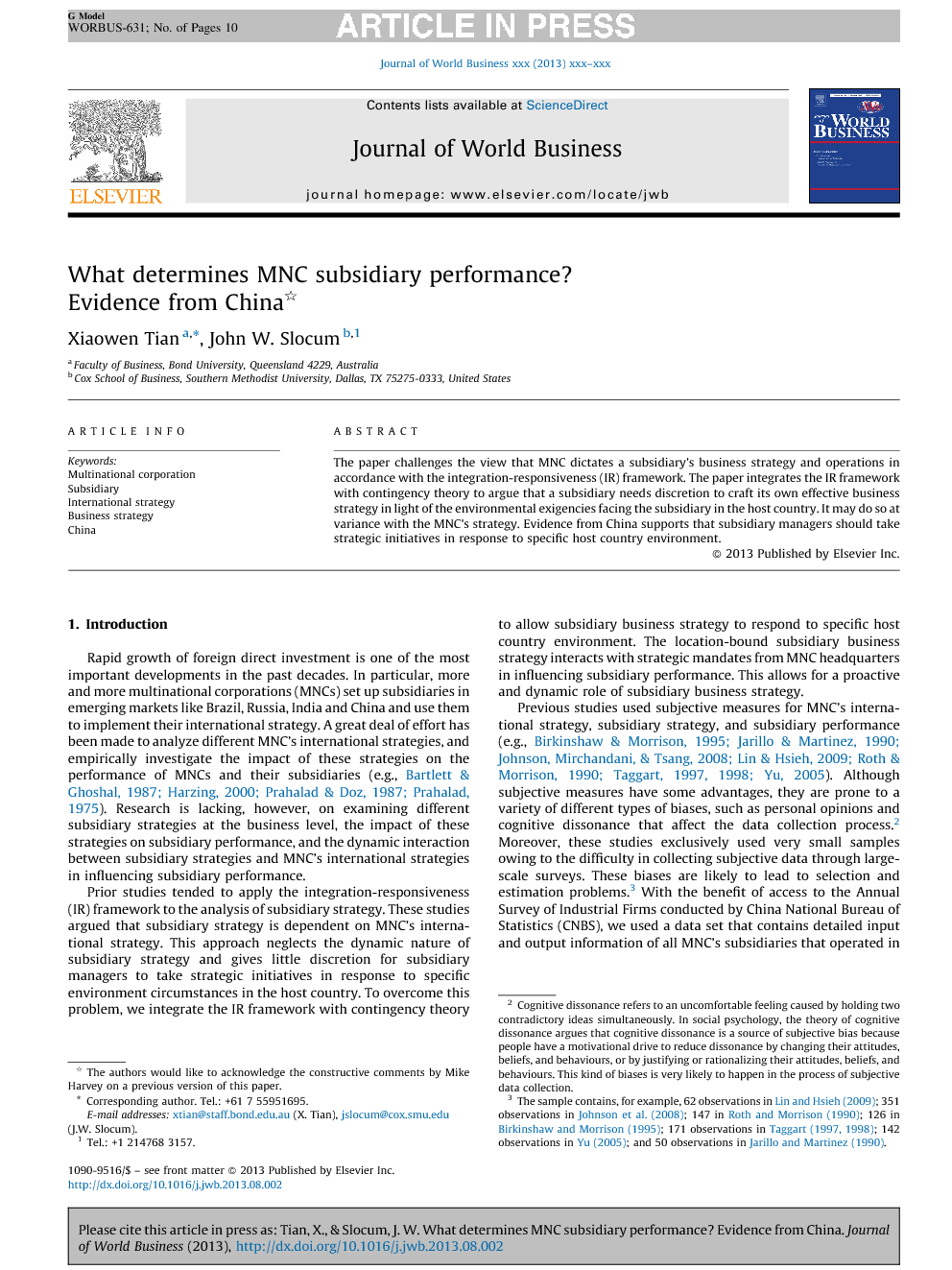 The paper challenges the view that MNC dictates a subsidiary's business strategy and operations in accordance with the integration-responsiveness (IR) framework. The paper integrates the IR framework with contingency theory to argue that a subsidiary needs discretion to craft its own effective business strategy in light of the environmental exigencies facing the subsidiary in the host country. It may do so at variance with the MNC's strategy. Evidence from China supports that subsidiary managers should take strategic initiatives in response to specific host country environment.

Rapid growth of foreign direct investment is one of the most important developments in the past decades. In particular, more and more multinational corporations (MNCs) set up subsidiaries in emerging markets like Brazil, Russia, India and China and use them to implement their international strategy. A great deal of effort has been made to analyze different MNC's international strategies, and empirically investigate the impact of these strategies on the performance of MNCs and their subsidiaries (e.g., Bartlett and Ghoshal, 1987, Harzing, 2000, Prahalad and Doz, 1987 and Prahalad, 1975). Research is lacking, however, on examining different subsidiary strategies at the business level, the impact of these strategies on subsidiary performance, and the dynamic interaction between subsidiary strategies and MNC's international strategies in influencing subsidiary performance. Prior studies tended to apply the integration-responsiveness (IR) framework to the analysis of subsidiary strategy. These studies argued that subsidiary strategy is dependent on MNC's international strategy. This approach neglects the dynamic nature of subsidiary strategy and gives little discretion for subsidiary managers to take strategic initiatives in response to specific environment circumstances in the host country. To overcome this problem, we integrate the IR framework with contingency theory to allow subsidiary business strategy to respond to specific host country environment. The location-bound subsidiary business strategy interacts with strategic mandates from MNC headquarters in influencing subsidiary performance. This allows for a proactive and dynamic role of subsidiary business strategy. Previous studies used subjective measures for MNC's international strategy, subsidiary strategy, and subsidiary performance (e.g., Birkinshaw and Morrison, 1995, Jarillo and Martinez, 1990 and Johnson et al., 2008Lin and Hsieh, 2009, Roth and Morrison, 1990, Taggart, 1997, Taggart, 1998 and Yu, 2005). Although subjective measures have some advantages, they are prone to a variety of different types of biases, such as personal opinions and cognitive dissonance that affect the data collection process.2 Moreover, these studies exclusively used very small samples owing to the difficulty in collecting subjective data through large-scale surveys. These biases are likely to lead to selection and estimation problems.3 With the benefit of access to the Annual Survey of Industrial Firms conducted by China National Bureau of Statistics (CNBS), we used a data set that contains detailed input and output information of all MNC's subsidiaries that operated in China and reported to CNBS. This allowed us to construct objective measures for a large sample of subsidiaries (Tian, 2010). Our paper is organized as follows. In the next section, we explain the necessity of integration of the IR framework with contingency theory in research on the relationship between MNC's international strategy and subsidiary business strategy. In Section 3, we propose some hypotheses for empirical investigation. In Section 4, we describe the methodology and data used in hypothesis test. In Section 5, we discuss the findings of the study. Section 6 concludes the paper.