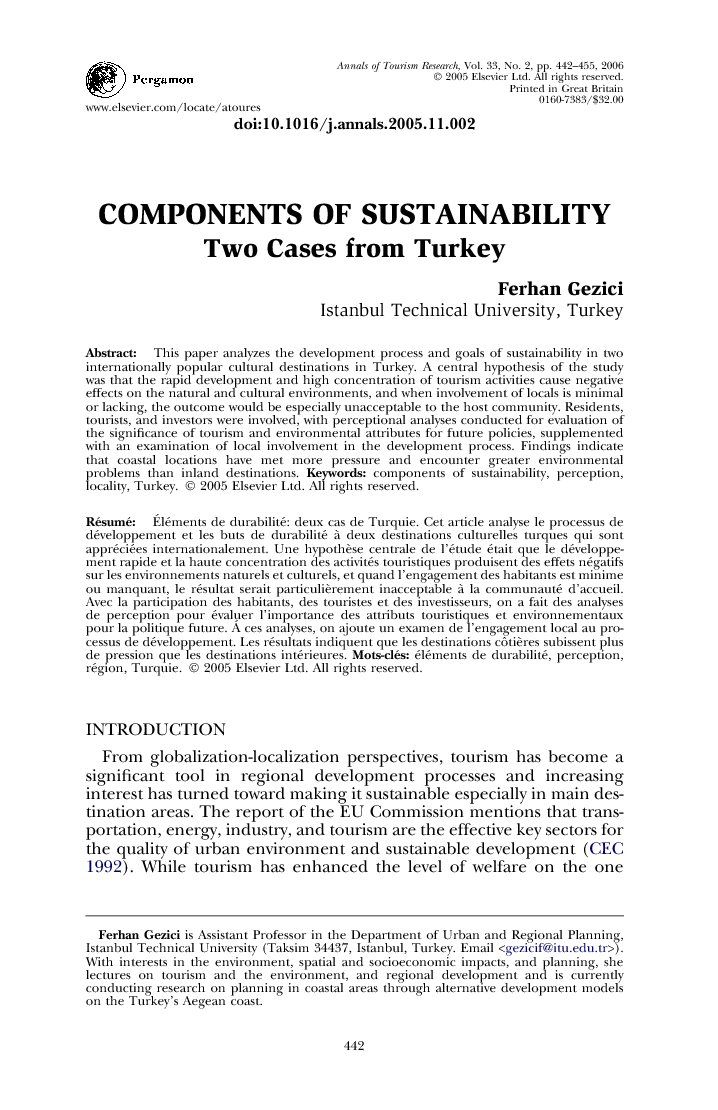 This paper analyzes the development process and goals of sustainability in two internationally popular cultural destinations in Turkey. A central hypothesis of the study was that the rapid development and high concentration of tourism activities cause negative effects on the natural and cultural environments, and when involvement of locals is minimal or lacking, the outcome would be especially unacceptable to the host community. Residents, tourists, and investors were involved, with perceptional analyses conducted for evaluation of the significance of tourism and environmental attributes for future policies, supplemented with an examination of local involvement in the development process. Findings indicate that coastal locations have met more pressure and encounter greater environmental problems than inland destinations.

Research on the impact of tourism activities at the local level shows that the performance should not be measured only for its economic assets, but also for its social and environmental concerns over the long run. A sustainable tourism model, including the satisfaction of the community, tourists, and investors/managers could yield some explicit environmental ethical premises. In this paper, the perceptions of different components or actors on tourism through sustainable development have been emphasized. Sustainable development should involve environmental concerns and local contributions when a region gets economic gains from tourism activities. In this case, all components (actors) have emphasized that tourism activities should depend on environmental resources. This is an indicator of the increasing awareness of environmental attributes among the components. Another significant conclusion is the importance of locality during the development processes. When activities could not be controlled by the local community, environmental and socioeconomic integration problems appeared in the destination areas. A high concentration and large-scale development of tourism are unacceptable for the host community and a risk for sustainability. But if local entrepreneurship is not enough for stimulating development, a destination needs entrepreneurs from outside the region. On this point, there is a dilemma about the destination areas. Should they wait for support from outside or should they involve themselves in considering the development over the long run? Further, another subject of research might be to decide which types of tourism and development could be more compatible with sustainability in a destination area. Although every destination has its own unique features, there should be common limits of acceptable changes as well. Mass tourism exists in high concentration and with large-scale development along coastal areas in Side, while there is a considerable increase in alternative activities in Urgup. As a result of this comparative study, coastal areas show more rapid development due the priority policy for coastal and mass tourism in Turkey. Thus, it is obvious that coastal destination areas have encountered more pressure and more intensive environmental problems. These cases in Turkey highlight similar trends and problems of other Mediterranean countries especially for the coastal destinations. However, Turkey has an opportunity to observe the experiences of other Mediterranean countries in advance. Therefore, the policy should focus on tourism activities in coastal areas and in inland areas which have important attractions. The environmental problems, which are generated by mass tourism especially in significant destination areas, need new approaches and management. Still, the regions of tourism activities are filled with hope for the conservation of both the natural and cultural environment as noted in the hypothesis. Further research should focus on new tourism demands, diversity of attractions, and possible networks of destinations in the region. It is expected that high concentration and environmental problems might be decreased, providing sustainability of tourism and alternative developments in different destinations. While orienting supply and demand and creating new markets, local actors should not be neglected. Each region has to know and improve its potential and define limits of acceptable change by involving all in the development process. This would give an opportunity to the local authorities to plan activities in their regions. Further research on the perceptions of different groups on tourism development would provide for the participation of all the actors in the process and improve the planning efforts in destination areas. Moreover, using a similar approach and methodology would lend itself to the development of new destinations.