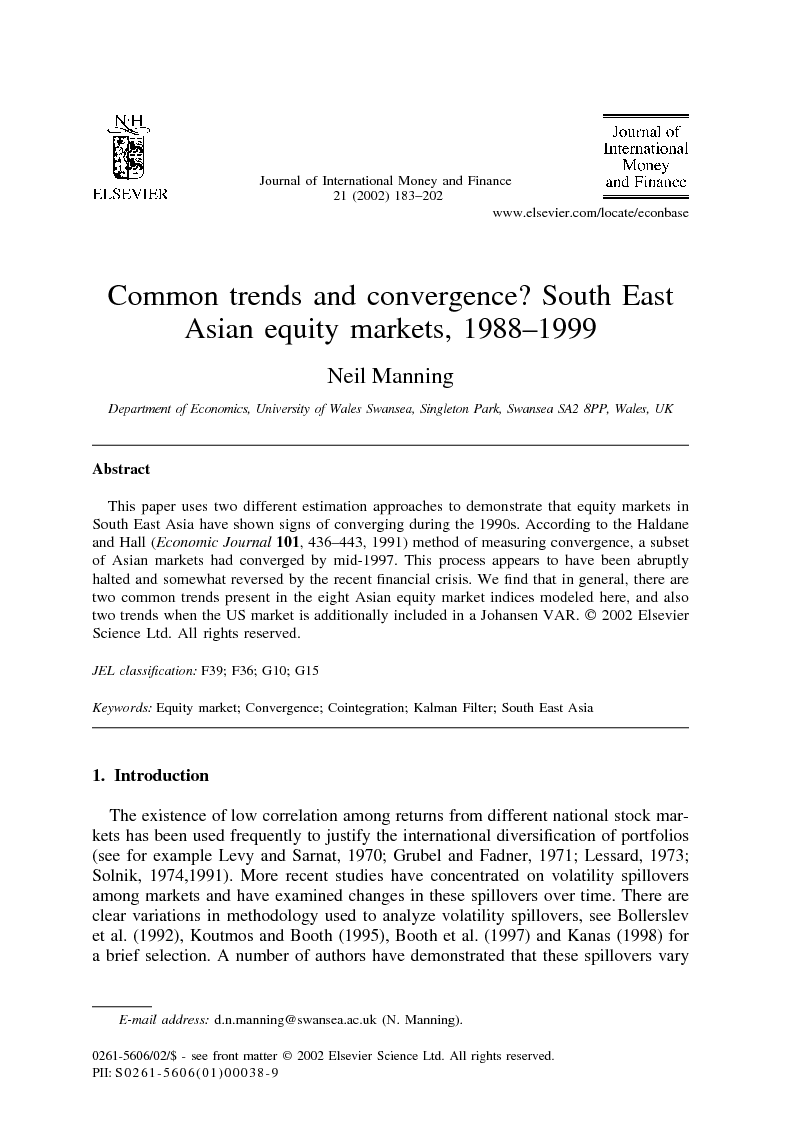 This paper uses two different estimation approaches to demonstrate that equity markets in South East Asia have shown signs of converging during the 1990s. According to the Haldane and Hall (Economic Journal101, 436–443, 1991) method of measuring convergence, a subset of Asian markets had converged by mid-1997. This process appears to have been abruptly halted and somewhat reversed by the recent financial crisis. We find that in general, there are two common trends present in the eight Asian equity market indices modeled here, and also two trends when the US market is additionally included in a Johansen VAR.

This paper has analyzed data from nine Asian equity markets sampled at weekly and monthly frequencies over an 11-year period. Two very different methodologies have been applied and both techniques take into account the unit root properties of the data but address different, albeit related, economic issues. The Johansen maximum likelihood approach determines the number of cointegrating vectors, and therefore the number of common trends, which exist among these equity indices. If a single common trend is found, then arguably, convergence has already occurred. However, we find a minimum of two common trends in these data indicating partial convergence of the indices. In these circumstances, the Johansen approach says little about the dynamics of convergence although it clearly signals the interdependence of these markets. In fact, the Haldane and Hall Kalman Filter technique identifies two periods of convergence of the Asian markets, namely 1988–1990 and 1992–mid-1997; divergence occurring both in 1990–1992 and during the recent Asian crisis. It would also appear that a sub-sample of the Asian markets, which excludes Japan, Korea and Taiwan, had achieved a common relationship with the (external) US market by mid-1997. According to the Haldane and Hall measure of convergence, these markets had converged over the period mid-1992 to mid-1997. 15 However, this process was abruptly reversed by the onset of crisis, even though many Asian financial markets were rocked by the crisis almost contemporaneously. 16