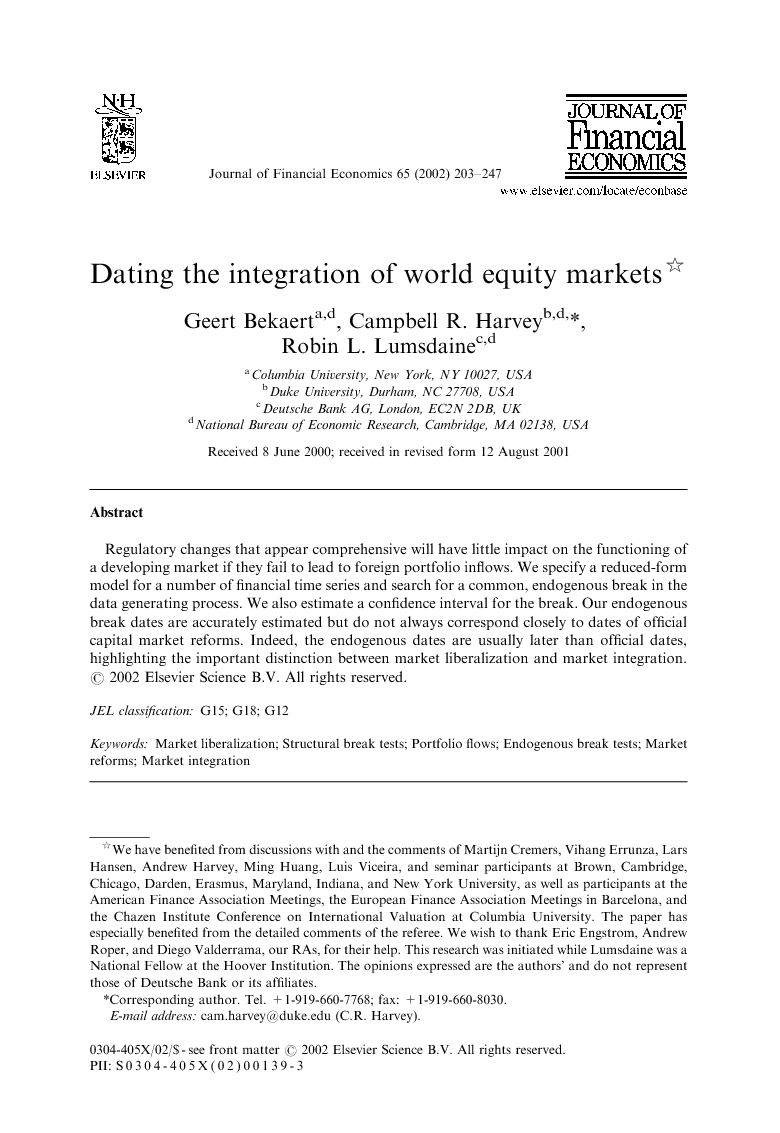 Regulatory changes that appear comprehensive will have little impact on the functioning of a developing market if they fail to lead to foreign portfolio inflows. We specify a reduced-form model for a number of financial time series and search for a common, endogenous break in the data generating process. We also estimate a confidence interval for the break. Our endogenous break dates are accurately estimated but do not always correspond closely to dates of official capital market reforms. Indeed, the endogenous dates are usually later than official dates, highlighting the important distinction between market liberalization and market integration.

In financially integrated markets, domestic investors are able to invest in foreign assets and foreign investors in domestic assets; hence, assets; of identical risk command the same expected return, regardless of trading location. Moving from a segmented regime to an integrated regime affects expected returns, volatilities, and correlations with world factors, all of which are important for both risk analysis and portfolio construction. Consequently, the concept of market integration is central to the international finance literature. Market integration also plays a key role in international and development economics. International economists, however, focus on the potential welfare gains of market integration, in terms of risk sharing benefits (see Cole and Obstfeld, 1992; Lewis, 1996; van Wincoop, 1994). In the development economics literature, Obstfeld (1994), Bekaert 2001a and Bekaert 2001b, and Henry (2000a) have started to trace the investment and growth benefits of financial market integration. The interplay between the financial sector and growth is examined in Devereux and Smith (1994) and Levine and Zervos (1996), among many others. With the opening of so many emerging markets in the last decade, history now offers a unique experiment to explore the economic and financial effects of market integration. Not surprisingly, a literature has developed attempting to measure the macroeconomic and financial effects of market integration (see Bekaert and Harvey 1995, Bekaert and Harvey 1997, Bekaert and Harvey 1998 and Bekaert and Harvey 2000; Aggarwal et al. 1999; De Santis and İmrohoroğlu, 1997; Richards, 1996; Levine and Zervos, 1996; Kim and Singal, 2000; Henry 2000a and Henry 2000b; Domowitz et al. 1997).1 But how do we measure the process of market integration? Indeed, how do we test the equilibrium models of risk sharing? How do we measure the growth effects of market integration? A prerequisite to these questions is the date that a market becomes integrated. The dating question is the subject of our research. The dating of market integration is difficult. The capital market liberalization process is a complex process and it is unlikely that “dates” of capital market reforms will correspond to the true date of market integration. For example, there are often ways to circumvent capital controls. Investors can access markets indirectly through American Depositary Receipts (ADRs) or country funds, even though the market is technically closed to foreign investors. Liberalization may occur in stages and be a gradual process. Finally, some policy changes may be anticipated well in advance while others lack credibility. There are potential solutions to these problems. One option is to specify a tightly parameterized model of the process of dynamic integration. For example, Bekaert and Harvey (1995) use a regime-switching framework to model gradual changes in market integration. However, these models are difficult to specify and are often statistically rejected. In addition, international asset pricing models typically fail to match the home asset preference that investors display, even when markets are seemingly perfectly integrated.2 In this paper, we offer an alternative approach that results in market liberalization dates, with confidence intervals, for 20 countries. Our methodology is new in two respects. First, in contrast to Bekaert and Harvey's (1995) focus on returns, we look at a series of financial and macroeconomic variables that are likely related to the integration process. For example, we consider net equity capital flows as well as variables such as dividend yields that may capture the permanent price effects that market integration entails. Indeed, returns are noisy in emerging markets and it is important to expand the scope of examination to other variables. Second, we do not take a stand on an asset pricing model, but simply assume that the variables before and after market integration follow a stationary process that is well described by a vector autoregression (VAR). Our methodology then exploits the new technique of Bai et al. (1998) to find endogenous break points for the VAR parameters. Since the model is in reduced form, it is important to let all parameters change. The methodology also yields a break date with a confidence interval. Interestingly, Bai et al. show that the confidence intervals around break dates can be tightened considerably by adding different series that break at the same time. One of the unique aspects of our research is that we simultaneously examine a number of economic time series in our search for structural breaks. The paper is organized as follows. In the second section, we describe the liberalization process and formulate formal hypotheses. The third section details the econometric methodology and examines the finite sample properties of the structural break identification procedure. The data are described in the fourth section. The fifth section contains our empirical results. We present both univariate and multivariate break points for the time series that we examine. The sixth section provides an economic interpretation of the statistical break points and discusses the effects of financial market integration on a wide range of financial and economic indicators. Some concluding comments and caveats are offered in the final section.

We study structural breaks in a host of financial and economic time series in 20 emerging markets. The methodology, developed in Bai et al. (1998), allows the determination of the break date with a 90% confidence interval. In contrast to previous empirical applications, we allow for all of the parameters in the regression to change at the break point. If the recent capital market liberalization process in emerging markets effectively integrated these markets into world capital markets, we expect the move from segmentation to integration to be accompanied by a significant break in a number of time series. We find strong evidence of structural breaks in emerging equity markets. The statistical significance of our results, and thus the precision of our dating exercise, is enhanced by allowing all parameters to break (rather than only the mean), by examining variables such as dividend yields which capture permanent price level changes (rather than only noisy returns data), and by examining multiple time series simultaneously. The confidence interval around our break dates is surprisingly tight given that the liberalization process is often complex and gradual. We find that integration brings about or is accompanied by an equity market that is significantly larger and more liquid than before, and stock returns that are more volatile and more correlated with world market returns than before. Integration is also associated with a lower cost of capital, an improved credit rating, a real exchange rate appreciation, and increased real economic growth. These results are based on cross-sectional averages and the dispersion in the changes in financial and economic time series across countries may be wide. We find no evidence of significant structural breaks in developed markets. Our dates should be useful for the rapidly growing body of literature studying the changes in emerging markets after liberalization. Consider three possible alternative measures of a break date: a date based on major regulatory reforms liberalizing foreign equity investments, the date of the announcement of the first ADR issue, and the date of the first country fund launching. Our endogenous structural break dates are mostly within three years of one of these dates, but the timeliness and identity of the closest exogenous break date varies greatly across countries. Generally, though, endogenous dates occur later than exogenous break dates and are most closely associated with ADR introductions. Allowing foreign investment does not appear to be sufficient to bring about market integration; foreigners still have to be willing to invest.