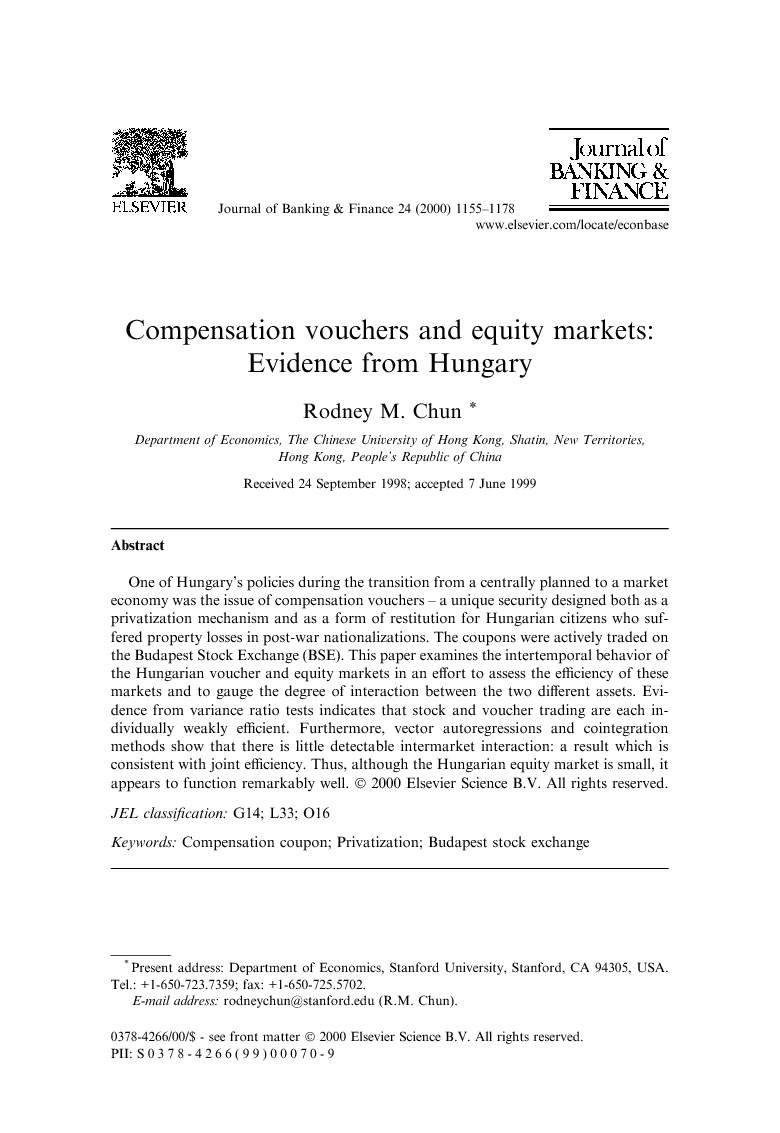 One of Hungary's policies during the transition from a centrally planned to a market economy was the issue of compensation vouchers – a unique security designed both as a privatization mechanism and as a form of restitution for Hungarian citizens who suffered property losses in post-war nationalizations. The coupons were actively traded on the Budapest Stock Exchange (BSE). This paper examines the intertemporal behavior of the Hungarian voucher and equity markets in an effort to assess the efficiency of these markets and to gauge the degree of interaction between the two different assets. Evidence from variance ratio tests indicates that stock and voucher trading are each individually weakly efficient. Furthermore, vector autoregressions and cointegration methods show that there is little detectable intermarket interaction: a result which is consistent with joint efficiency. Thus, although the Hungarian equity market is small, it appears to function remarkably well.

Among the many reforms implemented in transitional economies, the slowest changes have occurred in the area of financial market development. The banking sectors in most of these countries are still dominated by state-owned institutions while equity and bond markets typically remain small and illiquid. On the other hand, dramatic progress has been made in the privatization of state-owned enterprises and property, frequently through programs that included some form of freely distributed vouchers which were designed to facilitate the transfer of state assets to private ownership. In some countries such as Hungary and Russia, these vouchers were legally tradable in official security markets. The novelty of these markets raises the obvious question of whether voucher trading was efficient and whether such trading had an impact on nascent equity markets. The contribution of this paper is to shed light on these issues using data from the Budapest Stock Exchange (BSE). An analysis of the Hungarian voucher market is important for the design and formulation of policies in transitional economies that may be contemplating voucher privatization programs. For instance a fundamental question that has faced all of the economies using vouchers as part of a privatization scheme is the problem of coupon tradability. In particular, one would like to know whether unfettered voucher trade has occurred efficiently or whether informational asymmetries are so widespread in these countries that trading is perverse. Moreover, it is clear that the development of equity markets has been affected by choices regarding privatization methods Blommestein, 1998 and Nivet, 1997. Therefore, it is useful to use the Hungarian experience to examine potential interactions between voucher and equity trading. The fundamental question is: What are vouchers? On one hand, one could argue that they represent a (risky) claim to productive assets in the future. Viewed in this way vouchers might be considered as a type of equity or government bond.1 For example, after its aborted “second wave” voucher privatization attempt in 1995, the Slovak government explicitly converted outstanding vouchers to five-year bonds guaranteed by the Slovakian National Property Fund (NPF) (see EBRD, 1996). Since these bonds can be sold or used to buy shares of companies held by the NPF, they are functionally equivalent to tradable vouchers. On the other hand, it is possible that the public might perceive vouchers to be entirely divorced from fundamentals other than the behavior and commitment of the government. In this case, one would expect that voucher markets might operate in a quite different manner. For instance, early in the privatization process, there were concerns that the introduction of freely tradable vouchers would be seen by recipients as a (liquid) windfall of government transfers and would therefore exacerbate inflation via wealth effects.2 The remainder of the paper is organized as follows. Section 2 briefly discusses the development of the Hungarian equity and voucher markets. Section 3 provides a summary of the time-series methodology employed in this study and reviews previous applications of these techniques. Section 4 describes the data, followed by a presentation of results in Section 5. Finally, Section 6 concludes with a discussion and some closing remarks.

This paper has presented an array of time-series tests exploring the properties of the Hungarian stock market, with a particular emphasis on the interaction between equity and compensation voucher trading. The univariate evidence shows that the Hungarian equity and voucher markets are remarkably efficient. In particular, variance ratio tests indicate that the random walk model is a fitting description of the equity and voucher markets in Hungary. Furthermore, while stock indices from Western markets follow random walks, other recently-established Central European equity markets consistently reject the random walk hypothesis, implying violations of weak-form efficiency. Thus, in a comparative sense the Hungarian stock market behavior is closer to that of established markets than its peers. Factors that likely contribute to the BSE's efficiency are the presence of cross-listed firms and the participation of foreign investors. However, since vouchers were traded only in Budapest and foreign ownership of compensation vouchers was explicitly prohibited, these factors do not explain the efficiency of voucher trading. At the same time, it should be pointed out that it is also possible that the variance ratio tests are sensitive to the trading volume and that the indices from Hungary, Germany and Austria are simply composed of firms with higher volume.20 Based on the multivariate results, there is little indication of significant interaction between voucher and equity markets, despite the fact that vouchers often constituted an important part of the trading volume on the BSE. The Johansen procedure was unable to identify significant cointegrating vectors and the impulse responses from vector autoregressions show little influence either from stock returns to voucher returns or the other way around. Granger causality tests confirm that statistically there is no causation from stocks to vouchers. However, there appears to be some causation in the other direction, behavior which resembles bond and equity market interaction in developed markets. Overall, the bulk of the evidence points to several conclusions. First, there does not seem to be much detectable linkage between voucher and stock markets in Hungary, except for the extremely weak Granger causality from vouchers to stocks. This observation can be attributed to two possible relationships which cannot be exclusively identified. On one hand, the evidence is consistent with the notion that the pricing of these assets are jointly efficient: knowledge of one does not significantly improve forecasts of the other. On the other hand, another interpretation is that the lack of a significant cointegrating vector implies that there is no long-run equilibrium relationship between voucher and equity prices. This suggests that fundamentals that drive equity returns in Hungary are not affecting the voucher markets. Therefore, it appears that vouchers are deriving their value primarily from exogenous factors such as perceptions about future privatization policies and that these policies have only a limited effect on equity prices. Furthermore, the fact that voucher prices follow a random walk implies that this information was rapidly incorporated into the market. Thus, the Hungarian experience provides evidence that voucher tradability can occur efficiently and may not suffer significantly from major informational asymmetries. Second, despite the BSE's immaturity and the limited number of traded securities, the Hungarian stock exchange is extremely efficient at processing information. This has some bearing on the discussion about privatization policies and financial market development. Much of the research at the beginning of the transition expressed skepticism about the role of stock markets because of the belief that early markets would suffer from low liquidity and high volatility (Lipton and Sachs, 1990) or would be unable to cope with the noisy environment (Tirole, 1991). As a result, policy recommendations were biased towards the Western European model of universal banking with significant involvement of commercial banks in the oversight of privatized firms. As measured by market efficiency, Hungary’s experience is inconsistent with this view. Finally, an additional contribution of this paper is to show that while mass privatization is associated with the rapid formation of tradable securities, the stock markets created as a result of large-scale privatizations – the Czech and Slovak Republics in particular – are not efficient. One obvious interpretation is that the large number of listings created by rapid privatization results in relatively scattered and disbursed trading. This possibility was discussed in The World Bank (1996) World Development Report which notes that trading activity and share prices are lower in rapid privatizers because of low demand and weak institutions. In this respect, one lesson from Hungary is that the modest number of listed firms and the slower pace of stock market expansion is actually advantageous to efficient trading. Alternatively it may be the case that these younger exchanges require more time to mature and that the Budapest stock market has simply had a longer adjustment period. This question, however, is left for future research.