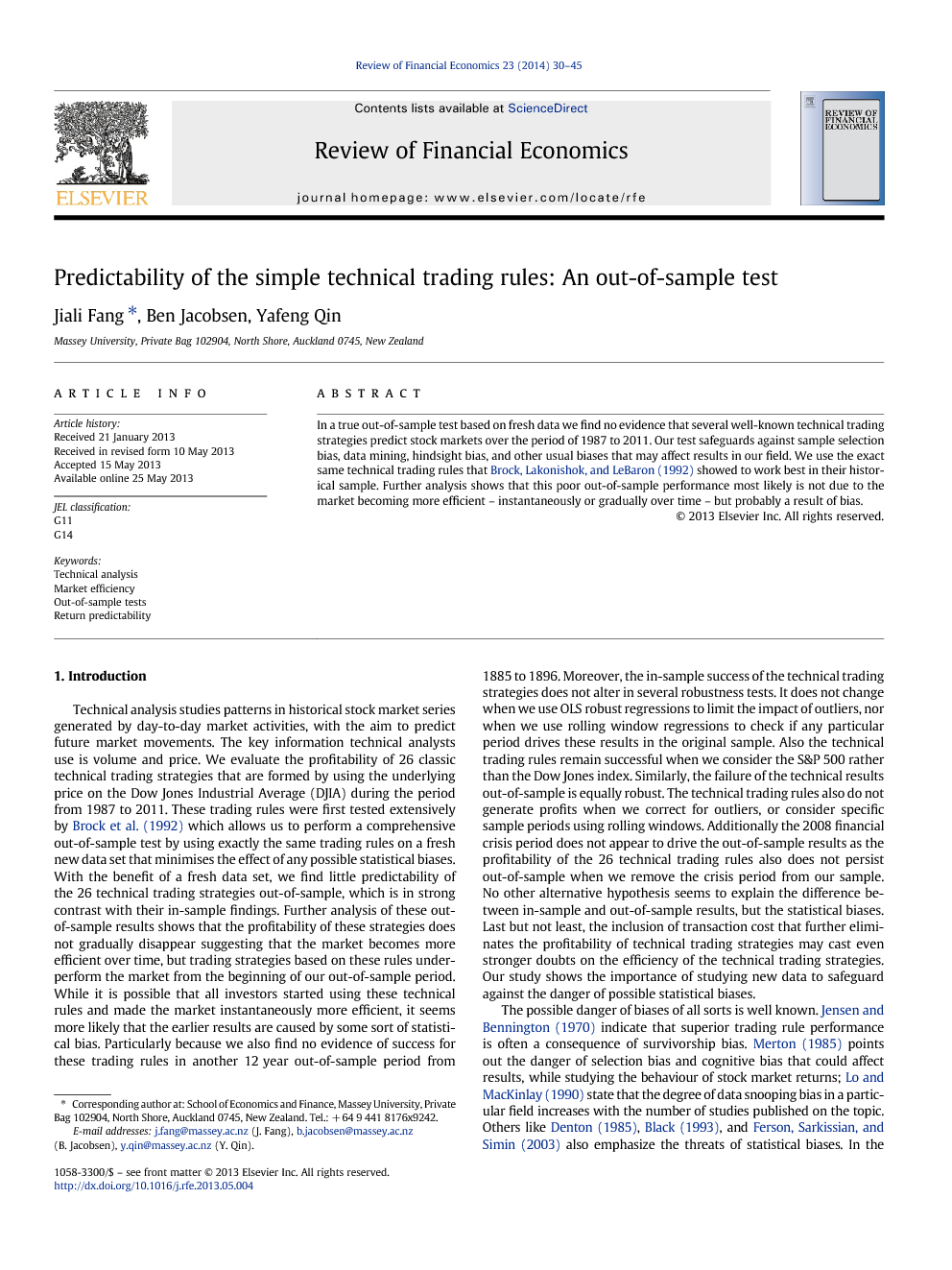 In a true out-of-sample test based on fresh data we find no evidence that several well-known technical trading strategies predict stock markets over the period of 1987 to 2011. Our test safeguards against sample selection bias, data mining, hindsight bias, and other usual biases that may affect results in our field. We use the exact same technical trading rules that Brock, Lakonishok, and LeBaron (1992) showed to work best in their historical sample. Further analysis shows that this poor out-of-sample performance most likely is not due to the market becoming more efficient – instantaneously or gradually over time – but probably a result of bias.

With the benefit of a fresh 25 year out-of-sample period we are able to perform a truly out-of-sample test of Brock et al. (1992). We find no evidence that 26 popular technical trading rules tested by Brock et al. (1992) have statistically significant predictability out-of-sample. The predictability is gone at the beginning of our 25 year sample, when their sample ends. As we also find no evidence in an earlier fresh sample from 1885 to 1896, it does not suggest that the market has become more efficient over time but it is more likely that statistical biases have caused the in-sample predictability result. Appendix A. Performance evaluations of the trading strategies on the DJIA 1987–2011 In this appendix we further evaluate the profitability of the technical trading strategies in comparison with a buy-and-hold strategy. For each trading strategy, we can either long on buy signals only, or otherwise invest in risk-free assets; or short sales on sell signals only, or otherwise invest in risk-free assets; or long on buy signals and short sales on sell signals and invest in risk-free assets when there is no trading signal. Table A gives the results comparing the Sharpe Ratios of the technical trading strategies and the buy-and-hold strategy on the DJIA from 1987 to 2011. The Sharpe Ratios are estimated by using: equation(A.1) View the MathML sourceSharpeRatio=rtp−rtf/σtp Turn MathJax on in which rtp represents the returns of technical trading strategies, rtf represents the risk free rate which is set as the US 3-month Treasury Bill rates and σp represents the standard deviation of rtp. We also perform the significance test examining the differences between the Sharpe Ratios of the technical trading strategies and the Sharpe Ratio of the buy-and-hold strategy. The significance test is performed according to the methodology proposed by Lo (2002) and De Roon, Eiling, Gerard, and Hillion (2011), which assumes that the excess returns rtp − rtf are i.i.d. normal.