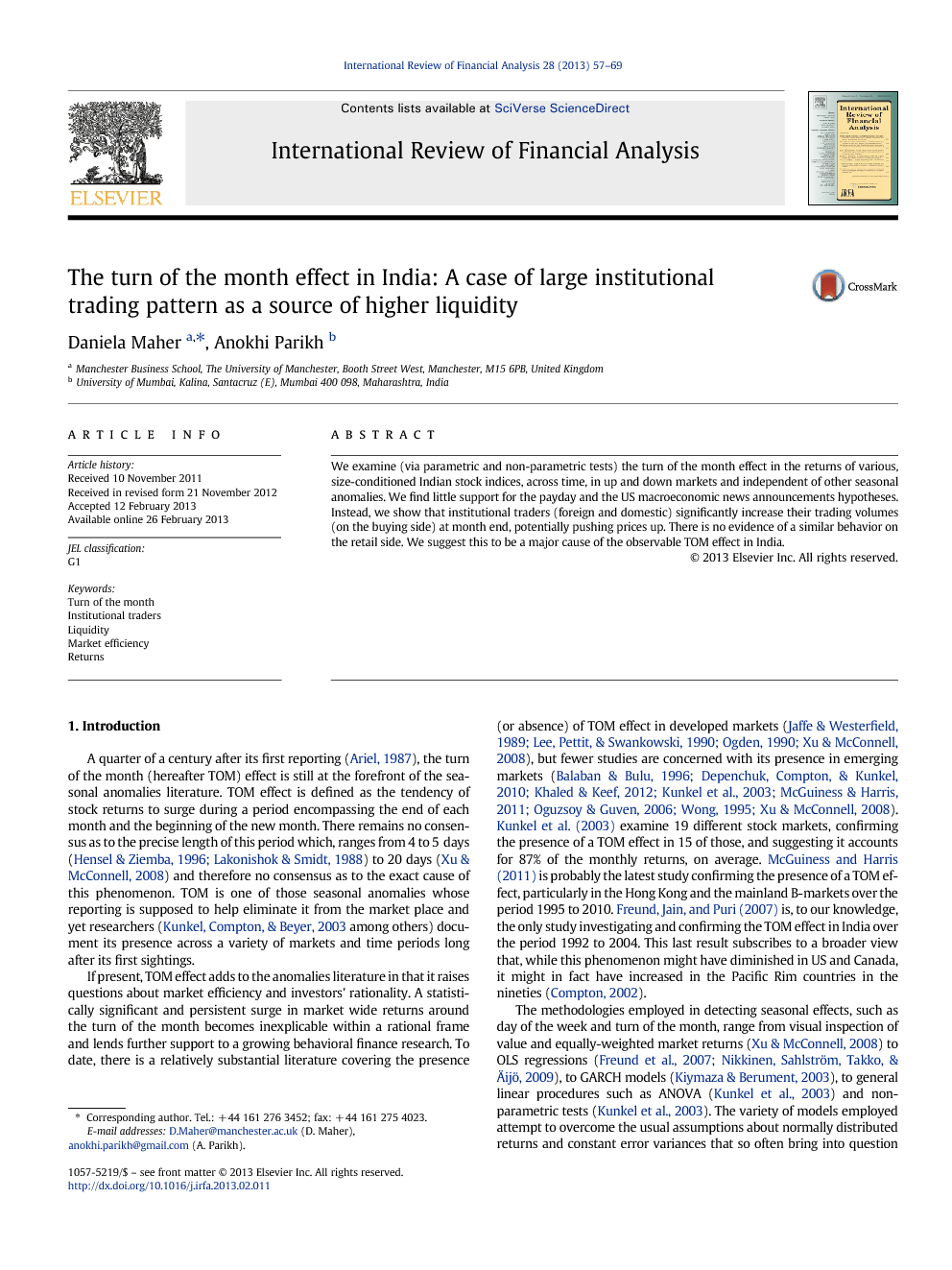 We examine (via parametric and non-parametric tests) the turn of the month effect in the returns of various, size-conditioned Indian stock indices, across time, in up and down markets and independent of other seasonal anomalies. We find little support for the payday and the US macroeconomic news announcements hypotheses. Instead, we show that institutional traders (foreign and domestic) significantly increase their trading volumes (on the buying side) at month end, potentially pushing prices up. There is no evidence of a similar behavior on the retail side. We suggest this to be a major cause of the observable TOM effect in India.

The purpose of this investigation was to test the presence of the turn of the month effect in stock returns in one of the most important emerging markets of the world, namely India, during its recent and most relevant past. We are able to confirm its presence across time (from 1991 for Sensex), various market capitalization indices, during rising but not falling markets and independent of other well known seasonal anomalies. The presence of TOM is confirmed by a variety of approaches, from visual inspection of the standardized daily returns of various indices to parametric and non-parametric techniques. Once confirmed, we turn to investigating the most common explanations of TOM effect in the literature. Given the highly erratic pay pattern in India, the payday hypothesis receives little support here. To the extent that individual investors prefer investment in small capitalization stocks, we should observe a surge in the BSE Smallcap volumes of trading at month end and yet, this is not confirmed. Equally, there is no evidence of a surge in the retail volumes of trading at month end, which further undermines the payday hypothesis. Similarly, we lend little support to the idea that TOM effect (defined here over the interval [− 1,+ 2]) is caused by the monthly release of US macroeconomic news announcements. The turn of the month effect we describe occurs entirely before the first of these announcements. We do however lend support to Barone's (1990) portfolio rebalancing hypothesis, stating that institutional investors structure their purchases at the end of the month in order to improve performance indicators that are published in the specialized press and normally calculated on the basis of end-of-the-month price. This strategy boosts demand for equities and pushes prices up. We are able to reinforce this idea based on evidence that both foreign and domestic institutional buying volumes increase significantly at month end, relative to their average for the rest of the month. This result is confirmed visually as well as by both parametric and non-parametric techniques. There is no consistent evidence that retail investors are engaged in a similar process. We also attempt to formally establish Granger causality between institutional volumes and returns. We obtain confirmation that, indeed, recent past volumes of institutional trading contain information for future returns and that there is a bidirectional relationship between institutional trading volumes and volatility. We also show that there is statistically significant evidence that higher institutional volumes at month end affect returns more than the average for the remaining days of the month. However, we recognize that the general relationship between volumes and returns is an intricate one that would require in itself singular attention. It is possible that, as the research concerning the link between volumes and returns advances, the role assumed by institutions through their enhanced trading at month end becomes clearer. What we can convincingly affirm here is that there is a turn of the month effect in India and that institutions do play an important role in the TOM effect we observe. The extent to which our explanation for the Indian TOM effect is valid in other countries remains the topic of future debate, as we are not aware of any other studies investigating institutional volumes of trading around the turn of the month.