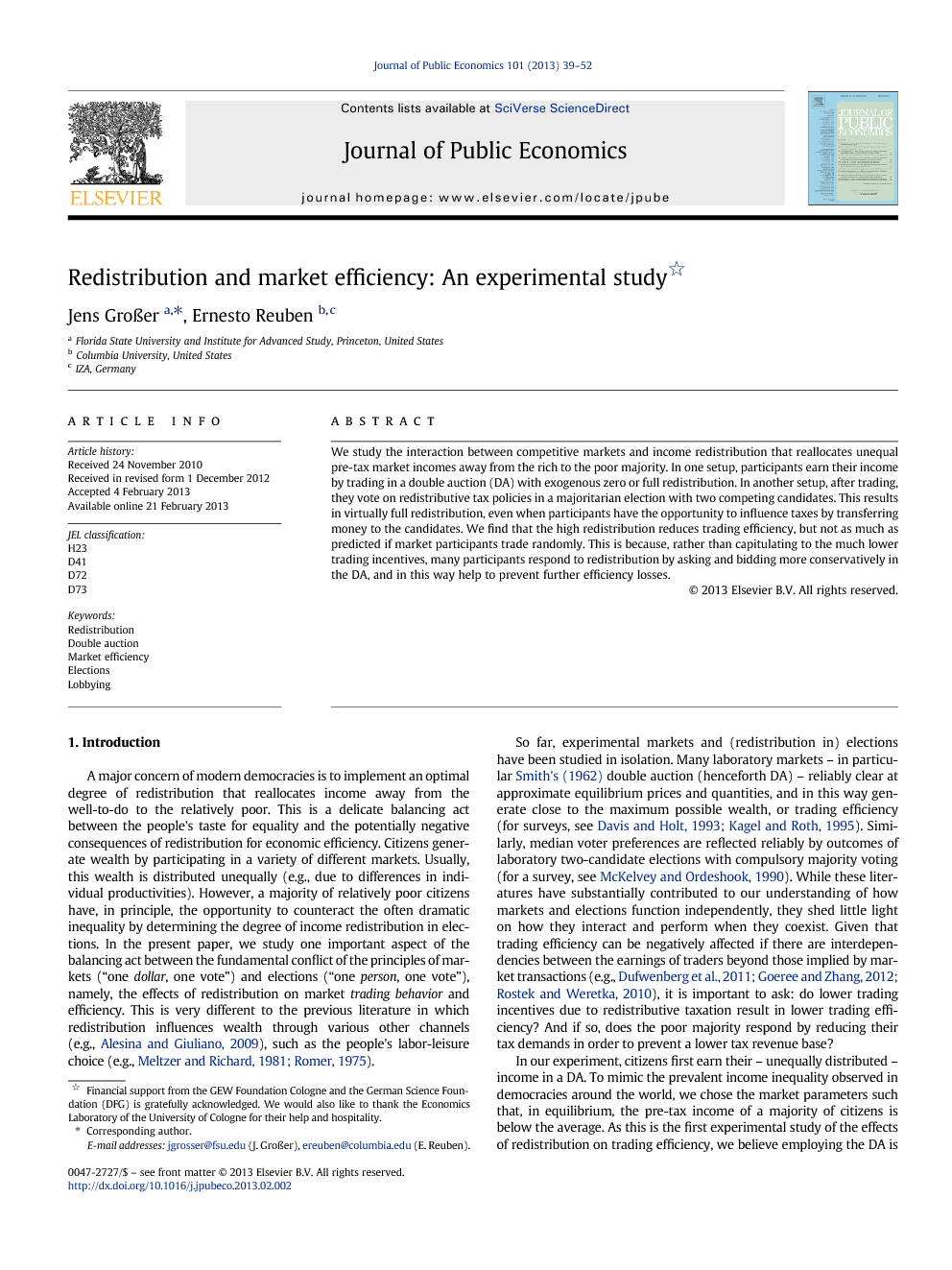 We study the interaction between competitive markets and income redistribution that reallocates unequal pre-tax market incomes away from the rich to the poor majority. In one setup, participants earn their income by trading in a double auction (DA) with exogenous zero or full redistribution. In another setup, after trading, they vote on redistributive tax policies in a majoritarian election with two competing candidates. This results in virtually full redistribution, even when participants have the opportunity to influence taxes by transferring money to the candidates. We find that the high redistribution reduces trading efficiency, but not as much as predicted if market participants trade randomly. This is because, rather than capitulating to the much lower trading incentives, many participants respond to redistribution by asking and bidding more conservatively in the DA, and in this way help to prevent further efficiency losses.

We experimentally study how income redistribution affects market behavior and, thus, the generation of economic wealth. We use a double auction (DA) where, in equilibrium, market outcomes create a rich minority and a poor majority. When we impose zero redistribution, the DA yields nearly maximum wealth (as in many previous DAs). By contrast, in the novel setup with exogenous full redistribution (i.e., the after-tax incomes will be the same for everyone), wealth drops noticeably, though not as much as predicted for random trading. We attribute the efficiency loss to lower trading incentives caused by high redistribution, which increases the variance of asks and bids and thereby increases the number of transactions involving inefficient units. However, interestingly, participants avoid the large efficiency loss seen with random trading by selling and buying more conservatively with than without redistribution, as predicted by our simple model in which rational players take into account that trading their own units can prevent the trade of more efficient units. To avoid a lower tax revenue base, sellers adjust their WTA above unit costs and buyers adjust their WTP below unit reservation values, which causes the more conservative pricing. In fact, this phenomenon should occur more generally in markets where traders benefit directly from overall market efficiency.30 We also examine endogenous income redistribution by having citizens vote on tax policies in a two-candidate majoritarian election. This allows us to gain insight into the mutual influences of redistribution and market efficiency. Consistent with median voter theories, we find that candidates woo the poor majority with very high taxes and citizens vote according to their pecuniary self-interest. As a result, after-tax incomes are virtually equal. Moreover, the effects we observe with exogenous full redistribution translate to behavior in the DA with endogenous redistribution, although they are weaker since (anticipated) winning taxes are on average somewhat smaller than one. This result does not change when, in addition to voting, citizens can influence tax policies by transferring money to the candidates. Our results show that the “one person, one vote” principle defeats that of “one dollar, one vote”, but at the loss of some trading efficiency. While we focus on the DA and a two-candidate majoritarian election, the advantage of our laboratory design is that, depending on the specific question at hand, it can be easily extended to accommodate different markets, elections, and ways in which they interact with each other. For example, an interesting next step could be to provide the rich with outside options such as tax migration or leisure opportunities, which might lower the poor's support of income redistribution and raise trading efficiency. Other interesting variations could be to study intermediate exogenous tax rates, rich majorities, and costs and reservation values obtained through real effort (as in Cason et al., 2011). Finally, one could facilitate coordination among participants to reach implicit or explicit agreements (as in Großer et al., forthcoming). Overall, our experiment can be seen as a first step to gain better knowledge of how income redistribution influences market behavior and efficiency. More generally, it provides insights into how the coexistence and interaction of markets and elections affect their functioning per se and the generation and distribution of wealth. A basic result of the present paper is that, all else held constant, redistribution negatively impacts trading behavior and efficiency, something that policymakers need to consider when choosing redistributive policies. For example, even if the labor supply is inelastic and therefore increasing taxes will not markedly reduce participation, high taxation could lead to inefficiencies because of price distortions that are driven by noisier trading.