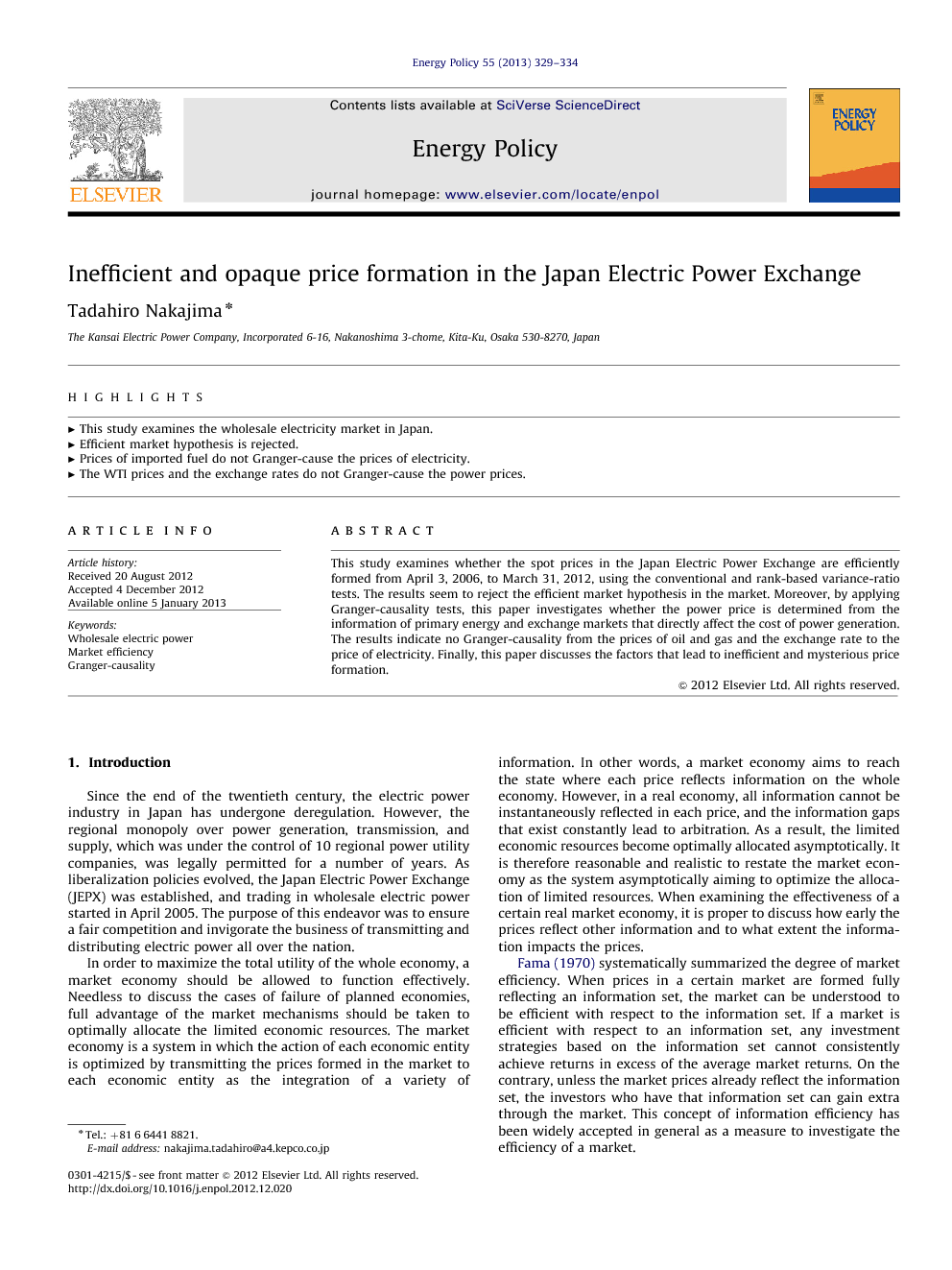 This study examines whether the spot prices in the Japan Electric Power Exchange are efficiently formed from April 3, 2006, to March 31, 2012, using the conventional and rank-based variance-ratio tests. The results seem to reject the efficient market hypothesis in the market. Moreover, by applying Granger-causality tests, this paper investigates whether the power price is determined from the information of primary energy and exchange markets that directly affect the cost of power generation. The results indicate no Granger-causality from the prices of oil and gas and the exchange rate to the price of electricity. Finally, this paper discusses the factors that lead to inefficient and mysterious price formation.

Since the end of the twentieth century, the electric power industry in Japan has undergone deregulation. However, the regional monopoly over power generation, transmission, and supply, which was under the control of 10 regional power utility companies, was legally permitted for a number of years. As liberalization policies evolved, the Japan Electric Power Exchange (JEPX) was established, and trading in wholesale electric power started in April 2005. The purpose of this endeavor was to ensure a fair competition and invigorate the business of transmitting and distributing electric power all over the nation. In order to maximize the total utility of the whole economy, a market economy should be allowed to function effectively. Needless to discuss the cases of failure of planned economies, full advantage of the market mechanisms should be taken to optimally allocate the limited economic resources. The market economy is a system in which the action of each economic entity is optimized by transmitting the prices formed in the market to each economic entity as the integration of a variety of information. In other words, a market economy aims to reach the state where each price reflects information on the whole economy. However, in a real economy, all information cannot be instantaneously reflected in each price, and the information gaps that exist constantly lead to arbitration. As a result, the limited economic resources become optimally allocated asymptotically. It is therefore reasonable and realistic to restate the market economy as the system asymptotically aiming to optimize the allocation of limited resources. When examining the effectiveness of a certain real market economy, it is proper to discuss how early the prices reflect other information and to what extent the information impacts the prices. Fama (1970) systematically summarized the degree of market efficiency. When prices in a certain market are formed fully reflecting an information set, the market can be understood to be efficient with respect to the information set. If a market is efficient with respect to an information set, any investment strategies based on the information set cannot consistently achieve returns in excess of the average market returns. On the contrary, unless the market prices already reflect the information set, the investors who have that information set can gain extra through the market. This concept of information efficiency has been widely accepted in general as a measure to investigate the efficiency of a market. Granger (1969) shows that one time series C Granger-causes another time series R if the previous value of C is useful to explain the current value of R. Acceptance of the Granger-causality hypothesis does not necessarily imply acceptance of a true causality hypothesis. Conversely, true causality must certainly bring about Granger-causality. In other words, the absence of Granger-causality can be understood as the absence of true causality. Therefore, a Granger-causality test is often undertaken to examine the factor of price formation. In a market economy, the more rapidly and widely markets process information, the better the improvement of performance of the whole economy become. Therefore, it is essential to examine the information processing ability of markets to evaluate the state of the market economy. This study examines the information processing capability of Japan's wholesale electricity market, which may significantly affect the overall performance of the Japanese economy. More specifically, this paper analyzes the degree by which the JEPX trading prices reflect the historical prices and the market information that impacts the cost of power generation directly. After the 2011 earthquake off the Pacific coast of Tohoku and the Fukushima Daiichi nuclear disaster, regulations on the electric power industry are being reviewed. The most important contribution of this study is the conclusion that the oil, gas, and exchange markets do not Granger-cause the JEPX, which is reached through a lag-augmented vector autoregression (LA-VAR) test after proving the inefficiency of the JEPX through a variance-ratio (VR) test to discuss how Japan's electricity market should be. The remainder of this paper is organized as follows. Section 2 explains the methodology applied, Section 3 describes the data analyzed, Section 4 presents the empirical results, and Section 5 provides a summary and statement of conclusions.

This study examined spot price formation in the JEPX from the beginning of fiscal year 2006 (April 3, 2006) to the end of fiscal year 2011 (March 31, 2012). Both the conventional VR tests developed by Lo and MacKinlay (1988) and the rank-based VR tests proposed by Wright (2000) denied the RWH lag-periods 2, 3, 4, 5, 10, 20, 30, and 40. In other words, past prices may be useful to forecast present and future prices. It was denied that the wholesale electricity prices in Japan are efficiently formed. The LA-VAR test developed by Toda and Yamamoto (1995) showed that neither the WTI futures prices nor the yen–US dollar exchange rates Granger-cause the JEPX power prices. Moreover, this test also revealed no Granger-causality from the yen-denominated prices of imported oil and gas to the wholesale electricity prices. In other words, power generation costs do not affect the wholesale electricity prices in Japan, because prices can be said to be unaffected by the historical information on the economic variables that directly affect the cost of power generation. Previous papers have examined Japan’s power market. However, tests have not been conducted to ascertain the efficiency of Japan’s wholesale electricity market. Given below are a few papers that examine Japan’s power market. For instance, Hasuike and Kanemoto (2005) proposed the simulation model as a primitive methodology to evaluate the degree of competition in a wholesale electricity market, in order to prepare a case study on Japan’s policy. Tanaka (2009) simulated the Japanese wholesale electricity market as a transmission constrained Cournot market by using a linear complementarity approach, in order to investigate the effects of upgrading a bottleneck transmission line and of splitting the largest electric power company. Nakajima (2010) estimated the income and price elasticity of residential electric power demand very accurately by using panel data. This study revealed that demand for electricity is price elastic and income inelastic. Hosoe and Takagi (2011) utilized auction data to examine the effect of deregulation. They argued that power charges decline when two or more providers bid at an auction. To the best of one’s knowledge, the only other studies to examine the efficiency of the wholesale electricity market are Uritskaya and Serletis (2008) and Alvarez-Ramirez and Escarela-Perez (2010). Uritskaya and Serletis (2008) analyzed two electricity markets, the Alberta in Canada and the Mid-Columbia in the US. The study revealed that both the markets are inefficient, with prices exhibiting complex multiscale correlated behavior. Alvarez-Ramirez and Escarela-Perez (2010) investigated two Canadian power markets, the Ontario and the Alberta. The results showed the existence of correlations in both demand and prices, exhibiting complex time-dependent behavior, with lower correlations in winter and higher in summer. The current study is consistent with these papers, indicating that it is probably difficult for the power market to accept the efficient market hypothesis, because electricity storage is too expensive and limited for effective arbitrage. Essentially, the power market tends to be potentially inefficient because of the following two features. First, the electric power industry is prone to under-supply, as it is a decreasing-cost industry requiring huge capital investment, it has a very long payout time, and it necessitates the building up of a large transmission grid for the public-good. Second, the arbitrage trading cost in electricity transactions is too high to contribute to liquidity, because it is difficult to change supply in response to price fluctuations, there are technological obstacles to the storage of electricity, and the trading volume is limited to the physical transmission that is constrained by the grid system. On the other hand, Table 4 presents the results of both conventional and rank-based VR tests for three typical US wholesale electricity markets in 2006, the PJM, Entergy, and Palo Verde. The test statistics are computed for lags 2, 3, 4, 5, 10, 20, 30, and 40—the same as the present study. Many RWH test statistics are not significant. However, the statistics provided by Lo and MacKinlay (1988) for the homoscedasticity assumption in Palo Verde tend to reject efficiency. Half of the test statistics in the PJM are significant. These results cannot strongly support efficiency, but cannot deny inefficiency either. Furthermore, some previous studies have also examined the Granger-causality between the power markets and fuel markets in the US. Emery and Liu (2002), Woo et al. (2006), and Brown and Yücel (2008) argued the Granger-causality from natural gas prices to wholesale electricity prices. Mohammadi (2009) indicated that not only gas prices but also coal prices Granger-cause power prices. According to previous studies, information on the fuel markets gets transmitted to wholesale electricity prices with some time lags in the US even if the market is inefficient. Given these two factors, an appropriate institutional design and skillful and experienced traders can rationalize the trading prices of wholesale power.