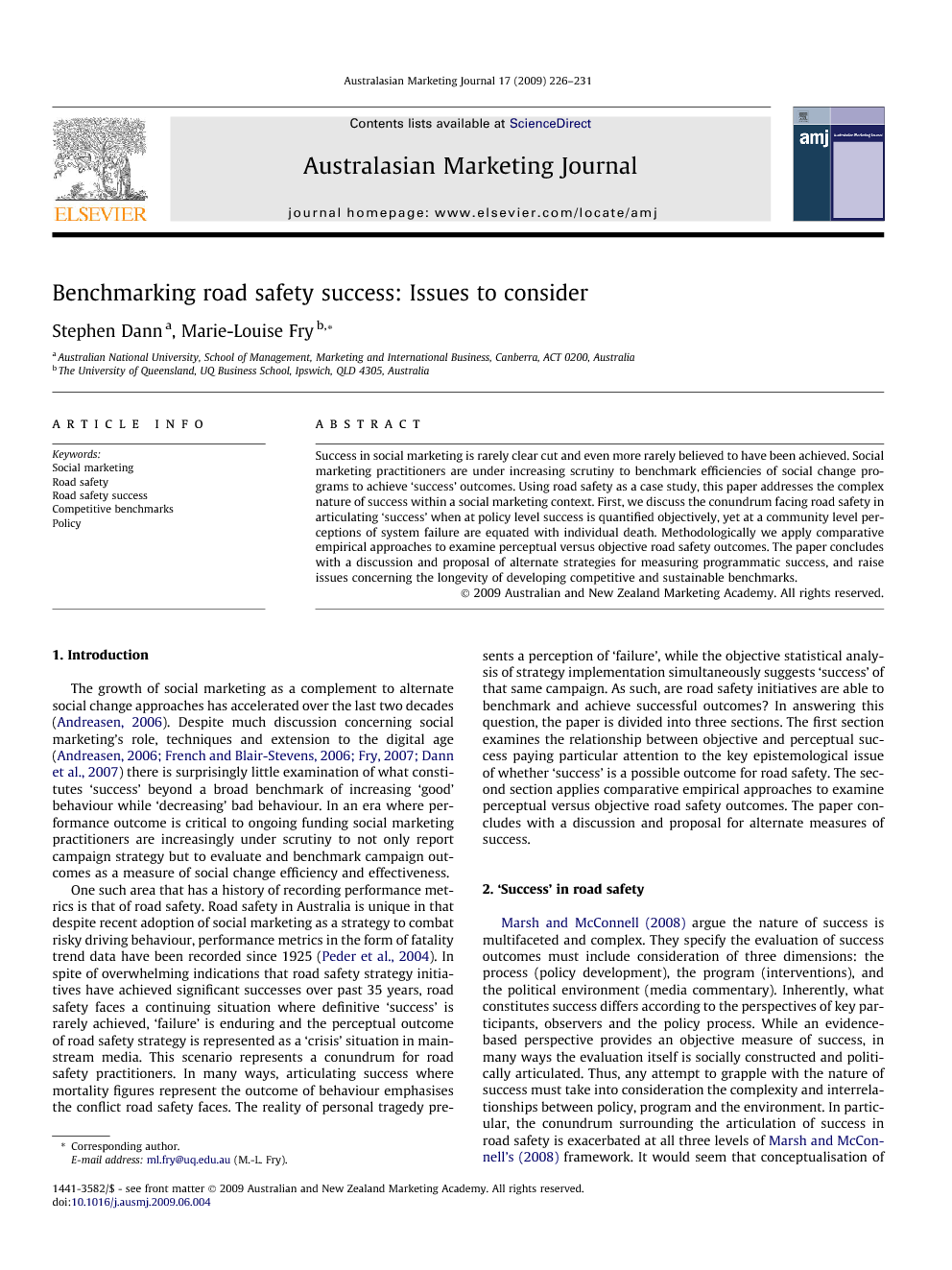 Success in social marketing is rarely clear cut and even more rarely believed to have been achieved. Social marketing practitioners are under increasing scrutiny to benchmark efficiencies of social change programs to achieve ‘success’ outcomes. Using road safety as a case study, this paper addresses the complex nature of success within a social marketing context. First, we discuss the conundrum facing road safety in articulating ‘success’ when at policy level success is quantified objectively, yet at a community level perceptions of system failure are equated with individual death. Methodologically we apply comparative empirical approaches to examine perceptual versus objective road safety outcomes. The paper concludes with a discussion and proposal of alternate strategies for measuring programmatic success, and raise issues concerning the longevity of developing competitive and sustainable benchmarks.

The growth of social marketing as a complement to alternate social change approaches has accelerated over the last two decades (Andreasen, 2006). Despite much discussion concerning social marketing’s role, techniques and extension to the digital age (Andreasen, 2006, French and Blair-Stevens, 2006, Fry, 2007 and Dann et al., 2007) there is surprisingly little examination of what constitutes ‘success’ beyond a broad benchmark of increasing ‘good’ behaviour while ‘decreasing’ bad behaviour. In an era where performance outcome is critical to ongoing funding social marketing practitioners are increasingly under scrutiny to not only report campaign strategy but to evaluate and benchmark campaign outcomes as a measure of social change efficiency and effectiveness. One such area that has a history of recording performance metrics is that of road safety. Road safety in Australia is unique in that despite recent adoption of social marketing as a strategy to combat risky driving behaviour, performance metrics in the form of fatality trend data have been recorded since 1925 (Peder et al., 2004). In spite of overwhelming indications that road safety strategy initiatives have achieved significant successes over past 35 years, road safety faces a continuing situation where definitive ‘success’ is rarely achieved, ‘failure’ is enduring and the perceptual outcome of road safety strategy is represented as a ‘crisis’ situation in mainstream media. This scenario represents a conundrum for road safety practitioners. In many ways, articulating success where mortality figures represent the outcome of behaviour emphasises the conflict road safety faces. The reality of personal tragedy presents a perception of ‘failure’, while the objective statistical analysis of strategy implementation simultaneously suggests ‘success’ of that same campaign. As such, are road safety initiatives are able to benchmark and achieve successful outcomes? In answering this question, the paper is divided into three sections. The first section examines the relationship between objective and perceptual success paying particular attention to the key epistemological issue of whether ‘success’ is a possible outcome for road safety. The second section applies comparative empirical approaches to examine perceptual versus objective road safety outcomes. The paper concludes with a discussion and proposal for alternate measures of success.