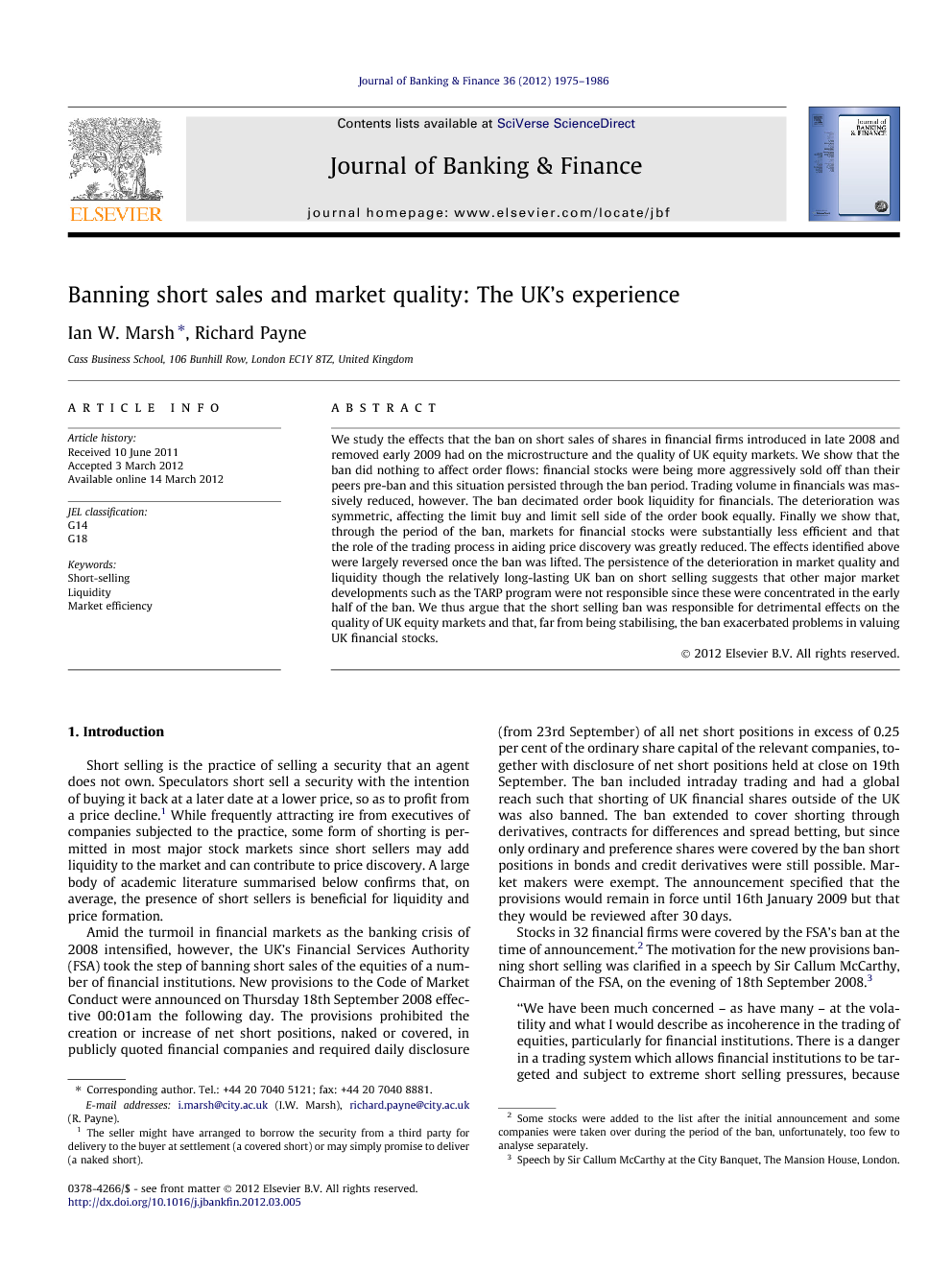 We study the effects that the ban on short sales of shares in financial firms introduced in late 2008 and removed early 2009 had on the microstructure and the quality of UK equity markets. We show that the ban did nothing to affect order flows: financial stocks were being more aggressively sold off than their peers pre-ban and this situation persisted through the ban period. Trading volume in financials was massively reduced, however. The ban decimated order book liquidity for financials. The deterioration was symmetric, affecting the limit buy and limit sell side of the order book equally. Finally we show that, through the period of the ban, markets for financial stocks were substantially less efficient and that the role of the trading process in aiding price discovery was greatly reduced. The effects identified above were largely reversed once the ban was lifted. The persistence of the deterioration in market quality and liquidity though the relatively long-lasting UK ban on short selling suggests that other major market developments such as the TARP program were not responsible since these were concentrated in the early half of the ban. We thus argue that the short selling ban was responsible for detrimental effects on the quality of UK equity markets and that, far from being stabilising, the ban exacerbated problems in valuing UK financial stocks.

In this paper we have examined the microstructure of UK stock markets between June 2008 and February 2009. This period spans the introduction and subsequent removal of new provisions to the Code of Market Conduct issued by the Financial Services Authority that banned the creation or increase of net short positions in publicly quoted UK financial companies. We have attempted to answer two key questions in this paper. First, was there any clear difference between the behaviour of financial stocks and set of control group stocks that might have motivated the FSA’s move to ban short-selling? Since figures in the FSA spoke of ‘‘incoherence’’ in stock markets and stated that ‘‘disorderly’’ conditions prevailed in the period prior to the ban’s introduction we might have expected to find evidence of abnormal conditions in the market for financial company stocks in the period before 18th September 2008. Second, what were the effects of the ban on short selling on market conditions in general, and on liquidity, efficiency, trading activity and price discovery in particular? As the ban on short selling was motivated by the existence of abnormal market conditions, we investigate whether there was an improvement in market conditions once the ban was in force. In short, we find no strong evidence that conditions in the market for financial stocks were any different to conditions for control group stocks in the period prior to the ban. Market quality indicators were deteriorating in late August-early September, but they were deteriorating for all stocks and not just for financial companies. Trading costs were rising and trading volumes were increasing for all stocks. Of course, stock prices were falling at this time and order flow was significantly negative as traders aggressively sold stocks, presumably both due to liquidation of long positions and short sales. But again, conditions were similar for financial and non-financial stocks making it hard to justify the intervention by the regulators designed specifically to affect only financial sector stocks. The effect of the ban on market conditions is quite clear. Liquidity in the market for financial stocks drained away and trading costs rocketed. Trading volume on the order book fell noticeably at a time when volume in stocks not subject to the ban rose. Critically, we find that the cost of buy orders and sell orders increased approximately equally, and that the numbers of market buy and sell orders fell by similar amounts. In other words, the ban raised the cost of trading and reduced the volumes traded but did not alter the balance of buy and sell orders. This suggests that long-sellers were the real drivers of negative sentiment towards financial stocks. Moreover, if high selling pressure on financials was the real reason behind the ban, its introduction did nothing to alleviate this pressure. Other market quality indicators were significantly worse during the ban. The fall in liquidity resulted in higher price impacts following a trade, reduced market efficiency and a smaller price discovery role for trading. The ban served to make the trading process less rather than more informative. We demonstrate that the reduction in liquidity and market quality persisted though the relatively long-lasting ban on short selling in the UK. Furthermore we observe strong reversals coincident with the lifting of the ban. Together these suggest that the effects we identify were indeed caused by the ban rather than other major market developments such as the introduction of TARP in the US since the latter were concentrated in the early days of the UK’s ban. We can also draw some inferences regarding the behaviour of short sellers from our findings. At the time of the ban, short sellers were often portrayed by commentators as predatory consumers of (bid-side) liquidity who aggressively sold financial stocks (presumably buying them back later on once their prices had dropped sufficiently). Their removal was thus justified in that it would allow stability back to markets as potential buyers of stocks faced reduced risks of being preyed upon. The academic literature, conversely, typically portrays short sellers as more passive (offer-side) liquidity suppliers, willing to sell an asset if its price rises ‘‘too far’’ and so helping to correct over-exuberant markets. Removing thistype of market participant would only serve to reduce liquidity and worsen market quality. Our findings suggest strongly that the behaviour of short sellers is best captured by this second portrayal, even in the volatile last few months of 2008.