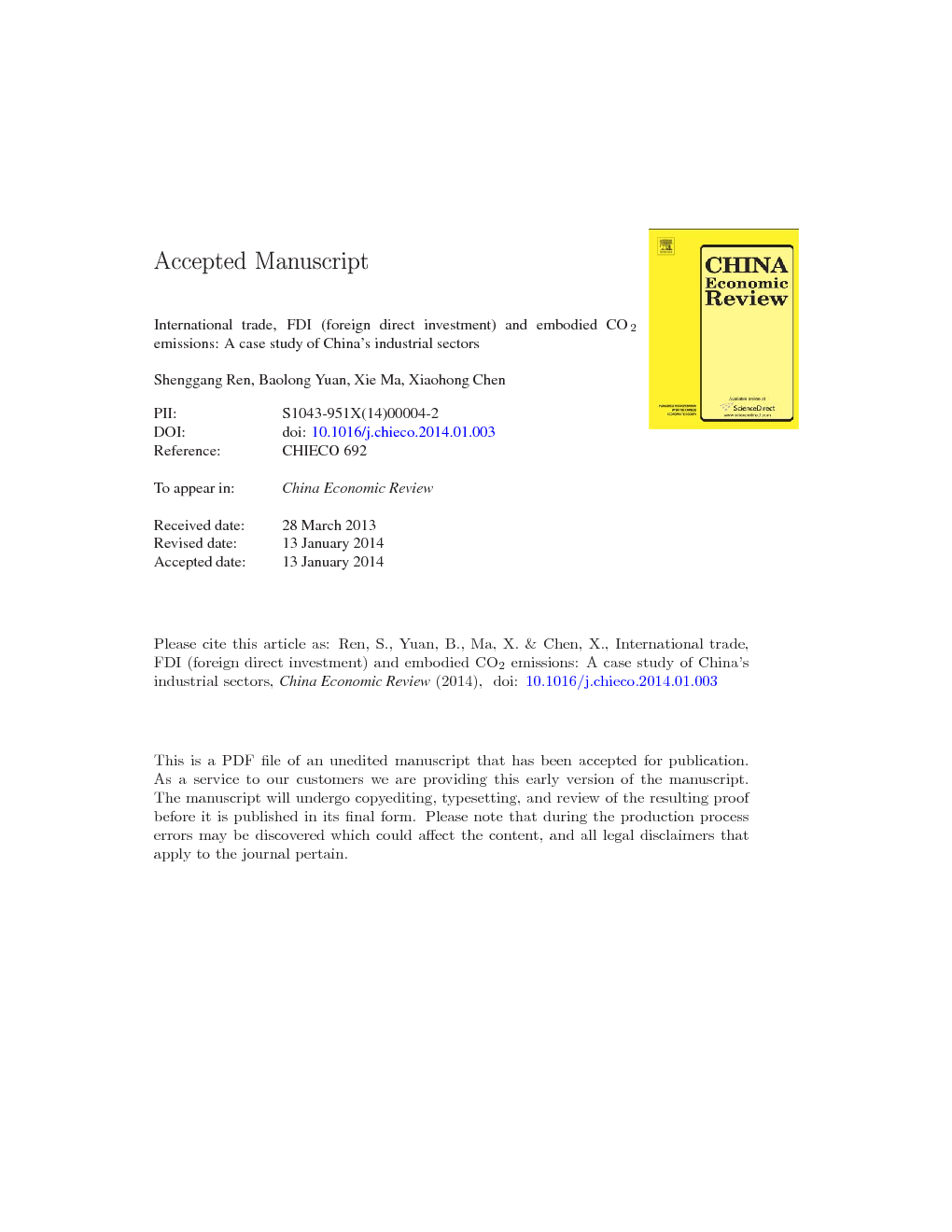 Who should take the primary responsibility for greenhouse gas emissions? Countries producing the products and services or the consuming countries? The developing countries will naturally suffer environmental degradation when they emit CO2. These issues have led to extensive and heated debates all over the world. At present, research on the relationship between economic opening up (globalization) and environment has focused on the test of pollution haven hypothesis (PHH) which predicts freer trade will result in the creation of PHH in developing countries as pollution-intensive firms are transferred from developed countries that impose stringent environmental regulations to developing countries. As a result, developing countries become more polluted with opening up and FDI inflows. A report from the Ministry of Commerce of China (2012) showed, in 2011, China's exports and imports accounted for global share’s 10.4% and 9.5%, which respectively remained largest and the second largest for three consecutive years in the world. After entering into the new millennium, China experienced a steady FDI inflow increase. According to OECD (2011), China was second FDI recipient in 2010 with an annual inflow of FDI amount to about 1,476,400 million US dollars behind the United State at the same year. However China's remarkable openness process seems to be accompanied by obvious environmental pollution problems. CO2 emissions have accompanied the rapid economic growth Since China's reform and opening up began. The emissions increased from 1,460 million tons (MT) in 1,980 to 6,499 MT in 2007 (Guan et al., 2008 and Guan et al., 2009). According to the International Energy Agency (IEA) statistics, China’s carbon emissions accounted for 26.9% of global emissions. Due to the coal-dominated energy consumption structure, China’s industrial sector is still the main source of carbon emissions. During 1995–2008, industrial consumption of coal continued to rise with industry consuming 95% of all coal consumed in 2008. Aiming at obtaining a better understanding on the trade and FDI-environment nexus, this paper analyzes CO2 embodied in trade and constructs a single multivariate framework, the variables of which include the per capita income, imports and exports trade and FDI with respect to the impact of FDI and trade on pollution. This model is then tested by the panel data of 18 industrial sectors during the period 2001–2010, during which trade and FDI inflow experienced the most important increase, to determine whether China has become a pollution haven. The remainder of this paper is organized as follows. Section 2 shows the literature review; The input–output analysis (IOA) and econometric model are described in 3 and 4 describes data sources and data processing methods used in this research; Section 5 discusses the empirical results. Conclusions drawn and the direction for future work are finally summarized in Section 6.

We adopt the single regional input–output analysis model to analyze carbon emissions embodied in China's international trade during the period 2000–2010 and empirically examine the main factors influencing carbon emissions. Our main research conclusions are as follows. Firstly, China's growing trade surplus is one of the important reasons for the rapidly growing CO2 emissions. From Fig. 2, we can see that the net CO2 emissions embodied in China's foreign trade follow the growth trend of China’s trade surplus. During 2005–2010, China's trade surplus increased from $102 billion to $181.76 billion while net CO2 exports increased from 2,130.5 Mt to 2,821.6 Mt. This may indicate that the rapid growth of China's CO2 emissions is inseparable from the growing trade surplus. Consequently, a large part of CO2 emissions occur in China but the related commodities are consumed by foreigners. Secondly, from results of the econometrics regression, we can see that the total effect of foreign trade is negative for China because it increases carbon emissions, and FDI has a significant positive effect on CO2 emissions. The coefficient means that although the rush of trade openness and foreign investment can promote China's economic development, it contributes to high levels of pollution. So, we can’t deny the possibility of PHH existing in China. Our results seem to not support the halo effect of FDI which argues that FDI will tend to spread greener technology to host countries for environmental improvement of developing countries (Pao & Tsai, 2011). Besides we confirm the existence of an Environmental Kuznets Curve in China under free trade, and the correlation between per capita income of China and industry emissions shows an inverted U- shaped curve. Based on the above research conclusions, we put forward the corresponding policy recommendations: First, strengthen the adjustment of the export product structure and improve the trade growth mode. Through different export drawback policies, export tariffs and other means, the government should encourage exports of products of low carbon emission industries and limit or ban exports of products with high carbon emissions. As China's main industries, exports of mechanical and electronic products and chemicals and textiles are necessary but we ought to upgrade to high value-added products for exports. Importantly, we should enhance environmental technology's imports and link energy and pollution intensive products' exports to imports to improve CO2 emissions. In addition, guide the upgrade of the processing trade and ease the adverse influences on the environment caused by exports' rapid growth. Second, adjust the composition of foreign investment (in terms of industry segments) to make sure industries set up with FDI are environmentally sustainable. Foreign capital should be used for promoting the industrial technical level and the efficiency of resource utilization. China should encourage foreign capital to enter the industry with low consumption of resources and little environmental pollution and guide foreign capital to upgrade and alter traditional industry with heavy pollution and huge resource consumption (Xia and Wei, 2012).With formulation of unified national environment protection policies, various domestic regions ought to avoid competition for foreign capital for the sake of local economic development and only choose high-quality investments. Furthermore, it is advisable to reinforce industrial guidance for foreign investment and encourage foreign investment to flow into environment-friendly industries, such as ecological agriculture, service industry and so on. Besides,restrict and prohibit projects which bring about serious pollution (for example, nonmetallic mineral industry, textiles, papermaking industry, etc.), and replace pollution control with pollution prevention to strive to nip pollution in the bud before the production process. Third, as its energy efficiency is still very low, China should reinforce international cooperation and make good use of market mechanism to develop a carbon trading and carbon sink economy. On one hand, it should actively participate in the international CDM project, to reduce the use of coal, improve terminal energy efficiency and reduce the carbon emission coefficient. On the other hand, use market mechanisms such as carbon emissions trading and carbon sink economy to allocate reasonably CO2 emission rights among enterprises; meanwhile environment-friendly products should attract lower taxes and import tariffs, in order to encourage their consumption. This study provides a theoretical basis for formulating policies which can help China shape its international trade and introduce environment-friendly foreign investment. However, there are limitations in this paper, which needs further discussions in the future. OECD input–output table data were available for only get two years (2000, 2005), so any other year's IO tables had to be obtained by approximation. Definitely, this must have caused some deviations. Overall, research in this field is still in the initial stages at present. In view of China's regional differences, future discussions can focus on environmental effects from international trade and FDI.